Culture Secretary Oliver Dowden joined a number of outspoken critics of the ECB’s suspension of Ollie Robinson on Monday following the discovery of the England debutant’s offensive tweets between 2012 and 2014. But the decision to give the player, the organisation and the cricketing fraternity a moment to consider the full picture is absolutely the right move.

Robinson’s Test debut against New Zealand at Lord’s last week was marred when Twitter users shared some historical tweets of the 27-year-old’s which painted him in a pretty terrible light. To simply dismiss them as “decade old” ramblings from a teenager who has now apologised and claim “the ECB has gone over the top by suspending him”, as Dowden did via Twitter on Monday, is to attempt to skirt around the issue.

The fast bowler’s perfectly-worded PR-speak apology after the opening day’s play on Wednesday might have actually been heartfelt, but we cannot know that for sure. Just as the ECB should have taken more time to unearth and address his social media behaviour and damaging views long before he was called up, they must now spend time investigating Robinson’s current frame of mind when it comes to racism, Islamophobia, sexism and the other horrible views he expressed in the various tweets shared over the past week.

Yes, he was young when the tweets were written – between 18 and 20 years old over the more than two-year span – and a further seven years developing as an adult and a cricketer may well have matured him and helped to bring his views into the 21st century.

But there can be no simple catch-all statement of “He was just a kid”, no “We all did daft stuff when we were 18”, because do you know what… there are people much older than 27 who are racist, who are sexist, who do put down those with mental or physical disabilities. Not everybody automatically becomes more tolerant between the age of 20 and 27, and so it is imperative that the ECB takes time to come to a decision on whether Robinson truly has learned his lesson. 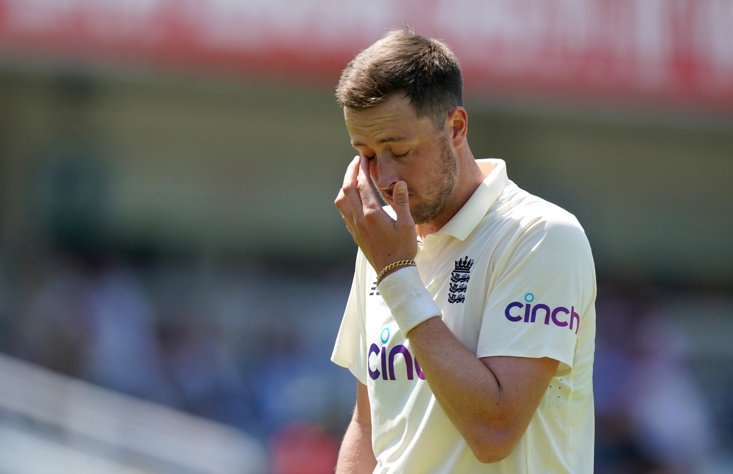 To have allowed him to just turn in a carefully-written apology and then step out at Edgbaston on Thursday for the Second Test as though all was forgiven would have been severely damaging to an organisation and a sport that still has so much to learn when it comes to equality.

It was lost on nobody that the Robinson episode came to light on the same day that the ECB had led an anti-discrimination drive which saw England’s players wear black t-shirts proclaiming that ‘cricket is a game for everyone’ with messages on the back talking of the team, and the game, standing together against racism, homophobia and various other discriminatory practices.

Now the ECB has the chance to match the words with actions, and in suspending Robinson for as long as it takes to be satisfied that he truly has learned the error of his ways, they have taken the first step to proving that they mean business in rooting out the elements of society which embarrass us all.

Hopefully, they will find that Robinson meant every word of his statement and the bowler will be back soon to follow up on his excellent figures of 7 for 101 and a valuable 42 with the bat on debut. But it is only right that the game’s governing body take the matter incredibly seriously.

Robinson might have been young then, but he was still a man. It might have been between seven and nine years ago, but he must still answer for his abhorrent actions. And only when those investigating are 100 per cent satisfied that he is of a very different mind to 2014 should they welcome him back into the international cricket fold.

x
Suggested Searches:
Manchester United
Liverpool
Manchester City
Marcus Rashford
Premier League
More
cricket
England's All Too Predictable Batting Collapse Costs Them Test...
Another inevitable England batting collapse. On a strangely sunny Monday morning in early September, [ ... ]
cricket
Consistency Now Key As England Look To Repeat Headingley Heroics
“Just when I thought I was out, they pull me back in…” There was a moment there where [ ... ]
cricket
England's New Look Line-Up Already On The Back Foot As India...
In the week that saw Lord Ian Botham appointed trade envoy to Australia, England’s current crop [ ... ]
cricket
Without Everyone Playing Their Part, England's Cricketing Struggles...
Former England Test cricket bowler Ryan Sidebottom believes England can enjoy success again if the whole [ ... ]
cricket
England's Batting Line-Up Is Shoddy, But The Lack Of Depth Is...
An Englishman with a bat in front of three sticks of wood has now become as nervy of a spectacle as [ ... ]
cricket
England's Final Day Defeat To India Was Inevitable, And Root...
A disaster. A shambles. An embarrassment. Several words have been used to describe England’s fifth [ ... ]
cricket
Rain And Root Deny India, But England Can't Keep Relying On...
In the end, the rain finished off the job Joe Root had started. The First Test between England and India [ ... ]
cricket
The Greatest Test Match: England's 2005 Edgbaston Ashes Win...
It felt like the peak of Test cricket at the time. Arguably, it remains the greatest ever game in the [ ... ]
cricket
Time For Joe Root's England To Find Some Consistency - Sidebottom
Former England Test bowler Ryan Sidebottom insists that Joe Root’s side must turn in a stirring [ ... ]
cricket
Ben Stokes' Break From Cricket Highlights The Strides Made On...
It is a truly wonderful thing that Ben Stokes will not be in England’s Test squad to face India [ ... ]
cricket
Ryan Sidebottom: England's T20 Hopes Have Received A Huge Boost...
We’ve seen the likes of Jonny Bairstow, Ben Duckett and James Vince flashing the bat to great [ ... ]
cricket
Ryan Sidebottom: The Hundred Is ''Off To A Great Start'' After...
Ryan Sidebottom believes cricket's divisive new tournament 'The Hundred' proved [ ... ]
cricket
Ryan Sidebottom: Why The Hundred Is A Game Changer For Women's...
For women in particular, The Hundred is huge. Ahead of the first ball being bowled it has had its doubters [ ... ]
cricket
England Can Dream Of Another World Cup Win, Two Years On From...
“By the barest of all margins.” The inimitable Ian Smith couldn’t have summed it up [ ... ]
cricket
The Newcomers Looking To Help Fire England To An ODI Win Against...
An inexperienced England are facing a huge test as they have been forced to name a brand new 18-man [ ... ]
cricket
Perennial Finalists New Zealand Finally Come Good To Win World...
New Zealand finally got the job done. In 2015 they were the entertainers of the tournament at the Cricket [ ... ]
cricket
Sophia Dunkley Is England's Newest Cricketing Icon That Can...
Sophia Dunkley is a history maker. She became the first black woman to play Test cricket for England’s [ ... ]
cricket
New Zealand Bring Desire, England Are Just Dire As First Test...
When New Zealand could have batted for a draw, they went hell for leather on the final day at Lord’s. [ ... ]
cricket
''I Can Still Improve'' Jimmy Anderson Part Of Resurgent Older...
Whisky. Fine wine. Jimmy Anderson. Just three things that get better with age. England’s highest [ ... ]
cricket
World's Best Cricketer Ben Stokes Has Become England's Imperfect...
If there is one thing the British public love more than an underdog story, it is a tale of redemption. [ ... ]
cricket
England Just Fall Short Against India Despite Sam Curran Heroics...
England came up short against India, losing by just seven runs in an absolutely thrilling ODI decider [ ... ]
cricket
England’s Aggressive Batting Pays Off As Bairstow And Stokes...
When England’s top three bat like this, there is simply no side in the world that can stop them. [ ... ]
cricket
Three Years On, Steve Smith Deserves Big Praise For His Response...
On this day three years ago the entire sporting world collapsed on Steve Smith’s shoulders. In [ ... ]
cricket
Root's Calm Head Missed As England Collapse To 66-Run ODI Loss...
India have defeated England by 66 runs in the first one-day international in a game that will once again [ ... ]
cricket
India T20 Win Over England Could Be Perfect Precursor To 2021...
England have lost the T20 series in India 3-2 having been comprehensively beaten in the final match. [ ... ]
cricket
Blistering Buttler Leads England To Bounce-Back T20 Win Over...
England showed their resilient side on Tuesday as they bounced back from Sunday’s defeat in the [ ... ]
cricket
Kohli Takes Centre Stage As England Come Up Short Against India...
England came up short in the second T20I match v India, losing by seven wickets as Virat Kohli proved [ ... ]
cricket
Archer And Roy Star As England Sweep India Aside In Opening...
England began Twenty20 World Cup year in emphatic fashion as they hammered India by eight wickets in [ ... ]
cricket
Weather No Excuse, England Must Learn From Woeful Batting Performance...
How quickly things can change. England’s 227 run win in the First Test v India feels like a lifetime [ ... ]
cricket
Why A Massive Fourth Test Against India Could Define England's...
England’s whole year might well ride on the outcome of Thursday’s Fourth Test against India. [ ... ]