WOW. Just wow. What a game of Test cricket!

England’s men really put us through the ringer when they bravely clung on to salvage a dramatic last-wicket draw against Australia with their Ashes series well and truly lost.

But England’s women’s hopes of ending an agonising eight-year wait to win their own Ashes series is very much alive.

Captain Heather Knight’s courageous side came within a whisker of somehow winning a Test match which had looked destined to be drawn after rain decimated the penultimate day's play.

But, in arguably one of the most incredible finishes cricket has ever seen, England finished just 12 runs short of chasing a record fourth score of 257 for victory from 48 overs.

And after an amazing chase –  and with just one wicket remaining – they somehow then clung on for 12 balls at the death as holders Australia nearly won themselves.

A victory for the hosts would have seen them retain their title, but now the series will be decided in the remaining 50-over One Day Internationals over the course of the next eight days.

A staggering 449 runs were scored on the final day’s play of this Test, with 14 wickets having tumbled as the crowd were treated to some thrilling action. But for England it’s really a case of what might have been, having come close to winning the match, especially having needed just 45 runs from 60 balls before wickets tumbled in alarming fashion.

A victory would have seen them head into the ODIs with a healthy two-point lead. And while emerging with a draw keeps the series alive, it’s arch-rivals Australia who hold the advantage heading into the one-day contests.

“The way we went for the game made me really proud,” reflected Knight. ‘I am just frustrated [we didn’t win].” 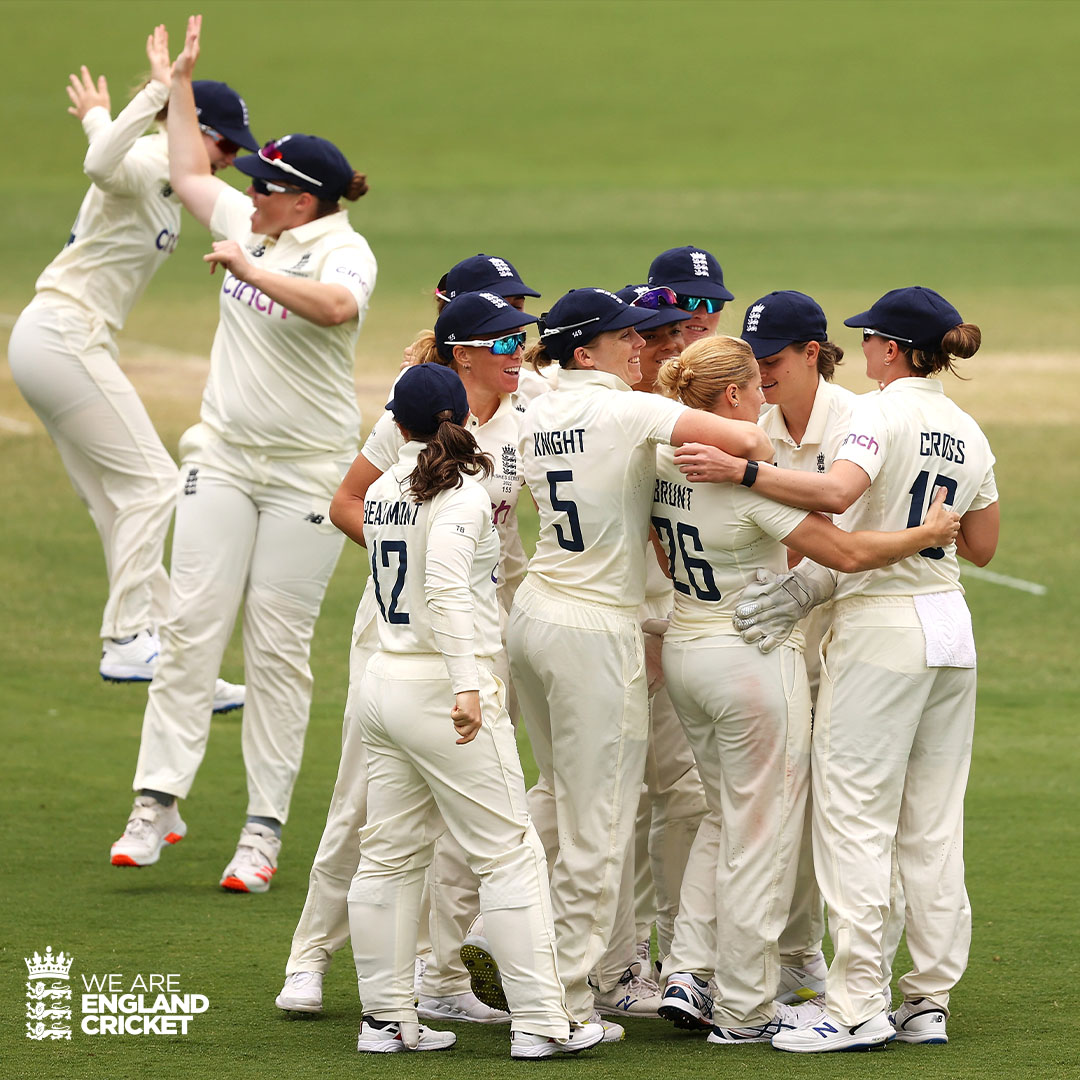 Australia resumed on 12-2 on the final day, effectively 52-2 after their first innings lead of 40.

Early wickets were crucial, but Beth Mooney compiled a patient 63 from 137 balls for Australia and star all-rounder Ellyse Perry chipped in with 41 from 83 balls as the pair shared in a battling third-wicket stand of 91. But seamer Sophie Ecclestone had Perry trapped lbw and 20 runs later Charlie Dean pinned Mooney with a similar dismissal, as the game swung in England’s favour.

Australia skipper Meg Lanning was dismissed by pace bowler Katherine Brunt before Ashleigh Gardner’s 38 from as many balls, and Tahlia McGrath’s 34, helped the home side rebuild and reach the 200 mark.

Australia could have batted on with three wickets left and made the draw the most likely outcome. But credit to Lanning who instead declared to set up a grandstand finish.

The pressure was on England to chase the runs, but balanced with the worry that if they pushed too hard the Ashes would be lost. Lanning was desperate to win as her side looked to wrap up proceedings before the ODIs. And so the final day of action proved to be one of the best in living memory as the match ebbed and flowed right up until the final ball was bowled.

Openers Lauren Winfield-Hill (33) and Tammy Beaumont (36) shared a 52-run first-wicket stand as England started brightly, and then Winfield-Hill and skipper Knight put on 42 for the second wicket before the former was dismissed by Perry.

Knight, who scored a stunning 168 not out in England’s first innings, was in the runs again with 48 from 54 balls. She shared a fine third-wicket partnership of 72 with Natalie Sciver, England’s top-scorer with 58. But when Sciver was out at 218-4 – and with England seemingly poised for an historic victory – they suffered a horrible battling collapse.

They somehow conspired to lose six wickets for 26 runs and, ultimately, were forced to cling on to keep the series alive.

Number 11 Kate Cross faced 12 balls at the end and blocked out a nerve-racking final over.

With 12 balls left and 12 runs needed England could have still won, but that was asking a huge amount from the team’s tailender.

“We were in such a great position,” admitted Knight.

"It has been an amazing Test. We stood toe-to-toe with the Aussies throughout the game. What a win it would have been."

A view echoed by Aussie captain Lanning who admitted: "I did go through the thoughts that we were done. I went through all the emotions.

“They [England] were doing it easy and there didn't look like any way through. They batted extremely well and it was hard to stop them scoring.

"[But] to be able to fight back as a group and nearly flip it on its head was pretty amazing."