Cricket
News
Broad and Anderson have both been left out of the West Indies tour
Shane MacDermott
10:30, 13 Feb 2022

England have become the laughing stock of world cricket this winter.

It was a shocking showing Down Under as the men’s, women’s, and A teams failed to win a game. They lost 14 out of 19 matches collectively, with five draws, as they were humiliated.

The Ashes aftermath is already in full swing and it’s been a busy week at ECB headquarters. Director of Cricket Ashley Giles, Head coach Chris Silverwood, and batting coach Graham Thorpe had already been sacked whilst CEO Tom Harrison somehow kept out of his job.

And the first question fans who endured a tough winter want to know is; what does the future hold for English cricket?

Well…Andrew Strauss has replaced former team-mate Giles on an interim basis. A safe pair of hands to rebuild the wreckage, or so you’d think.

Alongside Interim Head Coach Paul Collingwood and Head Scout James Taylor, Strauss understandably swung the axe on the failed Ashes squad which returned to England embarrassed and with their tail between their legs as they announced the 16-man squad for next month’s trip to the West Indies.

Eight players were given the boot, but two names left people scratching their heads. England’s greatest ever bowlers James Anderson and Stuart Broad, who boast an incredible 1,177 Test wickets between them were unceremoniously omitted from the tour. Will a painful 4-0 Ashes defeat be the last time we see the two greats play for England? Many sincerely hope not.

Yes, England need to look to the future beyond their veteran seamers. But is now the right time? When you’re desperate to restore some pride, I’d suggest not.

Using the tour as Strauss put it to “look at some exciting new bowling potential” is disrespectful to the West Indies. They are nowhere near the force they were during the 80s and early 90s. But England have only won a solitary series in the country in the past 54 years.

Broad had it right during the fateful Ashes when he said “you need to look at winning the next match, not winning in 18 months”. For a team who were humiliated in Australia the time for winning is surely now. 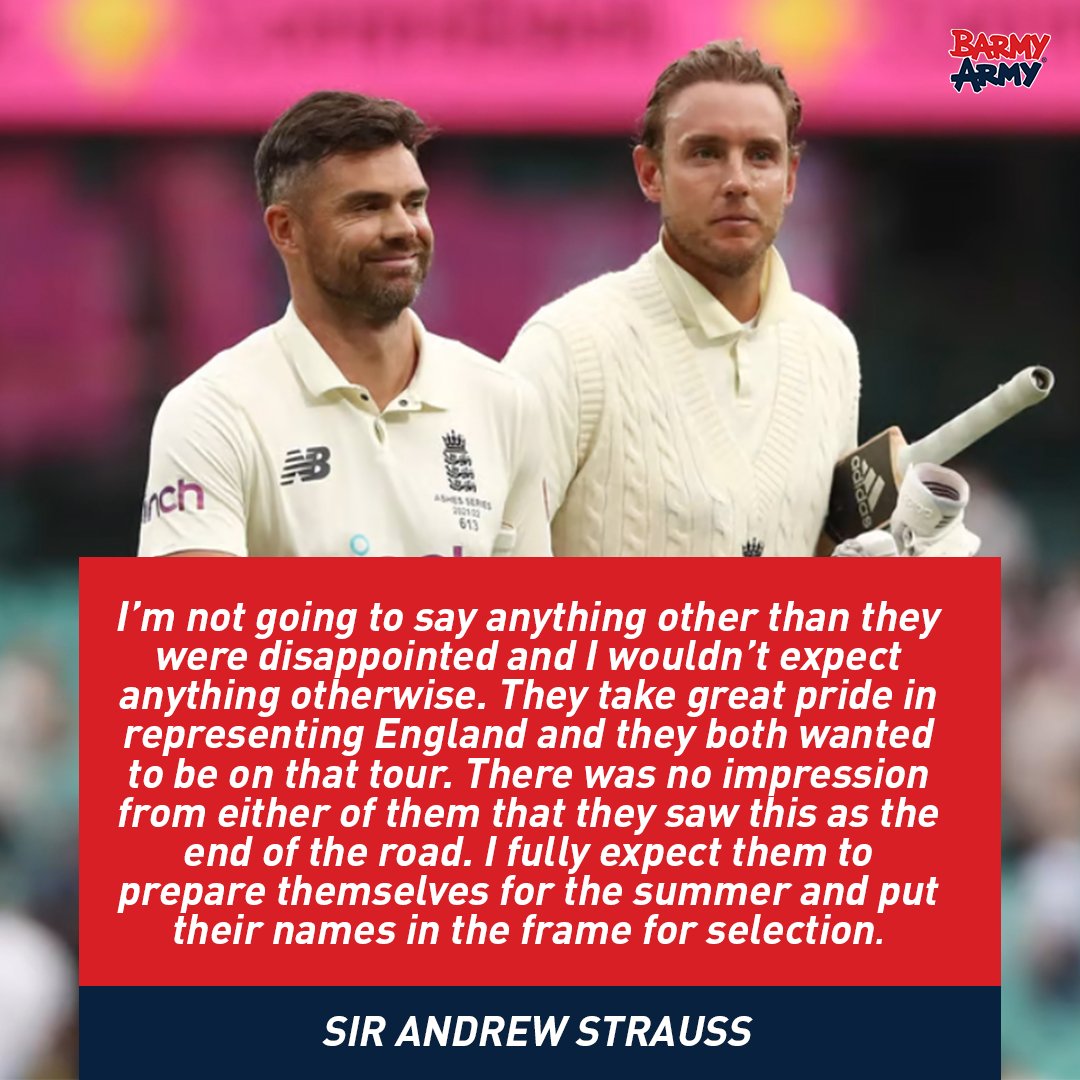 What is the vision for this hastily put together new-look England cricket team?

Strauss, who was captain when they last topped the Test rankings over a decade ago, says: “The selection of this squad is the start of a process and a journey to get England Test cricket back to where it needs to be - and the hard work starts now.

"With the start of a new cycle, it has allowed the selection panel to refresh the Test squad with a particular focus on competing away from home. We felt that it was time to draw a line after the Ashes defeat, look forward and give some impetus with an influx of new players.”

But what will change? And when will the deep-rooted issues which have plagued England over the past few years in the men’s and women’s games be addressed?

Bubble life understandably took its toll on England’s players. They spent most time out of any country locked away in hotel rooms during the Covid-19 pandemic. The likes of Ben Stokes and Jos Buttler also played in the Indian Premier League, it was a tough slog.

With franchise leagues around the world, alongside the heavy schedule England have on the international circuit and the introduction of The Hundred, do their all-format stars play too much? They certainly seem burned out when they arrive in the Test arena.

Talisman Stokes took a break to protect his mental health last year and he, as well as captain Joe Root, withdrew from this year’s IPL Mega Auction to prioritise England’s Test fortunes. About time someone put the country’s red-ball team first, because administrators haven’t for some time.

In the women’s game, England headed to Australia full of confidence ahead of their Ashes campaign with their 50-over World Cup title defence also on the horizon.

But now they look like they will be also rans in New Zealand, with Meg Lanning’s Australia the overwhelming favourites to land the sacred prize.

It seems like a lifetime ago when they were lifting the trophy aloft at the Home of Cricket in 2017. Big stars like Heather Knight, Tammy Beaumont, Katherine Brunt and Anya Shrubsole are still at the forefront of the side, but where is the next generation of greats coming from? Australia have unearthed Tahlia McGrath who is already filling the sizeable shows of Ellyse Perry. England are being left behind.

England’s under-fire sides simply have to close the widening gulf between themselves and the Aussies by the time they come over in two years. Failure to do so would be a catastrophe for the sport.