England's 'new era' under Chris Silverwood got off to a humiliating start with a huge innings defeat to New Zealand on Monday.

In Silverwood's first Test in charge following his appointment in place of Trevor Bayliss, England had started well with a strong first two days but then feebly collapsed as a stubborn Kiwi side ground them into submission.

While the two-match series in New Zealand is not part of the ongoing World Test Championship, Silverwood and Root will face a number of questions about their side's performance given the renewed sense of direction in the team selection.

Dominic Sibley was called up for his test debut after the failed experiment of Jason Roy opening during the summer's Ashes series, while Ollie Pope was brought in to bat at six.

But skipper Joe Root, with a new reworked batting stance which made him look more mechanical at the crease, managed to score just 13 runs in two knocks as the home side romped to victory by an innings and 65 runs.

Things appeared to start positively for England in their first innings as Rory Burns and Joe Denly built a steady partnership, with Silverwood’s side showing greater patience at the top of the order. But once Tim Southee found his range the paceman collected four wickets and England were restricted to 353 despite a 91 for Ben Stokes.

New Zealand then overcame a slow start with the bat which had seen them amble to 127-4, with a double century from wicketkeeper BJ Watling and a ton from Mitchell Santner taking them to a declaration with their score at 615-9.

Having lost three wickets early on in their second innings, England came out on day five with needing to bat through the day to save the test. But captain Root again fell early and Stokes, Pope and Jos Buttler were all dismissed after questionable shot selection given the need to bat long and the tourists were skittled for 197.

England Cricket
@englandcricket
We learn and move on.
Scorecard:
#NZvENG 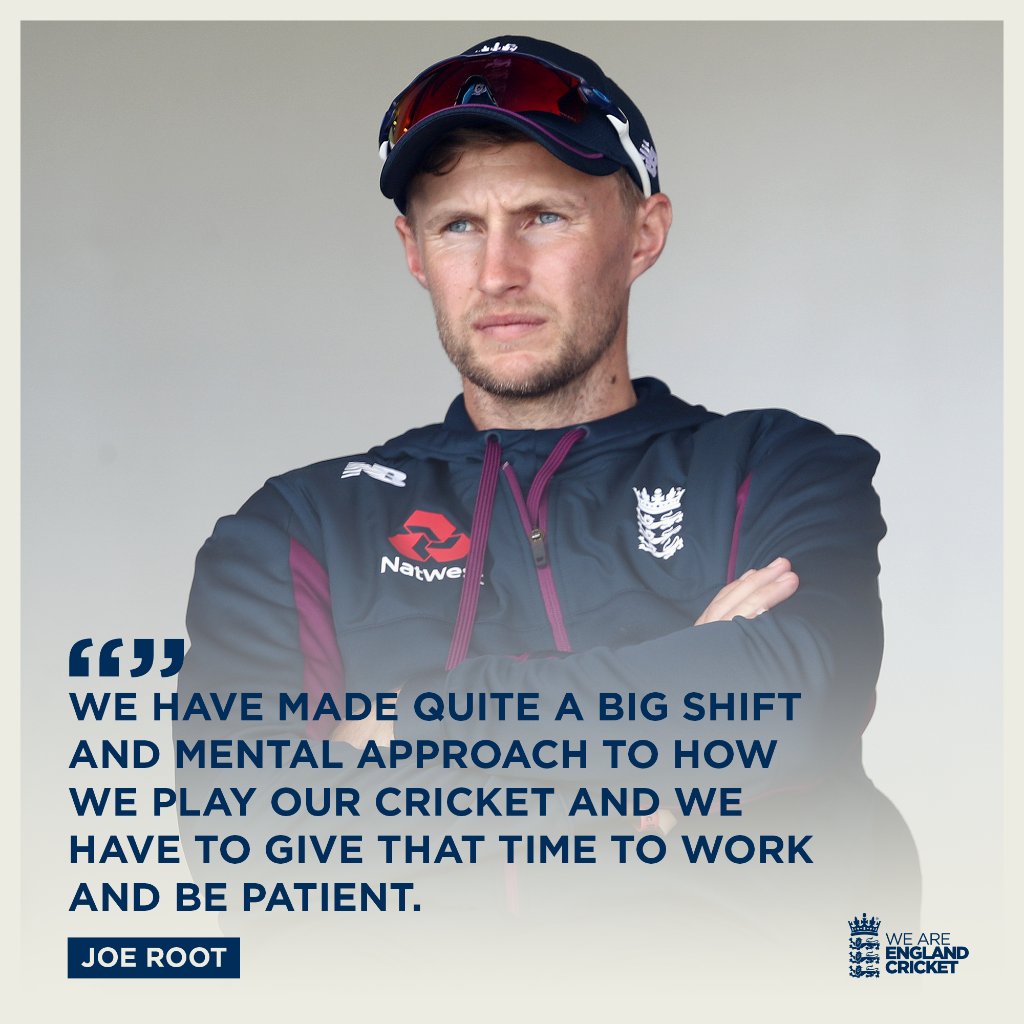 Joe Root was upbeat following the defeat, despite his own poor performance individually and the inability of his team to turn good starts with bat and ball into a dominant position.

"We did a lot of good stuff - we just need to do it for longer. It's different to the style of cricket we've had to play in our home conditions,” he told the BBC.

"We can't panic and think it's the end of the world. We are working hard behind the scenes and if we come back strong, we'll hopefully level it up."

Silverwood will be hoping he can produce a better performance from his side in the second test, which begins at 10 pm GMT on Thursday night in Hamilton.

After that match the team head to South Africa for a four-test series which begins with the Boxing Day Test at Centurion.

x
Suggested Searches:
Tyson Fury
Manchester United
Marcus Rashford
Lewis Hamilton
F1
Air Jordan
More
cricket
The New Book Shining A Light On The Biggest Scandal In Cricket...
It has been nine years since the News of the World ceased publication. Nine years. Doesn’t time [ ... ]
cricket
How Botham And England Revived The Spirits Of A Nation At The...
In the summer of 1981 a combination of spiralling unemployment and racial tension had led to riots in [ ... ]
cricket
Ben Stokes Inspires England Victory In Five-Day Test Classic
This was five-day test match cricket at its finest. Ben Stokes took the final three wickets on Tuesday [ ... ]
cricket
Batting Legend Tendulkar Warns ICC Five-Day Tests ''Should Not...
If you’re looking for a cricket batting record, odds on Sachin Tendulkar probably owns it. The [ ... ]
cricket
England Head To South Africa Test In Search Of Answers And A...
England end a historic 2019 by taking on South Africa in the First Test in Centurion this week. But [ ... ]
cricket
England World Cup Winner Moeen Ali's Conscious Uncoupling From...
“I just want to get that buzz back”. England’s Moeen Ali has continued to put [ ... ]
cricket
England Fail To Win A Test Series In A Calendar Year For First...
England have lost another Test series in 2019, which brings to a close a difficult 12 months that has [ ... ]
cricket
Joe Root Double Century Gives England A Glimmer Of Hope Against...
Joe Root hit a stunning double century to give England a slight hope of victory against New Zealand [ ... ]
cricket
Pope Steps Up After Baffling Selection Leaves England Short...
It is ever difficult to predict exactly what will unfold when England go on tour. Ollie Pope, a man [ ... ]
cricket
Book Review - Ben Stokes: On Fire
Like rugby, cricket fancies itself as a bit of a proving ground for leadership and performance techniques, [ ... ]
cricket
Ben Stokes Throws His Weight Behind ''England's Best'' Joe Root
Ben Stokes has leapt to the defence of under-fire England Test captain Joe Root following the heavy [ ... ]
cricket
The Time Has Come For Joe Root To Step Down As Captain And Focus...
Joe Root loves a soft dismissal these days.  Should England decide to move him aside as captain [ ... ]
cricket
Steve Smith's Welsh Fire To Face Oval Invincibles In First Game...
Steve Smith and Jonny Bairstow will clash with Jason Roy and Sam Curran in the world’s first-ever [ ... ]
cricket
Why England's T20 Triumph Over New Zealand Matters More Than...
There could not have been a more fitting antidote to the slightly subdued atmosphere surrounding England’s [ ... ]
cricket
Silverwood Over Kirsten Is The Right Choice For England's New...
England have confirmed the appointment of Chris Silverwood as their new head coach to Trevor Bayliss, [ ... ]
cricket
Why Ashes Win For Australia Could Be A Good Thing In Long Term...
It might well have been a headline from 2019. That famous obituary we all know so well, written [ ... ]
cricket
Five Things That Prove Steve Smith Ain't Perfect
Steve Smith. The best batsman in the world and seemingly impossible to get out from an English point [ ... ]
cricket
Manchester In The Rain: Five Things To Do When The Ashes Is...
Ah, Manchester. The proud home of The Sportsman is known throughout the world for its music, sport and [ ... ]
cricket
Ashes Hero Ben Stokes Must Be Considered Test Cricket's Best...
With every switch-hit, Ben Stokes eclipsed Botham of ’81. In the process, the third Ashes Test [ ... ]
cricket
England’s Lion Heart Jack Leach Is Granted Free Glasses For...
Specsavers have made good on Ben Stokes’ request to grant Jack Leach free glasses for life after [ ... ]
cricket
The Ashes: Why Staging A Test Is Vital To County Hosts
In the run-up to the Ashes, the talk has been about pitches. To be precise, it’s been about poor [ ... ]
cricket
England vs Australia: Evolution Of The Ashes Rivalry
The Ashes is one of the oldest and most compelling competitions in sport. Cricket’s famous test [ ... ]
cricket
Jofra Archer, Joe Denly, And Olly Stone Included In England...
Rarely does a 143-run victory give ECB selectors so much food for thought, but a serious scare against [ ... ]
cricket
A Historic Moment For Irish Cricket As First Ever Test Against...
Two years on from being awarded Test status, Ireland head to Lord’s for a historic first meeting [ ... ]
cricket
Eoin Morgan, Shahid Afridi And Martin Guptill Among The Star...
Friday’s draft confirmed the make-up of the six teams taking part in the inaugural Euro T20 slam.  [ ... ]
cricket
Now For The Ashes: England’s World Cup Winners On The Brink...
How do you top it? Will there ever be anything quite like the magical disbelief of England’s victory [ ... ]
cricket
Redemption Song: How Pantomime Villain Ben Stokes Became A National...
Anguish is an emotion that lights up Ben Stokes’ face in the big moments. Not one to shy away [ ... ]
cricket
Eoin Morgan’s Personal Journey Is The Great Story Of England’s...
It does not get any closer than that. For Eoin Morgan and his men, the tournament ended in the most [ ... ]
cricket
India Have Big Questions To Answer After Cricket World Cup Exit...
This was a semi-final lost in the first three overs of the second innings. A night can change a lot [ ... ]
cricket
Trevor Bayliss Backs England To Deliver When It Matters
Since Trevor Bayliss took over as England head coach in 2015, a global tournament [ ... ]