Horse Racing
News
We take a look at some of the outsiders who could make a mark at the Cheltenham Festival
Will Dowie
08:35, 12 Mar 2022

The Ultima Handicap Chase has usually been a ‘home banker’ in recent years with the last 15 winners being trained in Great Britain. However, this year, the Irish challenge looks stronger than ever with almost half the field thought to be made of horses from across the Irish Sea.

Following that, I’m backing one of these Irish raiders to spoil the British party on day one with School Boy Hours for Noel Meade. An impressive winner of the Paddy Power Chase in Leopardstown last time out in December, staying on particularly well in the latter stages to take it up from Ben Dundee. The form of that race has been well advertised since with multiple winners coming out since, such as the 5th Death Duty and 6th Birchdale.

Going back to his beginner's chase form, the mark of 142 doesn’t look particularly harsh. He was 2nd to Latest Exhibition who went on to be placed in a Grade 1 Novice Chase behind Monkfish and also 2nd to Eklat De Rire who went on to win a Listed race in Wexford, so the form stacks up.

He, unlike many, hasn’t seen his mark increased by the British handicapper, so gets in off his Irish mark and whose record over 3m over fences reads: 231. The race itself looks competitive as any handicap at the festival but Noel Meade has finally found the optimal trip for the 9-year-old. He’s a decent each-way price at the current time of asking, and you always know that the JP McManus team have their eye towards the festival, maybe this is the handicap good thing. 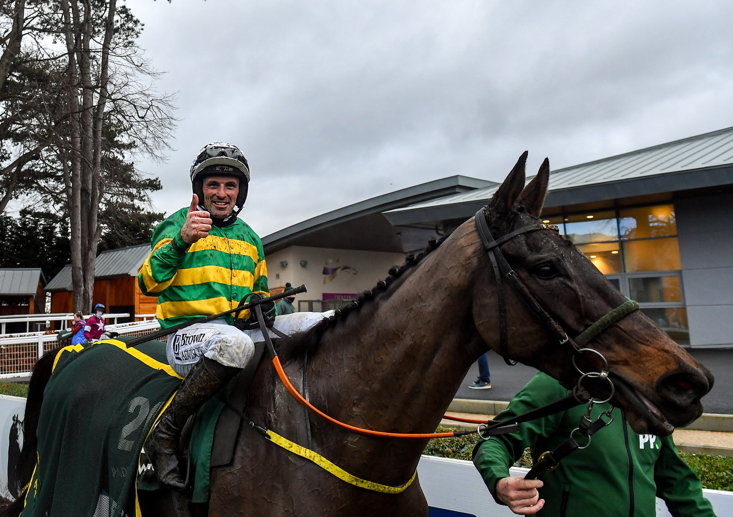 Firstly, it’s worth saying that this is probably the most competitive handicap at the whole festival with many of these being seen to be ‘well in’. None more so than the current favourite Gaelic Warrior. The French challenger has moved to Willie Mullins’ yard since his last start and the team in Closutton are reportedly shocked that he has got a mark of just 129.

If you translate his hurdles rating in France directly over here, his ‘fair’ mark would be 139, so on that basis alone, he could be absolutely chucked in. I can see him going very close, but he’s been well and truly found in the market, currently a 9/4 shot in what will be a 20 plus-runner field.

While I respect his mark and the genius who has picked him up, this is just way too short and couldn’t possibly get involved given over half of these will be improving and be comfortably better than their current handicap mark. The one I have fallen for is HMS Seahorse for Paul Nolan. He’s a 9/1 poke, with his price constricting in recent days but I still think his price still holds a little bit of juice.

He’s had three starts over hurdles, progressing each time and the win last time out was particularly impressive. He still looked green at times but the way he put space between himself, and his rivals was eye-catching. The form of that has worked out well since with the 2nd Global Export winning by 5l next time out at Navan.

He also has already met a few of the main market principals earlier in the season coming 2nd to the well-fancied The Tide Turns. He was only 2 & 3/4l behind him that day and that was off level weights. Next week, he meets him getting a 9lb pull which will see them closer, if not reversing the form. The 4th that day was Brazil but also gets the same weight pull as him in this so it’s surprising to see both of those shorter than him in the betting. I think the 4-year-old has been overlooked due to being trained at a smaller yard than some in here but he’s a horse that’s bred to win classic events on the flat so has a huge engine and I think he offers a nice each-way alternative to the short-priced favourite.

The Joseph O’Brien runner went off a 9/2 favourite in this race last year off 1lb lower when unseating early when travelling nicely, so it’s a surprise to see him being offered at nearly double the price here. His form on paper maybe doesn’t look as sexy as it did last year but it looks a bit of a plot running him against the top-level chasers such as Riviere D’Etel and Blue Lord.

He was 3rd in a Grade 2 in Punchestown giving Riviere D’Etel over a stone. Riviere D’Etel runs on Tuesday so keep an eye out how she does in the Arkle, if she does win then people will start latching onto Embittered and I’m sure his price will plummet. He drops back into handicap company having raced at patent level all this season and the mark of 145 looks lenient. He has course form, which is important in these races, having come 3rd in a red-hot County Hurdle behind Grade 3 winners Saint Roi and Aramon. He’s in here off a mark of 145 which is still 1lb lower than his Hurdles mark, which would suggest that even despite the 5lb hike by the British handicapper, the 8-year-old is still well-handicapped. Barring a fall, it’s tough to not see him in the first five home.

The British handicapper has done his best this year to level the playing field and my selection here unfortunately has received the same treatment as many Irish raiders. The 8-year-old has been put up 7lb from his Irish mark meaning he’ll run in here off a mark of 144. The increase in the weight isn’t ideal but I don’t think that fully encapsulates the horse’s true potential.

Still a very lightly raced horse, he steps into this off only three starts over fences. In all three runs so far, he’s failed to finish outside the first three and although the run last time on paper maybe looks a little disappointing, a beaten 5/4 favourite, but it doesn’t tell the whole story.

Him and Champagne Platinum were miles clear of the rest and Rachael would probably want that race back having sent him too early just for him to get nabbed on the line. The form of that has been boosted since with the winner that day going on to be good 2nd in the Grand National Handicap Trial last month. In the two races prior to this, he’s been racing in hot fields facing top novices such as Stattler (who is well fancied for the National Hunt Chase) and Galopin Des Champs (who could go off favourite in the Turners’). While he hasn’t quite been up to that level, he has run with enough substance to show that a mark of 144 might not hold Ain’t That A Shame back. Hopefully Rachael Blackmore is aboard, rides quietly and then deliver him late to claim victory.

We’ll save the biggest and at the prices one of my best each-way bets of the festival until last. We’ll start with the negatives – Gordon Elliott’s record. He’s not won this in 11 years which is far from ideal but his team this year for the contest looks incredibly strong.

He will have one of the leading market fancies with Top Bandit, who will be the ride of Davy Russell and looks to hold strong claims in the contest having won three of his last four over hurdles including at the course in October.

He’ll be carrying a lot of money on his back and it's no surprise to see him near the top of the market, however at 7/1, I’m happy to look elsewhere and I’ve landed at Elliott’s other runner Gringo D’Aubrelle. He was 3rd on his only appearance in England in the Challow Hurdle finishing behind Ballymore-bound Stage Star. He didn’t get home that day over the 2m4f trip after travelling seamlessly throughout the race only to blow up in the last two furlongs, so the drop back in trip looks ideal.

On his last start, he faced leading Supreme fancy, Dusart Dynamo, where he was given a good beating by 19l in a Grade 2 but wasn’t given a tough time once it was apparent that he wasn’t going to get close to the Mullins superstar. Going back further to his hurdling debut, he was 2nd to Blazing Khal, who would have been a leading fancy for the Ballymore next week if he didn’t suffer an injury setback.

That horse is rated 147 and got within 3l that day off level weights over a trip that he didn’t see out. His subsequent run over hurdles, he managed to get his first and only win over hurdles at Fairyhouse. A race over two miles, he was sent off an even money favourite and duly obliged winning the contest by a cosy 3/4l. 2nd that day was Adamantly Chosen of Willie Mullins, who won by 27l next time out and 3rd that day was Ash Tree Meadow who also consequently so the form of that holds significant weight.

The Irish rating of 130 alone looks incredibly lenient so I’m not surprised to see the British handicap slap a 5lb increase onto that, but this still underestimates his ability and given the current price of 20s (5 places) I think he represents amazing each-way value.