The Grand National favourite did not disappoint on Saturday as Cloth Cap put in a lovely jumping display from the front to win the Premier Chase at Kelso in impressive fashion.

Despite looking like he had to improve at the weights to win, Jonjo O’Neill’s charge jumped from fence to fence and is now rightly the clear favourite for the world’s greatest race on 10 April.

His owner, Trevor Hemmings, has won the National three times previously with Hedgehunter, Many Clouds and Ballabriggs, and on this evidence he could easily be winning a fourth. He loves decent ground, jumps like a buck and stays well. All the prefect ingredients for a Grand National contender.

Betfred betting for the Grand National and all Cheltenham races can be found here.

Also Aintree-bound but over the smaller obstacles looks to be My Drogo. He ran away with the Premier Hurdle at the borders track for Dan and Harry Skelton despite giving weight away to everything else in the field. Connections have been very complimentary, with trainer Dan saying: “Hopefully he's got a big future. He can get a little edgy on a workday but the really impressive thing about him is that as the season's progressed he's got stronger and heavier. We do not weigh our horses, but if we did I would say he is probably a heavier, better horse than he was when he ran in a bumper at Cheltenham in October.”

The fact they have resisted to take him to Cheltenham suggests they are minding him for the long term. Looking at his size and scope, he looks a very exciting horse for fences, and he will be difficult to beat whichever trip he turns up over at Liverpool as a fresh horse. 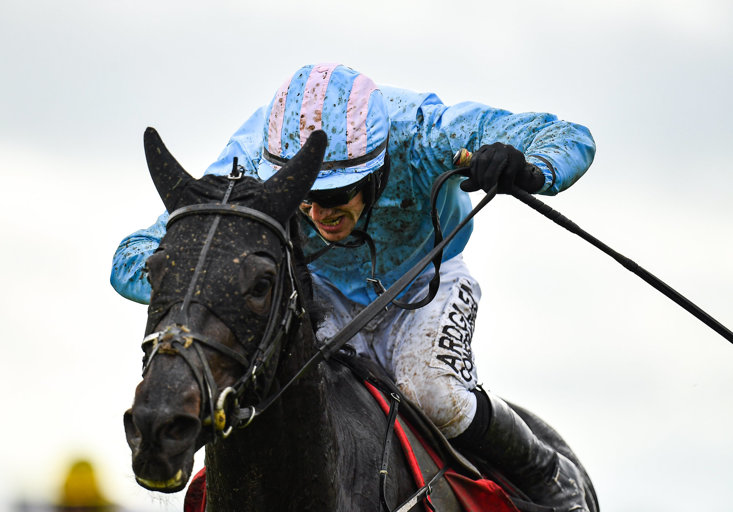 THE SHUNTER HELD ON IN THE MOREBATTLE HURDLE

The big Cheltenham clue arrived in the lucrative Morebattle Hurdle where the sponsors put up a £100k bonus for any horse who won the race and goes on to win any race at the festival. This clearly caught the eye of Irish trainer Emmet Mullins, who had this in mind for his Greatwood Hurdle winner The Shunter.

The eight-year-old still looked well treated on that Cheltenham win and held on bravely on the long home straight to set up a tilt at the six-figure pot. His trainer said afterwards: “Fingers crossed, he'll go to Cheltenham now. There is a huge bonus, and it is great to have a chance at it. I would say we will have to take our chance once the horse is okay. He had a tough race there today and we will give him every chance to get over it and try to find one of the races in Cheltenham for him.”

The Shunter is entered in five handicaps at the festival, two over fences and three over hurdles, and is priced between 7/1 and 9/1 for his various targets. He is sure to be popular with punters wherever he turns up.

Down at Newbury, Hitman scored a bloodless confidence-boosting success when dispatching two rivals comfortably, and is another heading to Liverpool next month. Paul Nicholls has chosen to swerve Cheltenham after he tipped up at Sandown, and he will be among the market leaders for the two-and-a-half mile novices chase at Merseyside early next month.

Umbrigado brought up his hat-trick when landing the feature at Newbury for David Pipe after The Big Bite went wandering on the run-in. He may have been a fortunate winner, but the trainer is seriously looking at letting him take his chance at next week’s festival, where he has two engagements in the Grand Annual and the Plate and is priced at 12/1 for both.

Sandown is traditionally the big meeting of the weekend preceding the festival, with the Imperial Cup the highlight, although this year the course has a new event taken from the festival itself. The 2m 4f Novice handicap chase has made way for the Mares’ Chase at the festival so has found a new home at the Surrey circuit this weekend.

Also, attention turns to the flat as Wolverhampton hosts the Lincoln Trial, a preparation contest for the first big turf flat race of the season at Doncaster on the final Saturday of this month. More on those contests later in the week.