Cricket
News
When England came back from the sporting dead to clinch the Ashes
Matthew Crist
14:00, 15 Aug 2020

In the summer of 1981 a combination of spiralling unemployment and racial tension had led to riots in Brixton, Birmingham, Leeds and Liverpool, the number out of work had risen to 2.5 million, while The Specials’ haunting anthem Ghost Town topped the charts highlighting the sense of sheer desperation across much of the country.

Things weren’t going much better in the cricket either with England, having lost the three-match ODI series against the Aussies, trailing 1-0 after the first Ashes test at Trent Bridge as the pressure grew on captain Ian Botham - if ever a nation needed a sporting lift it was now, but few could have foreseen just what the next few weeks would deliver.

The Australians arrived in England for their ’81 Ashes tour without batsman and captain Greg Chappell, who had decided to take a break from cricket due to family commitments, with Kim Hughes leading the tourists in his absence. And with Terry Alderman taking 4/68 in England’s first innings, and then 5/62 in the second the Aussies convincingly won their first test at Trent Bridge since the ‘Invincibles’ Tour of 1948, there was even talk of a series whitewash.

Although the second Test ended in a draw the result did little to revive England’s spirits, especially those of their beleaguered skipper who endured the ignominy of scoring a pair at Lord’s and as he walked up to the Members Pavilion the silence he was greeted with was deafening. As a result the English selectors decided to replace Botham as skipper and recalled Mike Brearley to the captaincy, a move which proved to be a masterstroke and changed pretty much everything for the remainder of that summer.

Initially, though, it looked like a case of more of the same as, in the Third Test at Headingly, Australia made 401, before ripping through the English batting line-up to dismiss them for just 174; needless to say Australian skipper Kim Hughes had little hesitation in asking the hosts to follow on.

Such was England’s plight that when they found themselves 135/7 in their second innings, bookmakers Ladbrokes were offering odds of 500-1 for them to do the unthinkable and win the match – a price which, as legend would have it, some of the players actually decided to take.

Relieved of his duties as captain, Botham played with the shackles off and took out the frustrations of the first two Tests on the Australian bowlers, making 149 not out and England made 356; leaving the Australians needing 130 to win the match. Bowling like a man possessed England paceman Bob Willis, sensing that his England Test career could be on the line, charged in and made light work of an Australian outfit who needed a pretty modest target to all but seal the series.

Willis took eight wickets for 43 and ensured Australia fell short of their total by just 18 runs, eventually being bowled out for 111; only the second time ever in the history of Test cricket that a side that has followed on end up winning the game. The Australians were so demoralised by the defeat at Headingley that they lost the next Test at Birmingham, with Botham taking an incredible five wickets for 11 runs with the ball in the second innings as England squeaked home by just 29 runs to lead the six-game series 2-1. 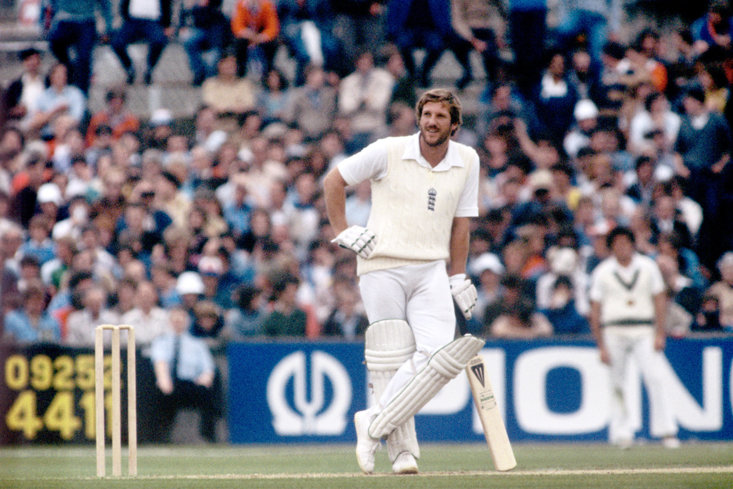 In the fifth Test at Old Trafford Botham overcame the disappointment of a first innings duck to score 118 runs in his second visit to the crease while also taking a further five wickets for 116 runs ably assisted by that man Willis again who chipped-in with seven as England took an unassailable and hugely unpredicted 3-1 series lead.

With the Sixth Test at the Oval ending in a draw England had done the unthinkable and come back from the sporting dead to clinch the Ashes in the most remarkable way imaginable while the country had a new hero to lift the nations’ spirits just when it needed it most. The 1981 Ashes series had witnessed a spectacular resurrection in the career of Botham, and the fortunes of the English team while still inspiring players today ahead of each meeting with the old enemy of Australia.

This article first appeared in The Sportsman on 01/08/19

x
Suggested Searches:
Manchester United
Liverpool
Manchester City
Marcus Rashford
Premier League
More
cricket
Sophia Dunkley Is England's Newest Cricketing Icon That Can...
Sophia Dunkley is a history maker. She became the first black woman to play Test cricket for England’s [ ... ]
cricket
ECB Right To Suspend Ollie Robinson As Cricket Looks To Learn...
Culture Secretary Oliver Dowden joined a number of outspoken critics of the ECB’s suspension of [ ... ]
cricket
New Zealand Bring Desire, England Are Just Dire As First Test...
When New Zealand could have batted for a draw, they went hell for leather on the final day at Lord’s. [ ... ]
cricket
''I Can Still Improve'' Jimmy Anderson Part Of Resurgent Older...
Whisky. Fine wine. Jimmy Anderson. Just three things that get better with age. England’s highest [ ... ]
cricket
World's Best Cricketer Ben Stokes Has Become England's Imperfect...
If there is one thing the British public love more than an underdog story, it is a tale of redemption. [ ... ]
cricket
England Just Fall Short Against India Despite Sam Curran Heroics...
England came up short against India, losing by just seven runs in an absolutely thrilling ODI decider [ ... ]
cricket
England’s Aggressive Batting Pays Off As Bairstow And Stokes...
When England’s top three bat like this, there is simply no side in the world that can stop them. [ ... ]
cricket
Three Years On, Steve Smith Deserves Big Praise For His Response...
On this day three years ago the entire sporting world collapsed on Steve Smith’s shoulders. In [ ... ]
cricket
Root's Calm Head Missed As England Collapse To 66-Run ODI Loss...
India have defeated England by 66 runs in the first one-day international in a game that will once again [ ... ]
cricket
India T20 Win Over England Could Be Perfect Precursor To 2021...
England have lost the T20 series in India 3-2 having been comprehensively beaten in the final match. [ ... ]
cricket
Blistering Buttler Leads England To Bounce-Back T20 Win Over...
England showed their resilient side on Tuesday as they bounced back from Sunday’s defeat in the [ ... ]
cricket
Kohli Takes Centre Stage As England Come Up Short Against India...
England came up short in the second T20I match v India, losing by seven wickets as Virat Kohli proved [ ... ]
cricket
Archer And Roy Star As England Sweep India Aside In Opening...
England began Twenty20 World Cup year in emphatic fashion as they hammered India by eight wickets in [ ... ]
cricket
Weather No Excuse, England Must Learn From Woeful Batting Performance...
How quickly things can change. England’s 227 run win in the First Test v India feels like a lifetime [ ... ]
cricket
Why A Massive Fourth Test Against India Could Define England's...
England’s whole year might well ride on the outcome of Thursday’s Fourth Test against India. [ ... ]
cricket
Brittle England Beaten Inside Two Days As India Survive The...
It was one of the most chaotic days of Test cricket ever but by shortly after tea on day two in Ahmedabad [ ... ]
cricket
Sidebottom Wants To See Both Broad And Anderson Play Third Test...
Former England bowler Ryan Sidebottom says England ought to select both Stuart Broad and Jimmy Anderson [ ... ]
cricket
The Hundred Can Help Revolutionise Women’s Cricket And Inspire...
The long-awaited The Hundred competition is set to revolutionise cricket and will finally kick off this [ ... ]
cricket
Should Test Cricket Lose The Toss After India's Battering Of...
England have nobody to blame but themselves for the manner of their 317-run mauling at the hands of [ ... ]
cricket
Sidebottom Hails ''Fantastic'' Root And ''Stunning'' Anderson...
Ryan Sidebottom has heaped praise on both Jimmy Anderson and captain Joe Root following England’s [ ... ]
cricket
Fantastic Jimmy Anderson Wraps Up A Statement England Win In...
England wrapped up a dominant First Test win over India on Tuesday, with Jimmy Anderson collecting three [ ... ]
cricket
100 Up! Joe Root's Timely Form Could Be The Difference For England...
He is the baby-faced batsman who slotted into England’s line-up in India in 2012-13 and immediately [ ... ]
cricket
Tailenders Is The Easy-Listening Pod That Takes An Alternative...
At the moment, we’re all enamoured with cricket, thanks to India digging in and out-saucing the [ ... ]
cricket
The New Book Shining A Light On The Biggest Scandal In Cricket...
It has been nine years since the News of the World ceased publication. Nine years. Doesn’t time [ ... ]
cricket
Ben Stokes Inspires England Victory In Five-Day Test Classic
This was five-day test match cricket at its finest. Ben Stokes took the final three wickets on Tuesday [ ... ]
cricket
Batting Legend Tendulkar Warns ICC Five-Day Tests ''Should Not...
If you’re looking for a cricket batting record, odds on Sachin Tendulkar probably owns it. The [ ... ]
cricket
England Head To South Africa Test In Search Of Answers And A...
England end a historic 2019 by taking on South Africa in the First Test in Centurion this week. But [ ... ]
cricket
England World Cup Winner Moeen Ali's Conscious Uncoupling From...
“I just want to get that buzz back”. England’s Moeen Ali has continued to put [ ... ]
cricket
England Fail To Win A Test Series In A Calendar Year For First...
England have lost another Test series in 2019, which brings to a close a difficult 12 months that has [ ... ]
cricket
Joe Root Double Century Gives England A Glimmer Of Hope Against...
Joe Root hit a stunning double century to give England a slight hope of victory against New Zealand [ ... ]