This was a semi-final lost in the first three overs of the second innings. A night can change a lot in cricket, India having gone to bed believing they had bowled well.

As the reserve day dawned, it turned out they had – but with nowhere near the ferocity New Zealand were about to unleash.

If hell hath no fury like an underdog scorned, then the Men in Blue were foolish to write off the Kiwis. Perhaps none of us should have been that surprised by their progress to the final either, four years on from their last ‘shock’ appearance.

The fact remains that, on paper at least, New Zealand were the side who the rest of the last four would have picked to face.

Indeed, there have even been allegations that India did just that. They have been accused of cherry-picking the round-robin games in which they performed in order to doctor the semi-final draw. A bold claim it would seem, but one which backfired spectacularly if there is even an element of truth in it.

As the World Cup progressed, India had, of course, moved up to number one in the ODI rankings and that leaves them with even more questions to answer as they head home.

Some feel India’s relationship with Ravindra Jadeja hasn’t been the same since he ran out Hardik Pandya in the ICC Champions Trophy final in 2017.

Aside from that scapegoating, he has also been derided as a ‘bits and pieces’ player. His innings of 77 off 59 was one of the best in recent memory, coming at a time when few of his team-mates had dared go on the attack.

How he would have performed had his talents been used in the league stage will remain one of the great ‘what ifs’ of the competition.

Ravindrasinh jadeja
@imjadeja
Sports has taught me to keep on rising after every fall & never to give up. Can't thank enough each & every fan who has been my source of inspiration. Thank you for all your support. Keep inspiring & I will give my best till my last breath. Love you all 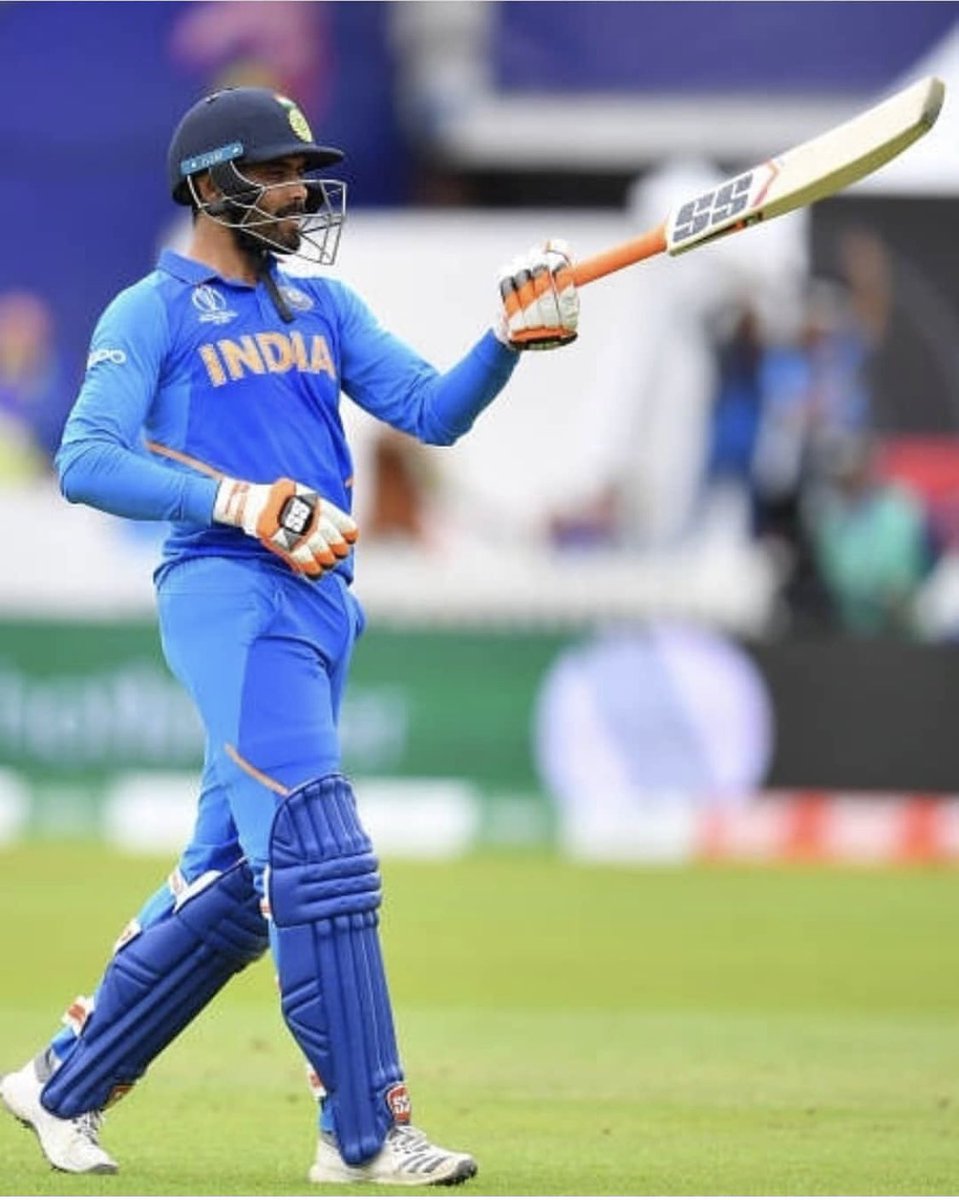 Dhoni needs to lead from the front

It wasn’t until India were 71-5 that MS Dhoni finally took the walk down from the balcony. As it turned out, he was one of the few batsmen to offer much resistance, albeit via a sort of slow death.

Dhoni managed 50 off 72 balls but did aid Jadeja in building up his strike rate to over 130 at the other end. The master-finisher, who throughout nearly two decades has exemplified how to complete the chase, was caught short on this occasion, quite literally as he was run out in a rare but welcome bit of fortune for Martin Guptill.

What India fans are having to weigh up is the Dhoni they remember, and the batsman they have now.

His innings in the England defeat was a reminder that he no longer has the panache or power he once boasted, yet for Ravi Shastri to allow his most experienced player to sit back and watch on as his side crumbled was still a grave error.

What does defeat mean for India going forward?

The likelihood is this shortcoming will be lumped in with their heavy defeat in the 2017 final and the pressure will only increase in 2021 by the time the next Champions Trophy comes around.

By then, they will be without Dhoni and will be all the more reliant on players like Rishabh Pant, who must learn a lesson from the manner of his dismissal on Wednesday, sweeping the ball needlessly to Colin de Grandhomme at deep midwicket after panicking after playing four dots.

In short, losing to New Zealand shouldn’t mean too much. Kane Williamson deserves extra plaudits for his captaincy and Ross Taylor also batted incredibly well on a difficult pitch.

However, that is more simplistic a narrative than tends to follow India wherever they go.

x
Suggested Searches:
Tyson Fury
Manchester United
Marcus Rashford
Lewis Hamilton
F1
Air Jordan
More
cricket
Brittle England Beaten Inside Two Days As India Survive The...
It was one of the most chaotic days of Test cricket ever but by shortly after tea on day two in Ahmedabad [ ... ]
cricket
Sidebottom Wants To See Both Broad And Anderson Play Third Test...
Former England bowler Ryan Sidebottom says England ought to select both Stuart Broad and Jimmy Anderson [ ... ]
cricket
The Hundred Can Help Revolutionise Women’s Cricket And Inspire...
The long-awaited The Hundred competition is set to revolutionise cricket and will finally kick off this [ ... ]
cricket
Should Test Cricket Lose The Toss After India's Battering Of...
England have nobody to blame but themselves for the manner of their 317-run mauling at the hands of [ ... ]
cricket
Sidebottom Hails ''Fantastic'' Root And ''Stunning'' Anderson...
Ryan Sidebottom has heaped praise on both Jimmy Anderson and captain Joe Root following England’s [ ... ]
cricket
Fantastic Jimmy Anderson Wraps Up A Statement England Win In...
England wrapped up a dominant First Test win over India on Tuesday, with Jimmy Anderson collecting three [ ... ]
cricket
100 Up! Joe Root's Timely Form Could Be The Difference For England...
He is the baby-faced batsman who slotted into England’s line-up in India in 2012-13 and immediately [ ... ]
cricket
Tailenders Is The Easy-Listening Pod That Takes An Alternative...
At the moment, we’re all enamoured with cricket, thanks to India digging in and out-saucing the [ ... ]
cricket
The New Book Shining A Light On The Biggest Scandal In Cricket...
It has been nine years since the News of the World ceased publication. Nine years. Doesn’t time [ ... ]
cricket
How Botham And England Revived The Spirits Of A Nation At The...
In the summer of 1981 a combination of spiralling unemployment and racial tension had led to riots in [ ... ]
cricket
Ben Stokes Inspires England Victory In Five-Day Test Classic
This was five-day test match cricket at its finest. Ben Stokes took the final three wickets on Tuesday [ ... ]
cricket
Batting Legend Tendulkar Warns ICC Five-Day Tests ''Should Not...
If you’re looking for a cricket batting record, odds on Sachin Tendulkar probably owns it. The [ ... ]
cricket
England Head To South Africa Test In Search Of Answers And A...
England end a historic 2019 by taking on South Africa in the First Test in Centurion this week. But [ ... ]
cricket
England World Cup Winner Moeen Ali's Conscious Uncoupling From...
“I just want to get that buzz back”. England’s Moeen Ali has continued to put [ ... ]
cricket
England Fail To Win A Test Series In A Calendar Year For First...
England have lost another Test series in 2019, which brings to a close a difficult 12 months that has [ ... ]
cricket
Joe Root Double Century Gives England A Glimmer Of Hope Against...
Joe Root hit a stunning double century to give England a slight hope of victory against New Zealand [ ... ]
cricket
Pope Steps Up After Baffling Selection Leaves England Short...
It is ever difficult to predict exactly what will unfold when England go on tour. Ollie Pope, a man [ ... ]
cricket
Book Review - Ben Stokes: On Fire
Like rugby, cricket fancies itself as a bit of a proving ground for leadership and performance techniques, [ ... ]
cricket
Ben Stokes Throws His Weight Behind ''England's Best'' Joe Root
Ben Stokes has leapt to the defence of under-fire England Test captain Joe Root following the heavy [ ... ]
cricket
The Time Has Come For Joe Root To Step Down As Captain And Focus...
Joe Root loves a soft dismissal these days.  Should England decide to move him aside as captain [ ... ]
cricket
Steve Smith's Welsh Fire To Face Oval Invincibles In First Game...
Steve Smith and Jonny Bairstow will clash with Jason Roy and Sam Curran in the world’s first-ever [ ... ]
cricket
England's 'New Era' Gets Off To Worst Possible Start Against...
England's 'new era' under Chris Silverwood got off to a humiliating start with a huge innings [ ... ]
cricket
Why England's T20 Triumph Over New Zealand Matters More Than...
There could not have been a more fitting antidote to the slightly subdued atmosphere surrounding England’s [ ... ]
cricket
Silverwood Over Kirsten Is The Right Choice For England's New...
England have confirmed the appointment of Chris Silverwood as their new head coach to Trevor Bayliss, [ ... ]
cricket
Why Ashes Win For Australia Could Be A Good Thing In Long Term...
It might well have been a headline from 2019. That famous obituary we all know so well, written [ ... ]
cricket
Five Things That Prove Steve Smith Ain't Perfect
Steve Smith. The best batsman in the world and seemingly impossible to get out from an English point [ ... ]
cricket
Manchester In The Rain: Five Things To Do When The Ashes Is...
Ah, Manchester. The proud home of The Sportsman is known throughout the world for its music, sport and [ ... ]
cricket
Ashes Hero Ben Stokes Must Be Considered Test Cricket's Best...
With every switch-hit, Ben Stokes eclipsed Botham of ’81. In the process, the third Ashes Test [ ... ]
cricket
England’s Lion Heart Jack Leach Is Granted Free Glasses For...
Specsavers have made good on Ben Stokes’ request to grant Jack Leach free glasses for life after [ ... ]
cricket
The Ashes: Why Staging A Test Is Vital To County Hosts
In the run-up to the Ashes, the talk has been about pitches. To be precise, it’s been about poor [ ... ]