ZABEEL CHAMPION has handled Ripon’s undulations with aplomb when landing back-to-back races and was a winner on the July Course last season so the course will hold no fears for Mark Johnston’s chare. He has gone up 7lb for those two wins but I think he can develop into a group horse and the trainer won this race when last run in 2019. Grand Bazaar needs to bounce back from a poor effort at York in October but soft ground could have played a part there and is only 6lb higher than when a ready winner over track and trip in September.

Rodrigo Diaz has climbed the ratings on the all-weather and looks for a four-timer returned to turf off a 24lb higher mark than when his winning run started while Global Storm was well held at Meydan in February and has ground to make up on Zabeel Champion on course from July despite a huge 18lb turn around in the weights.

The Pretty Polly Stakes is an opportunity for fillies to lay a claim on the Oaks next month and John Gosden has won five of the last seven renewals. He saddles Taslima here who was second on her only start at Lingfield a few days before Christmas and is greatly respected with Frankie Dettori on board.

Another pair of once raced fillies head the market in A’Shaari and Sea Karats. A’Shaariwon over seven furlongs on soft ground in August on the July course but is a full sister to Wuheida who handled quick ground when winning at the Breeders’ Cup so conditions should be ok for her.

Sea Karats was gaining all the way to the line when narrowly beaten on her first start at Newbury in a bunch finish but is well bred, cost 500,000 Guineas and is the mount of red-hot Tom Marquand. I expect her to be much wise this time, but it is a step up to Listed company.

I will take a chance each way with the battle-hardened MYSTERY ANGEL for George Boughey and Ben Curtis. She ran nine times as a juvenile last season, including a course victory and was placed in Group 3 company behind the colts over course and distance. She then recorded runners-up efforts at Pontefract, Saint-Cloud and back here at HQ all at listed level. She is tough as teak, stays the trip and should run her race which could be enough for a place at least. 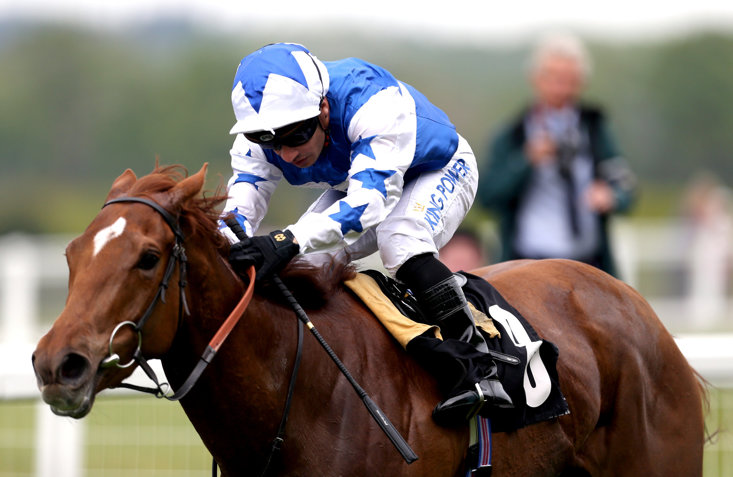 Eight fillies and mares go to post for the Group 2 Dahlia Stakes.

Lavender’s Blue had Fooraat a comfortable one and a half lengths behind at listed level at Kempton four weeks ago and should confirm that form on the same terms back on turf with the well-bred Fooraat disappointing on her sole visit to the track.

Posted had Lavender’s Blue behind at Sandown last year when dictating a listed contest from the front and could not back that up when beaten at Group 3 level here in October but William Buick retains the ride and should not be discounted as the top rated in the race, nor should Lady Bowthorpe who was so impressive at Ascot in July on decent ground and was not disgraced in the Sun Chariot when last seen here at HQ.

The selection goes to QUEEN POWER for Sir Michael Stoute and Silvestre De Sousa. This 5yo has only had nine starts and here is not a poor run amongst them. After winning at the track on debut and transferring to Freemason Lodge she has bumped heads in group company, including placed efforts last year in this race and at Royal Ascot. Firm ground my have caught her out at Salisbury on her final run but the winner of that has gone on to frank the form, including placed at Group 1 level. A reproduction of her comeback run here behind Terebellum last year should be good enough and she did beat the man danger, Lavender’s Blue at listed level as a 3yo.

A dozen fillies do battle for the 1000 Guineas with Santa Barbara the talking horse and subject of volumes of money over the winter and in recent weeks after positive vibes from the Aidan O’Brien camp, looking for his seventh success in the race and a fifth in six years. She has just a single maiden race victory to her name, over a mile and was thought to be an Oaks filly. If she does win this as well as the market suggests, she would be a good thing for Epsom you would imagine, but at short odds this weekend, she must be taken on.

The yard also saddles Mother Earth who ran in all the big juvenile fillies’ races last season, signing off with a second at the Breeders’ Cup in America. She was also third in the Fillies’ Mile and has huge each way claims under Frankie Dettori.

Sacred won the Nell Gwyn over seven furlongs here last month ahead of Saffron Beach after some superb efforts over shorter as a juvenile. She was an early type who looked a sprinter, but that effort give hope she may be able to stretch t a mile, but I am not convinced despite a strong run to win last time over a furlong shorter.

Saffron Beach looks to have the stouter pedigree and will have high hopes of reversing Nell Gwyn form but the key to this could be the Fred Darling at Newbury a fortnight ago.

Statement was just denied by ALCOHOL FREEon that occasion and I think the latter named will be very to keep out of the frame. Her only defeat in four start was a narrow one at the hands of super speedster Happy Romance at Salisbury last year, but she bounced back to win the Group 1 Cheveley Park Stakes next time and knuckled down well in the face of a battle at Newbury to deny Statement, who got first run, by a shirt head. She will build on that return effort and for me sets the form standard on her win here at Group 1 level last September.