The Irish rout on St Patrick’s Day reached its peak as Put The Kettle On showed her ultimate class to defeat fancied favourite Chacun Pour Soi in the Queen Mother Champion Chase for Henry De Bromfield. It was a thrilling finale as the two horses went head-to-head but ultimately it was the only mare in the race who took the ultimate glory with Aidan Coleman on board.

“It was testament to her ability,” Coleman told ITV. “When you are riding a mare like this it is a great buzz. I don't want to take any plaudits, this mare is something else. I don't have to do a lot. She wants it that much. Pulling up, I was really emotional. You can't watch this race and the jumps she put it and not appreciate what they do for us."

It means Willie Mullins has still never won the race, the one missing from his Cheltenham collection, as Chacun Pour Soi raced well but came up short when put under pressure late on. Nube Negra rode hard late on to take second place with Mullins’ favourite finishing third.

It was pure will to win and determination that saw Put The Kettle On home and she had run strongly the whole way around. Put The Kettle On and Rouge Vif led the way early on, with First Flow tucked in behind the pair, but with three to go it was anybody’s race. Sceau Royal ran well under Daryl Jacob and looked to be well positioned on the inside but was badly impeded with just two to go, hitting the inside rail. 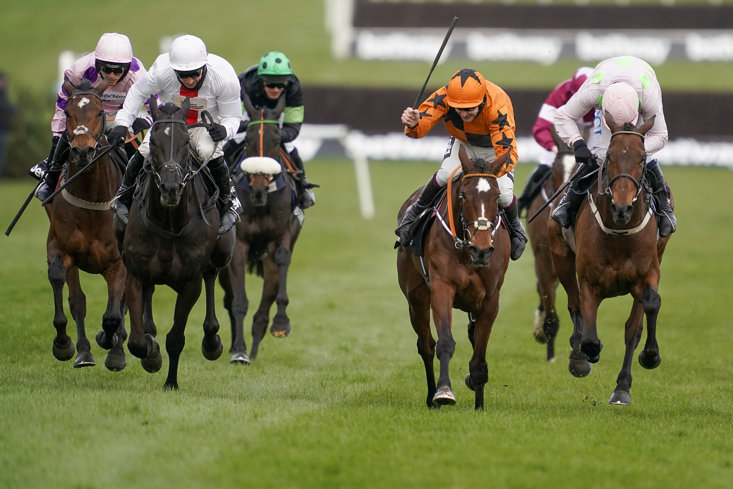 PUT THE KETTLE ON PULLED CLEAR OF THE FIELD LATE ON

At that point it looked like Chacun Pour Soi was perfectly positioned on the inside, but he just failed to get up the hill with the speed we perhaps expected before the off. Once Put The Kettle On had the favourite in her sights she thrived in the final chase, first pulling herself alongside and then going past the Mullins horse as others attempted to chase her down. Nube Negra ran on late to take second, while 50/1 outsider Greanteen impressively finished fourth. It was a case of what might have been for Sceau Royal, who had looked dangerous until impeded, and despite that still recovered to finish fifth.

Politologue last year’s winner, was unfortunately a non-runner due to a burst blood vessel before the race which slightly took the shine off this race as he was set to make his sixth appearance at the Festival. Of course, last year it was Chacun Pour Soi who was withdrawn from the race at the 11th hour, when he could well have won that race if he didn’t have that slight niggle.

It may have been a two-mile race run at great pace, but the final furlong is where it really counts and Henry De Bromfield’s mare thrived in the battle. As always, Put The Kettle On seemed to save her best performances for the Cheltenham Festival and here won an incredible 2021 Queen Mother Champion Chase.