Horse Racing
News
Blackmore can become just the 10th jockey to win consecutive Grand Nationals in Aintree's feature race and the fourth to do so with the same horse
Conor Keane
15:02, 06 Apr 2022

The Grand National delivers glory, shocks, heartbreak, a fast-paced rollercoaster of emotions, but most of all history.

This historic event could see another amazing chapter written this weekend through the already legendary jockey, Rachael Blackmore. We are running out of superlatives for the Irish star who has stolen the show that is jump racing over the last year and she has established herself as one of the greatest jockeys of all time.

Everyone remembers her iconic Cheltenham Festival haul of six winners in 2021, but she was beaten by Jack Kennedy on Minella Indo - the horse she rode to victory in the 2019 Albert Bartlett Novices’ Hurdle, in the Gold Cup after she went too soon at the last.

Her rides at the Festival were captivating and it put in fine form heading into last year’s Grand National where she was partnered with Minella Times, and as if the script was already written before the chequered flag was waved to start the 4 mile, 2 ½ furlong spectacle, she stormed to victory - becoming the first female jockey to win British racing’s most famous race. Minella Times may have been the fourth favourite at 11/1, but with Blackmore at the reins after her superb Cheltenham Festival, punters found it very difficult to bet against her and were aptly rewarded.

A lot has been said about her strong working relationship with trainer Henry De Bromhead, who trained four of her six winners at Cheltenham in 2021, and the pair reunited for success at the Grand National last April.

The dynamic duo were at it again at this year’s Cheltenham Festival with two winners, including the prestigious Gold Cup on the powerful thoroughbred A Plus Tard, who Blackmore had tasted Cheltenham success with in 2019 in the Centenary Novices’ Handicap Chase. It was another fitting reunion and one that put horse and rider in the history books. 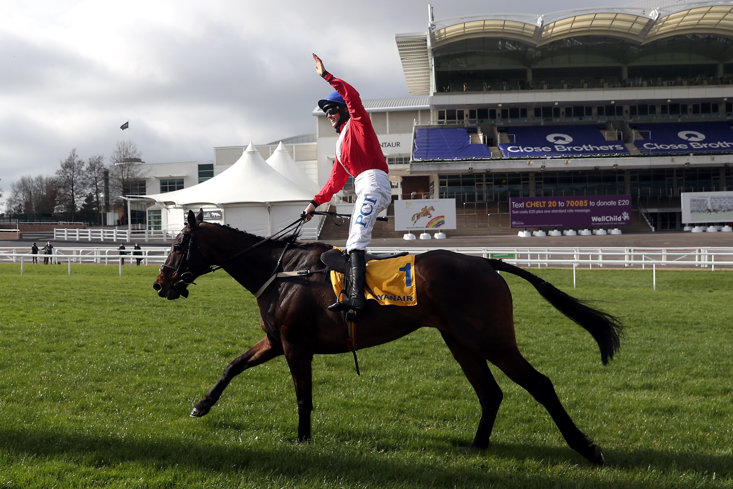 Blackmore learned from her misjudgement against Minella Indo a year prior and timed her final push on the 9-year-old at the perfect time to leave Robbie Power in her wake in the rematch, and A Plus Tard lived up to his name (translation ‘see you later’) as she claimed the astonishing victory by 15 lengths.

It was another historic ride from the 32-year-old who became the first female jockey to win the Gold Cup. This whirlwind 12 months for Blackmore has been extraordinary and she has truly established herself as the Queen of jump racing. Now all eyes will be fixated upon her once again at Aintree as she looks to make more history. She has already become the first female jockey to win this special race and of course the Gold Cup, but she now has the opportunity to become the first female to do so in the same year, and it is fair to assume that most horse-racing lovers are hoping it comes to fruition as Blackmore fever appears to have captivated the nation.

Her successes in the last year will have undoubtedly inspired many young people to want to become winning jockeys, to follow in her footsteps and it won’t have been just girls. She has single-handedly grabbed the attention of the next generation with her heroics in the last 12 months and she is a credit to herself and her sport.

After her Gold Cup triumph she was asked about her status as a role model and she had a humble message for those she will have inspired. She told ITV Racing: “When I took out my license I didn’t think I’d be riding in Cheltenham, let alone a favourite in the Gold Cup.

“I’m so lucky to be getting the chance to ride horses in these kind of races.

“I never even dreamt I could be doing this, and I am.

“What I am doing now is a dream I could never allow myself to have because it wasn’t even in my reality. You can never dream too big because this is something I never thought would be possible.”

Blackmore is proving time and again that dreams can indeed become reality and there is another chance for another dream to be realised at Aintree this weekend. If she were to ride Minella Times to consecutive Grand National victories, she would become the 10th jockey to win back-to-back Grand Nationals, and the fourth to do so on the same horse, while Minella Times would become only the fifth horse to win this spectacular National Hunt race in consecutive years, behind the legendary Tiger Roll, Red Rum, Reynoldstown and The Colonel.

In Aintree’s build-up to the big weekend, the racecourse posted a video titled, ‘A letter to my daughter, Rachael Blackmore’ from her mother Eimir, which was a lovely tribute. In the video, she spoke about her daughter’s journey to this point in her career.

She started by saying: “From the moment Rachael was born, we knew it was going to be an adventure.

“She couldn’t wait to get going… Horses were always a big part of Rachael’s life.

“It wasn’t long before she was riding herself.”

Her mother went on to detail her increased love for riding and how although success wasn’t forthcoming, she never gave up in her pursuit for success which filtered in to her successes at the Cheltenham Festival and Grand National in recent years, labelling 2021 as an “unforgettable year”, before saying she had to “pinch herself” after Blackmore’s Gold Cup win less than a month ago.

She added: “Despite the successes, Rachael remains true to herself. It’s no good having success if you aren’t a decent human being. All she ever wanted was to ride horses and if she inspires others, that’s a major bonus.

“It can be a tough job at times, but Rachael must be made of strong stuff. In her words, ‘you can win one minute and be on the ground in the next.’ But win or lose, we’re delighted and grateful for all that she has achieved so far, and excited for all that is yet to come.”