The penultimate day at Royal Ascot provides more opportunities for winners although they will not be easy to come by with big fields the general order of the day.

A really tricky looking Albany and the market should provide lots of clues about these lightly raced promising fillies. It has paid to be drawn high in this race previously although Sandrine won from stall 2 last year.

Aidan O’Brien saddles the hat-trick seeking likely favourite Meditate, while Mawj was a wide margin winner at Newmarket five weeks ago, beating Believing who has won since when blowing the start to the tune of ten lengths at Wolves.

Tentative vote goes to Queen Olly for Amo Racing, David Loughnane and Rossa Ryan who looked very professional on her debut at York, quickening up to win by over three lengths. The form has amounted to much, but she did win stylishly.

The Commonwealth Cup has been a fantastic addition to the programme and this year's renewal looks superb.

Perfect Power didn’t see out the mile in the Guineas as was predicted by many, but he could be potent as a sprinter judging by his Middle Park success as a juvenile in September.

El Caballo proved he’s just as good on turf as all-weather when winning the Sandy Lane, the main trial for this contest at Haydock, ahead of Flaming Rib, Wings Of War and Go Bears Go.

I do like the claims of Go Bears Go, who can be forgiven that run having missed the break and doing a lot of work to get into contention, threatening in the last furlong but his run petered out. he has a good record here and is a huge player.

Preference though is for EHRAZ. He was behind Go Bears Go here in April but was as big as a boat then and Jim Crowley was a little too confident when failing in a photo to get up at Newbury last month, just edged out by Tiber Flow. He won his maiden at Ascot twelve months ago, is the most lightly raced of the market leaders and gets the vote in a fascinating contest. 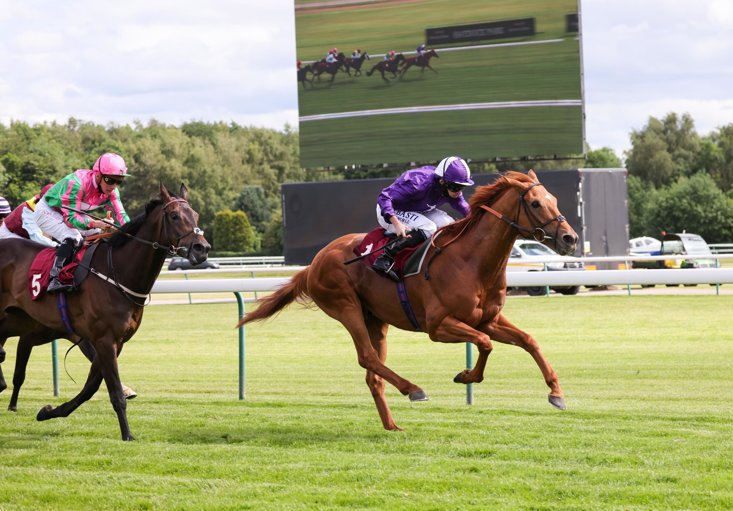 Another chance for a royal winner here in the Duke Of Edinburgh Stakes courtesy of Her Majesty The Queen’s Just Fine, in a race that would mean much to her to win.

This has clearly been the target for Just Fine. Trained by Sir Michael Stoute, who has won four of the last eleven runnings, the 4yo caught the eye when hampered at York on his return five weeks ago and acts well on quick ground. he has leading claims, as do last time out winners Trawlerman and Candleford, while hat-trick seeking Connect has more on his plate up 6lb for his Haydock success.

I am keeping the faith with SIR RUMI. His form on good to firm ground reads 4114, with the latest effort just finding the 1m 6f trip too far at Newmarket. He is 1lb lower than last year’s good sixth here over 1m 2f on soft ground and looks overpriced for each-way bets considering his consistency.

The Coronation Stakes lacks a little star quality with the withdrawal of Homeless Songs on account of the ground, but we still have the 1-2 from the English and French 1000 Guineas plus last year’s champion 2yo filly.

There are questions to be answered by most of the field. We haven’t seen the unbeaten Inspiral since October, having met with a setback in her Guineas prep and it sounds like things haven’t been plain sailing with her. If she is on song, she goes very close, but being asked to take around 2/1 doesn’t tempt me in.

It will be hard for 1000 Guineas winner Cachet to make it all here over the stiff mile from stall 9, while her French guineas conquer, Mangoustine, has done all her winning on softer ground.

Prosperous Voyage is ultra-consistent but keeps finding one too good while Tenebrism needs to prove herself over the trip after a poor effort as favourite at Newmarket.

Spendrella is a fascinating contender from America. She is three from three and will love hearing her hooves rattle. But the form is hard to equate with her latest effort not working out well at all.

The pick is DISCOVERIES for Jessica Harrington to follow up her 2018 and 2020 wins in this race. Those wins came courtesy of DISCOVERIES’ full sister Alpha Centauri and half sister Alpine Star. She weakened late at Newmarket but may have just lacked for fitness on her first start of the season and was a Group 1 winning two-year-old. There is hope she will relish the fast ground if following in his illustrious siblings' hoofprints and if she does, can join them on this roll of honour.

The Sandringham Stakes is another tricky punter’s puzzle to solve with thirty 3yo fillies over the straight mile with any amount of improvement amongst them.

Charlie Fellowes and Hayley Turner teamed up to win this with 33/1 shots in 2019 and 2020 but they have a shorter-priced hope in 2022 with recent Doncaster winner Fresh Hope. That win came on quick ground and being dropped to this mile trip on handicap debut and a 4lb rise is far from excessive.

Usually, that would be enough to perhaps give her the vote and I am not one for favourites in these types of races, but there really could be a bona fide group horse in here masquerading as a handicapper in the shape of HERDIA.

Richard Hannon’s filly had been mooted as a Guineas type but they ran out of time to get a run into her and decided to take advantage of her mark up at York four weeks ago. Sean Levey had a rocky ride behind horses, repeatedly denied a run but the turn of foot she showed when in the clear is not seen too often, cutting through the pack and making up the five lengths inside the final furlong to win by a short head from Espresoo.

Normally I may give Espresoo grounds for turning the form around, especially as she is four times the price, but that was HEREDIA’s seasonal debut. She will come on plenty for just her third start, the 7lb rise is far from excessive judging by the route she took and the step up to a mile promises to bring about more improvement. She also won on her debut on good to firm ground and I expect we may see her in top company at the end of the season.

The King Edward VII Stakes, or the Royal Ascot Derby as it is affectionately known, welcomes a field of just six to the start.

Changingoftheguard comes here after finishing fifth in the Derby at Epsom just thirteen days ago and he had a hard race there, trying to make all the running, eventually weakening and beaten by almost ten lengths. Previously he had made his stamina count to beat a Godolphin hotpot at Chester, but I fancy the boys in blue to gain revenge courtesy of Newmarket listed winner OTTOMAN FLEET.

He needed every yard to win at HQ and the favourite that day had the favoured stands rail, so the win can be marked up a little. Savvy Victory was back in third but I can’t see him getting any closer. Ottoman Fleet is the least experienced here, having just his third start but the extra two furlongs will suit, being by a Derby winner and the dam also sired by a Derby hero.

William Haggas won this last year with Alenquer and is represented by Lysander, but he is held by the selection on a line through Lionel who beat him at Goodwood but was behind OTTOMAN FLEET at Newbury.

Another very competitive contest concludes Friday's action courtesy of the Palace Of Holyroodhouse Stakes over the flying five furlongs.

Korker is a speedball who was never going to get beaten at York last time, but a 9lb rise is excessive as it wasn’t a strong contest.

Wesley Ward saddles Ruthin whose only defeat came at last year's Royal meeting when sent off favourite for the Windsor Castle, but he’ll like this quick ground.

Ladies Church drops into handicap company having acquitted herself well in pattern contests in Ireland while Nymphadora is of interest off this mark with Harry Davies taking off 5lb. She won the Marygate at York last year and was staying on well at Chester last time, but quick ground is a concern.

The tentative vote goes to LOVES ME LIKEAROCK. A fast run of stiff five furlongs should play to her strengths. She travelled the best at Newmarket two runs ago but just lost the battle in the final yards, while the form of her recent fourth was franked when the horse she finished two lengths behind bolted up in a competitive sprint at York on Saturday. The ground asks a question, but she could be well treated under these conditions and the yard has been in good form already this week.