Darts
News
Snakebite was critical of his own display despite a big win
Simon Lillicrap
22:58, 18 Jul 2021

Sunday’s evening session at the Betfred World Matchplay provided us with some more top tier sport from Blackpool as Peter Wright dismantled Danny Noppert and the talented Jose de Sousa had a huge win over Gabriel Clemens. With Covid-19 restrictions lifted at midnight, we have a full house to look forward to on Monday at Winter Gardens, but here is how Sunday night unfolded.

The celebration of the night came from a visibly relieved Joe Cullen, who bucked a poor run of form to edge past Chris Dobey, who was beaten by the better man on the night. Cullen pulled off an average of 98, as well as five 180s as he ended a run of five straight defeats at the world matchplay.

After a slow start Dobey broke to lead 5-4, but it was Cullen who came on strong in the second half of the match. After landing a double 8 to end this losing run, he let out a huge roar to the Blackpool crowd and a few understandable tears followed.

He’ll face Wright in the next round, and has already stoked the fire between their meeting in the post-match press conference as he said: Peter Wright says things like that all the time. ‘He's gonna win this and he's gonna win that’, the amount of times he’s said it and got egg on his face and he goes out in the first game.” Should be a cracker.

The 2019 finalist Michael Smith hit 10 out of 19 doubles to take himself into the second round with relative ease, although that is perhaps undermining the good work Ryan Searle did early on. 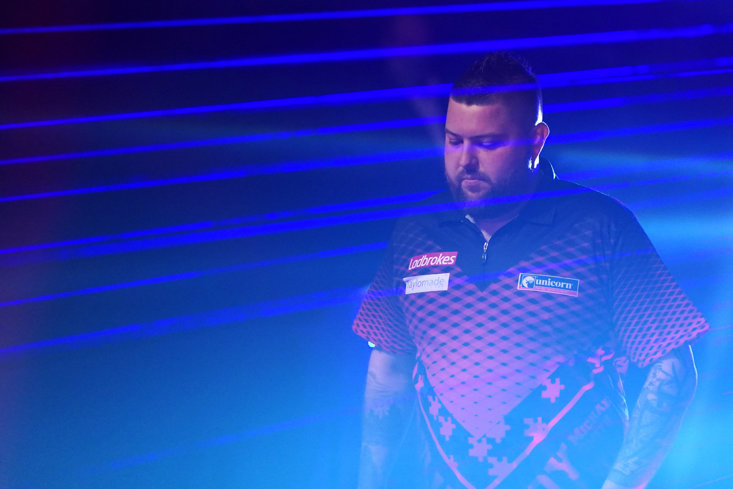 The 33-year-old checked out with a double 20 to level the match at 3-3 but from that point, Smith took the game away from him, winning the next four legs, including one with a 136 checkout. The rest was a formality as Smith never looked out of control once he had the lead, as he sails into round two, even if he feels he can improve.

“Tonight my doubles went in for once,” he said. “I'm happy I grinded it out, bit disappointed with my scoring but a win's a win."

"To be honest Danny let me off, he missed a lot of doubles, I thought I played absolutely rubbish.”

Those were the words of 'Snakebite’ Wright after his dominant display and in truth, as he slammed his own performance despite an easy win.

“The setup I was using before wasn't that one. It's a win, I'm through to the next round. I feel so confident. I'm not being a big mouth but if I feel confident everybody else has got to worry and they've got to play their best to beat me."

A double 19 sealed the win for the 2020 world champion in simple fashion but it seems his expectations of himself are a lot higher this summer. The talkative Cullen awaits in what could be the most vocal meeting of the tournament.

The Special One made light work of his first-round tie and proved to all other competitors that he could well be the one to beat in Blackpool. He raced into a 5-0 lead against Clemens, who couldn’t land a glove on him as the Portuguese landed double after double.

The German was utterly outclassed but would win a couple of legs in the second period, including one against the throw, but the De Sousa was never likely to be chased down and completed a comfortable 10-2 victory with a double five after Clemens gave him one chance too many. De Sousa is here to win, that is for sure, and if he keeps performing at this level it will take something special to stop him.