A fantastic weekend of racing highlighted by the big field betting race that is the Ladbrokes Trophy at Newbury and the first big two-mile hurdle clash of the season with the Fighting Fifth at Newcastle. Fingers crossed the weather doesn’t wreak havoc and spoil the fun.

Below are a few from the TV races that take my eye but a note of caution to not be caught out. ITV will switch their action to the main channel from ITV3 ahead of the big race at 3pm.

Lots of eyes will be on Nicky Henderson’s Lecale’s Article as he looked a top prospect when winning here last December but was well below expectations in two starts subsequently and makes his handicap debut here.

A key piece of form though comes from Kempton three weeks ago where Calva D’Auge beat ANNSAM by just over two lengths. With adjusted weights and different claims from jockeys, ANNSAM is now 10lb better off and should settle better in a bigger field with a stronger pace. Evan Williams and his daughter Isobel teamed up for a big Saturday winner at Haydock seven days ago and at around 12/1, he looks too big, each way, especially with Calva D’Auge half of that price.

The Rehearsal Chase looks set to be a true test with confirmed pacesetters Glen Forsa and Dingo Dollar in the line-up. Glen Forsa has been dropped a pound for an eye-catching Ascot return, but with the forecast wind around the country tomorrow, front runners may find it tough to make all. Stamina could come into play, and plenty of these have it. Sam’s Adventure won an Eider but would prefer softer ground while Notachance has something to prove after failing to complete the last twice but did win a Warwick Classic Chase. 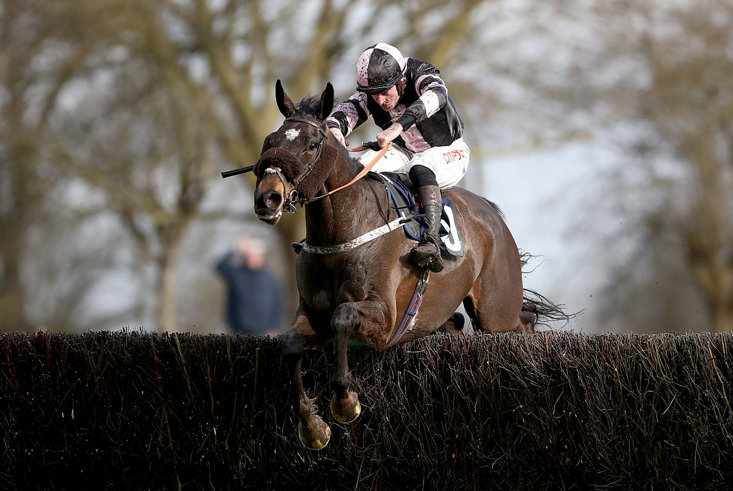 THE FERRY MASTER travelled like the winner for a long way on his comeback over nearly four miles at Musselburgh but got tired under his big weight in the final quarter mile. With that run under his belt and very low weight here of just 10-0, last year’s Scottish National fourth can get back to winning ways. Ryan Mania cannot do the weight, hence why he rides stablemate Dingo Dollar, so Craig Nichol gets aboard.

With very generous each way terms on offer, I fancy a couple of darts in the Ladbrokes Trophy.

First up is EKLAT DE RIRE, who I am still convinced is a high-class chaser in the making and has been campaigned like one. His only defeat over fences was when unseating at the top of the hill in the Brown Advisory (RSA) at the festival behind Monkfish. He beat two useful yardsticks on chasing debut before landing a Grade 3 at Nass, ahead of a pair of graded quality horses in Pencilfulloflead and Escaria Ten, who himself was placed third in the National Hunt Chase at Cheltenham.

He made his seasonal reappearance at Wexford in a race previously won by Gold Cup hero Minella Indo and we saw what Henry De Bromhead’s staying chasers can do with A Plus Tard’s Haydock romp seven days ago. Granted, he has 11-8 to carry here and only Denman and Trablogan have carried more weight to victory this century. Even Bob’s Worth and Many Clouds only had 11-6 in their winning years, but it is just the fifth start over fences for EKLAT DE RIRE and I expect we will be seeing him in Grade 1 company again in the spring festivals.

Elsewhere, Demachine and Remastered are closely matched on their Reynoldstown Chase form from February at Ascot, with the former receiving a 4lb pull for a four-length defeat, while Ontheropes makes it a strong Irish challenge after his easy win in the Munster National, for which the British handicapper hit him with a 12lb rise.

Fiddlerontheroof won well at Carlisle and was second to Monkfish at Cheltenham when the yard wasn’t firing. He too is a major player while last year’s victor, Cloth Cap bids to join immortal greats such as Denman, Arkle and Mandarin as a dual winner. The fact it’s a small but select list shows how difficult his task is off an 18lb higher perch.

For those looking at one at a tasty price, Cloudy Glen, in the same colours as Cloth Cap of the late Trevor Hemmings, could do well for Venetia Williams. He was second in the Kim Muir at the festival, has had a wind operation over the summer and has won two of his three seasonal debuts.

But the other selection goes to POTTERMAN. The race had yet to really begin when he unseated Tom Cannon in this race last year as they set out on the final circuit. He comes in here off an identical preparation after finishing second at Wincanton and his 6lb higher mark is justified after winning the old Whitbread Gold Cup at Sandown in April. That was a somewhat fortunate success achieved in the steward’s room when Enrilo was first past the post but badly hampered the unfortunate Kitty’s Light. He is better off at the weights with both of those reopposing rivals and will still be galloping when plenty have cried enough.

Maybe this is the romanticist in me, but I would love to see SCEAU ROYAL win this afternoon, and I’ll be backing him to do so.

Ok, so on last year's run in this contest, in which bizarrely is almost a re-run with five of the six declared going to post again, he has three lengths to find with Epatante, who was making her seasonal debut with Sceau Royal already match fit from two previous runs. It is a carbon copy this time around too with the mare once again receiving 7lbs. However, last year's race was messy once Not So Sleepy departed early and carried out Silver Streak, leaving Sceau Royal out in front.

Without any dramas this year, he will have a pace to aim at and was only undone in the final half furlong last year. We know the way the race plays out will also play to Epatante’s strengths, but official figures have her 5lb lower this year after events not going to plan post Fighting Fifth, while Sceau Royal, despite being on the same mark, seems in rude health once again (already beaten Silver Streak at Kempton), if not better than ever.

Monmiral is an obvious danger with his form looking stronger by the week. He is in the big boy leagues though now, has a few pounds to find on the figures (which can easily be done considering how lightly raced he is) but connections would have preferred to go to Newbury until realising he wasn’t qualified for that race.

FRERO BANBOU ran a strange race at Ascot a month ago. Having been well backed into favouritism, he was prominent early before totally losing his position going away from the stands. He looked like getting back into contention on the run from Swinley bottom but his run then petered out when turning for home and was a well beaten fourth. But there are signs that better can be expected here. That was his seasonal debut, and he certainly showed ability to try to get back competitive, while the Venetia Williams yard is in much better form now too. He has been dropped 2lb and the fact he was supported suggests much better was expected. The winner, Amoola Gold, went very close off a career high mark last week too.

He has a few lengths to find on Grey Diamond on that effort, but Sam Thomas’ horses have been going well on their seasonal debut’s and he doesn’t make much appeal at around 5/1 second time out.

Paul Nicholls’ 4yo, Il Ridito, gets a big 8lb weight for age allowance and any strong market support for him should be heeded.

*All odds supplied by Betfred | 18+ | BeGambleAware