Cricket
News
The tourists won the First Test on the back of the pair's brilliance
Simon Lillicrap
15:00, 09 Feb 2021

Ryan Sidebottom has heaped praise on both Jimmy Anderson and captain Joe Root following England’s surprise 227-run win over India in the First Test in Chennai. Anderson bowled a magnificent over to dismiss both Shubman Gill and Ajinkya Rahane on the final day to ensure that Root’s first innings knock of 218 came in a winning cause.

And the former Yorkshire and England seamer has hailed the skipper’s coolness in delivering on a milestone occasion, telling The Sportsman: “The pressure that surrounded Joe Root and the 100th Test match, everyone patting him on the back and saying well done, to put that to one side and go out there and perform how he did, he was just imperious; it was beautiful to watch wasn’t it?

“He built his innings and the team, all in all, were hugely confident after Sri Lanka. It was an awesome five days of Test cricket. I think to win Test matches, it is not just about scoreboard pressure, it is about the quartet, the seam bowlers as a unit, performing together and they have done that brilliantly.

“Joe Root’s captaincy was fantastic, he operated the seamers from one end and the spinners from the other. His field placing, I think in terms of captaincy he is growing with his influence on the team.” 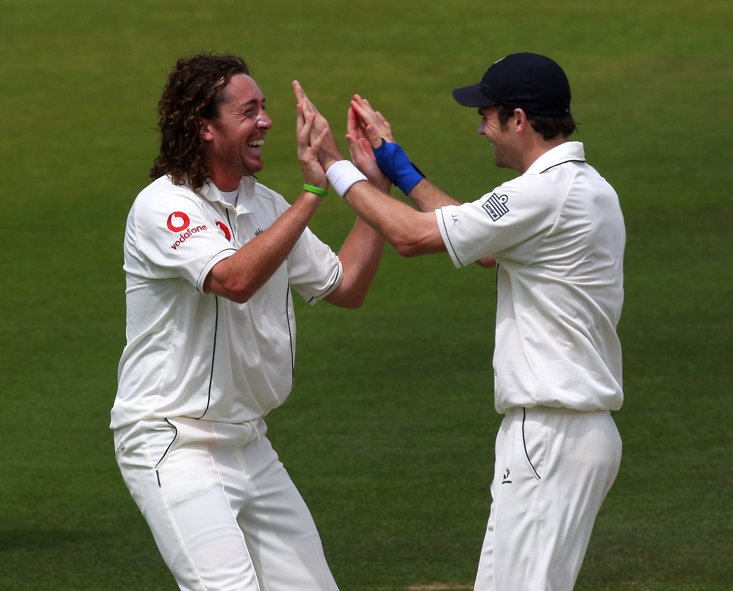 If Root was the main course, Anderson was the sumptuous dessert as he took three wickets for just 17 runs in the second innings, with two coming in his almost perfect over, while Jack Leach ended with 4-76.

Gill and Virat Kohli were just beginning to put the pressure on England in the middle when Anderson took centre stage. The 38-year-old dismissed Gill with his second ball, leaving the stumps flying through the air, while his fourth ball followed the same trajectory as Rahane survived an LBW appeal when he really shouldn’t have. His fifth ball left no room for doubt as Rahane’s stumps suffered the same fate as Gill’s had just minutes before. And Sidebottom was left as thrilled as the rest of us after watching those six deliveries.

“The old GOAT Jimmy Anderson was stunning wasn’t he? All that reverse swing, there is still life in the old dog yet!”

With the next Test taking place on Saturday in the same stadium, Sidebottom thinks England will fancy their chances of taking a 2-0 lead in the series.

“It is a quick turnaround, all the batsmen are looking in decent form now, they’ve had time in the middle, the spinners again are still inexperienced but they've bowled brilliantly in Sri Lanka and in the first Test. I think [the quick turnaround] will help England.

“The only thing that will change is maybe the wicket, will India change the wicket and play seamers and leave a little bit more grass on? Or will they go for a bigger turner from ball one? We will have to wait and see but India need a response because England looked comfortable, they really did. They'll want to get out there and get playing again.”

The Sportsman
@TheSportsman
🗣️ "It was absolutely stunning."
@RyanSidebottom praises @jimmy9 and the @englandcricket team after a fantastic first Test win over India...
1
9

Having predicted a 3-1 series win for India before a ball was bowled, the man with 79 Test wickets to his name now wants to change his mind after that incredible opening performance from England.

“For all the pundits out there, don't listen to me!” he laughs. “India are so strong at home, that was my head saying ‘they are so confident, they've not lost many Test matches in many years on home soil, England are notoriously very slow starters.’

“England are growing in confidence, and I’d like to change my 3-1 India prediction to 3-1 England! We will see, England still need to play well, they can’t rest on their laurels, but they are in a great position having got off to a fine start.”

x
Suggested Searches:
The Sportsman
Manchester United
Liverpool
Manchester City
Premier League
More
cricket
WATCH: Henry Nicholls' Bizarre Dismissal Against England
We have just witnessed one of the most incredible things ever seen in a Test cricket match! During [ ... ]
cricket
Is It Time For England To Separate Their Test Side From ODIs...
Joe Root was England’s top scorer at the last Cricket World Cup. Jonny Bairstow leathered back-to-back [ ... ]
cricket
Duck, Duck, Excuse: Captain Morgan's On Shaky Legs As England...
We have seen two sensational ODI performances from England in the Netherlands. After hitting a world [ ... ]
cricket
England Smash ODI World Record As Jos Buttler Hits 162 in 70...
England have just done something truly spectacular. Against the Netherlands, Eoin Morgan’s side [ ... ]
cricket
Brilliant Jonny Bairstow Batters New Zealand As England Take...
Jonny Bairstow smashed England’s second fastest ever Test century as Ben Stokes’ side wrapped [ ... ]
cricket
Unstoppable Jimmy Anderson Brings Up 650 Wickets With Plenty...
When a young James Anderson conceded a no-ball as his first act as a Test bowler and went on to concede [ ... ]
cricket
Why Ben Stokes' And Joe Root's Differing Personalities Suit...
As England prepare to take on New Zealand, looking to win back-to-back Tests on home soil for the first [ ... ]
cricket
Joe Root: England's Greatest Ever Batter Now Has The World's...
If there was ever any doubt about Joe Root’s class, it is simply beyond debate after his match-winning [ ... ]
cricket
Majestic Joe Root Leads England Into A New Era With New Zealand...
The new era of English cricket started with a bang as Joe Root’s masterclass hundred led England [ ... ]
cricket
The English Cricketing Summer Won't Be The Same Without Shane...
There’s a piece of the English summer missing. New Zealand wickets fell at regular intervals on [ ... ]
cricket
New Era, New Hope? England Cricket Seeking A Fresh Start After...
A new Test summer brings a new captain, new coach, new managing director and new approach to English [ ... ]
cricket
Brendon McCullum Not Afraid Of England Challenges With Ben Stokes...
Brendon McCullum strolled around Lord’s, soaking up the ‘Home of Cricket’ as [ ... ]
cricket
Stokes The Skipper: However Long It Lasts, It Should Be One...
He dragged England from the brink in the 2019 World Cup final to help record the most dramatic victory [ ... ]
cricket
Joe Root's Resignation Leaves England's Men's Test Team At An...
Now what do England do? They have failed to win any of their last nine Men’s Tests, have one victory [ ... ]
cricket
Everything You Need To Know About The Hundred 2022
The Hundred is back for its second edition and with the draft having taken place earlier this week, [ ... ]
cricket
Why The Hundred Deserves The Main Billing Ahead Of Suffering...
While England’s women flew the flag proudly for the nation during the recent World Cup, England’s [ ... ]
cricket
England Suffer Final Heartbreak As Australia Win Women's World...
England suffered heartbreak on the grandest stage as history makers Australia blasted their way to a [ ... ]
cricket
Can Underdogs England Secure Most Unlikely World Cup Win vs...
England have risen like a phoenix from The Ashes and are out for redemption in the Women’s World [ ... ]
cricket
Can Heather Knight's England Complete Staggering Turnaround...
Resurgent England have produced a remarkable turnaround to keep their Women’s World Cup title [ ... ]
cricket
Root Of The Problem: Do England Need A Change Of Captain?
It’s true: England have become the laughing stock of world cricket. So, has the time come for [ ... ]
cricket
West Indies vs England Preview: Lifeless Pitches Will Kill Test...
Sir Geoffrey Boycott had it right when he said “The future of Test cricket is at stake — [ ... ]
cricket
England Once Again Fail To Find Knockout Blow In Hard-Fought...
England captain Joe Root stressed he saw plenty of “progression” from his side after a gruelling [ ... ]
cricket
Shoots Of Recovery: England Batsmen Finally Re-Pay Under Fire...
England endured an Ashes series to forget. Hammered by arch-rivals Australia, skipper Joe Root just [ ... ]
cricket
Strauss And Collingwood Era Begins As England Aim To Restore...
England’s new-look Lions begin their three-match tour of the West Indies on Tuesday desperate [ ... ]
cricket
Australian Cricket Legend Shane Warne Dies At 52
Australian cricket legend Shane Warne has died at the age of 52 after a suspected heart attack. Warne, the [ ... ]
cricket
Australia, New Zealand Or England: Who Will Win The Women's...
We’re back in New Zealand for a women’s Cricket World Cup, 22 years after the last tournament [ ... ]
cricket
England's Women Can Redeem Winter Of Discontent With World Cup...
England head to this year’s ICC Women’s World Cup in New Zealand hungry to win their [ ... ]
cricket
England Cricket In Chaos: More Questions Than Answers, But What's...
England have become the laughing stock of world cricket this winter.  It was a shocking showing [ ... ]
cricket
England's Women Round Off Dismal Ashes Winter With Another Heavy...
England’s miserable Ashes came crashing to a horrible end as they were resoundingly thrashed by [ ... ]
cricket
Women’s Ashes: Australia Seal Series Win After Dismal England...
An England cricket team collapsing in a heap in Australia, it’s the recurring nightmare for English [ ... ]