England have confirmed the appointment of Chris Silverwood as their new head coach to Trevor Bayliss, who left at the end of the Ashes.

In one sense, the World Cup winner’s shoes will be difficult to fill. In the Test format, however, he took over an England side placed fourth in the rankings, and left with them in exactly the same position, more than a few calamities later.

His successor has been dealt a difficult hand when he comes to select his first XI, though England are already looking to youngsters like Kent’s Zak Crawley, who has just received his first call-up.

The 44-year-old Silverwood has been promoted from the role of bowling coach, meaning he already has an intimate knowledge of the players.

Ever since he masterminded Essex’s County Championship triumph in 2017 – including the nurturing of star bowler Jamie Porter, who was Division One’s leading wicket-taker in that campaign – he has been on the radar.

Even back then, Essex expected him to be plucked from them by the national side and he was duly brought into Bayliss’ set-up.

In some ways, his demeanour is similar to that of Bayliss, known for his calm approach and steady leadership.

What differentiates him from his predecessor is his expertise in the County Championship, which so often seemed an alien field to the Australian.

PCA
@PCA
🏴󠁧󠁢󠁥󠁮󠁧󠁿 Congratulations to Chris Silverwood for his appointment as England Men's Head Coach.
Silverwood has been promoted from his position as Bowling Coach to take over from Trevor Bayliss. 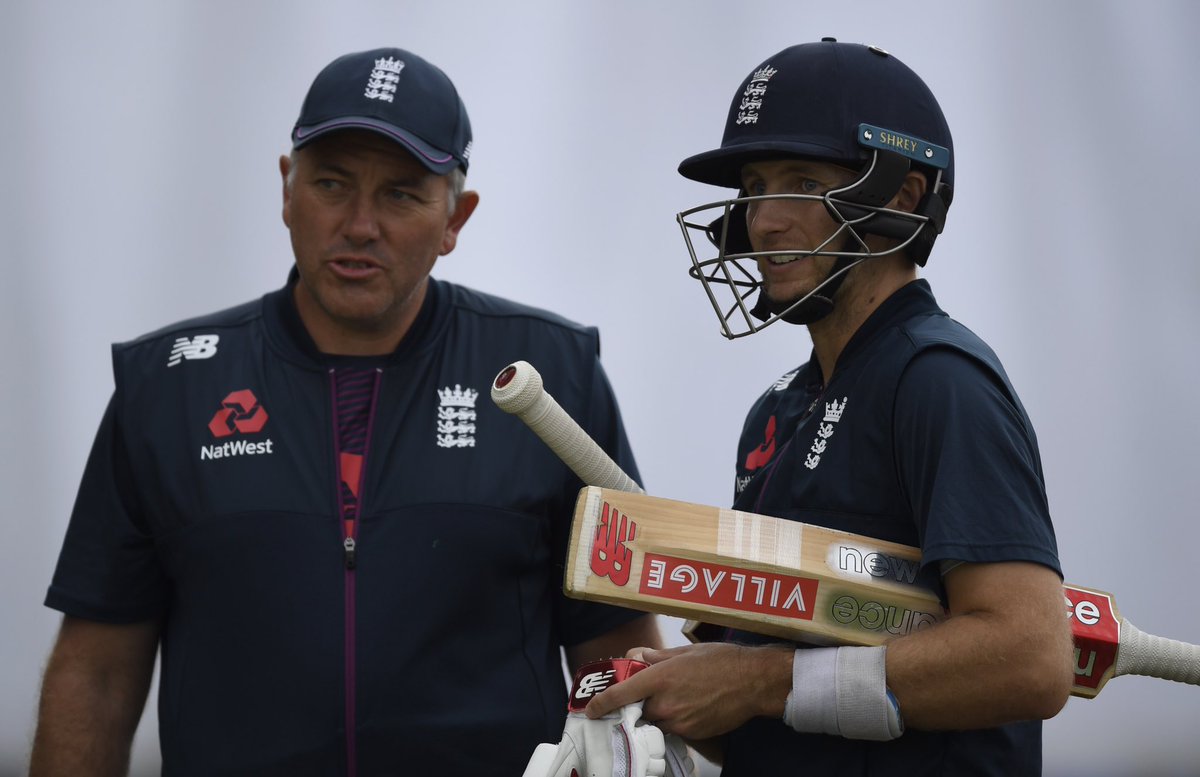 A man who has spent so long focusing on the longer formats may well be the key to improving England’s faltering Test form.

Joe Root’s men have been all out for double figures twice this summer, firstly against Ireland and then in the third Ashes Test. Bizarrely, they went on to win the match on both occasions.

Last week, it appeared England had set their heart on former India and South Africa coach Gary Kirsten - the former batsman has five years of experience coaching at an international level.

Silverwood was also a less notable player, featuring in just six Tests and seven ODIs for his country.

One of the biggest issues was that Giles was keen to appoint a single coach for all three formats of the game. Kirsten had expressed reservations about spending so much time away from his family, who are based in his native South Africa.

The ECB initially thought they could work around those issues and were even willing to give him an unprecedented amount of time off.

That was until Silverwood came in with a clear plan of how to improve England in both red and white ball cricket. The priority will be winning back the Ashes in the next series Down Under.

There is little time for Silverwood to bed himself in as he looks ahead to winter tours of New Zealand and South Africa. The five-match T20i series against the Black Caps starts on November 1 in Christchurch, before the two Tests beginning on November 21 at the Bay Oval, Mount Maunganui.

England have made a bold but strong selection as they begin a new era.

x
Suggested Searches:
Tyson Fury
Manchester United
Marcus Rashford
Lewis Hamilton
F1
Air Jordan
More
cricket
Weather No Excuse, England Must Learn From Woeful Batting Performance...
How quickly things can change. England’s 227 run win in the First Test v India feels like a lifetime [ ... ]
cricket
Why A Massive Fourth Test Against India Could Define England's...
England’s whole year might well ride on the outcome of Thursday’s Fourth Test against India. [ ... ]
cricket
Brittle England Beaten Inside Two Days As India Survive The...
It was one of the most chaotic days of Test cricket ever but by shortly after tea on day two in Ahmedabad [ ... ]
cricket
Sidebottom Wants To See Both Broad And Anderson Play Third Test...
Former England bowler Ryan Sidebottom says England ought to select both Stuart Broad and Jimmy Anderson [ ... ]
cricket
The Hundred Can Help Revolutionise Women’s Cricket And Inspire...
The long-awaited The Hundred competition is set to revolutionise cricket and will finally kick off this [ ... ]
cricket
Should Test Cricket Lose The Toss After India's Battering Of...
England have nobody to blame but themselves for the manner of their 317-run mauling at the hands of [ ... ]
cricket
Sidebottom Hails ''Fantastic'' Root And ''Stunning'' Anderson...
Ryan Sidebottom has heaped praise on both Jimmy Anderson and captain Joe Root following England’s [ ... ]
cricket
Fantastic Jimmy Anderson Wraps Up A Statement England Win In...
England wrapped up a dominant First Test win over India on Tuesday, with Jimmy Anderson collecting three [ ... ]
cricket
100 Up! Joe Root's Timely Form Could Be The Difference For England...
He is the baby-faced batsman who slotted into England’s line-up in India in 2012-13 and immediately [ ... ]
cricket
Tailenders Is The Easy-Listening Pod That Takes An Alternative...
At the moment, we’re all enamoured with cricket, thanks to India digging in and out-saucing the [ ... ]
cricket
The New Book Shining A Light On The Biggest Scandal In Cricket...
It has been nine years since the News of the World ceased publication. Nine years. Doesn’t time [ ... ]
cricket
How Botham And England Revived The Spirits Of A Nation At The...
In the summer of 1981 a combination of spiralling unemployment and racial tension had led to riots in [ ... ]
cricket
Ben Stokes Inspires England Victory In Five-Day Test Classic
This was five-day test match cricket at its finest. Ben Stokes took the final three wickets on Tuesday [ ... ]
cricket
Batting Legend Tendulkar Warns ICC Five-Day Tests ''Should Not...
If you’re looking for a cricket batting record, odds on Sachin Tendulkar probably owns it. The [ ... ]
cricket
England Head To South Africa Test In Search Of Answers And A...
England end a historic 2019 by taking on South Africa in the First Test in Centurion this week. But [ ... ]
cricket
England World Cup Winner Moeen Ali's Conscious Uncoupling From...
“I just want to get that buzz back”. England’s Moeen Ali has continued to put [ ... ]
cricket
England Fail To Win A Test Series In A Calendar Year For First...
England have lost another Test series in 2019, which brings to a close a difficult 12 months that has [ ... ]
cricket
Joe Root Double Century Gives England A Glimmer Of Hope Against...
Joe Root hit a stunning double century to give England a slight hope of victory against New Zealand [ ... ]
cricket
Pope Steps Up After Baffling Selection Leaves England Short...
It is ever difficult to predict exactly what will unfold when England go on tour. Ollie Pope, a man [ ... ]
cricket
Book Review - Ben Stokes: On Fire
Like rugby, cricket fancies itself as a bit of a proving ground for leadership and performance techniques, [ ... ]
cricket
Ben Stokes Throws His Weight Behind ''England's Best'' Joe Root
Ben Stokes has leapt to the defence of under-fire England Test captain Joe Root following the heavy [ ... ]
cricket
The Time Has Come For Joe Root To Step Down As Captain And Focus...
Joe Root loves a soft dismissal these days.  Should England decide to move him aside as captain [ ... ]
cricket
Steve Smith's Welsh Fire To Face Oval Invincibles In First Game...
Steve Smith and Jonny Bairstow will clash with Jason Roy and Sam Curran in the world’s first-ever [ ... ]
cricket
England's 'New Era' Gets Off To Worst Possible Start Against...
England's 'new era' under Chris Silverwood got off to a humiliating start with a huge innings [ ... ]
cricket
Why England's T20 Triumph Over New Zealand Matters More Than...
There could not have been a more fitting antidote to the slightly subdued atmosphere surrounding England’s [ ... ]
cricket
Why Ashes Win For Australia Could Be A Good Thing In Long Term...
It might well have been a headline from 2019. That famous obituary we all know so well, written [ ... ]
cricket
Five Things That Prove Steve Smith Ain't Perfect
Steve Smith. The best batsman in the world and seemingly impossible to get out from an English point [ ... ]
cricket
Manchester In The Rain: Five Things To Do When The Ashes Is...
Ah, Manchester. The proud home of The Sportsman is known throughout the world for its music, sport and [ ... ]
cricket
Ashes Hero Ben Stokes Must Be Considered Test Cricket's Best...
With every switch-hit, Ben Stokes eclipsed Botham of ’81. In the process, the third Ashes Test [ ... ]
cricket
England’s Lion Heart Jack Leach Is Granted Free Glasses For...
Specsavers have made good on Ben Stokes’ request to grant Jack Leach free glasses for life after [ ... ]