Darts
News
It has been a long time coming, but the fans are back in the building, and the players are loving it
Simon Lillicrap
11:03, 23 Jul 2021

Barry Hearn caught up with Betfred TV after the matches and reflected upon a night that saw the very best of a sporting crowd. Although he accepted that sport has paled into insignificance in the last 18 months, he insisted that sport does have a part to play in lifting the spirits of the public.

“We all know it has been a terrible time,” Hearn said. “You can’t cry that sport has suffered because there is a bigger picture out there, people have suffered. I hope to god we have turned a corner and the vaccine programme is working and let’s just be grateful for what we have now, which is a return to some type of normality.”

That normality saw dance moves from both Price and Van den Burgh on stage, which sent the crowd absolutely wild.

“We have had the Euros which gave us a lift, now we have full capacity sporting events. We need to roll out this vaccine. The message is clear, on international travel that is going to be the last big hurdle that may take some time, but domestically, we are getting back to normal, we should appreciate it, embrace it, and enjoy it.

“Sport needs fans more than anything else. Take away that atmosphere and sport becomes just another occasion, it is not something special. The noise, the atmosphere and the energy that fans give sports just can’t be bought in a bottle, you have to experience it and get behind it.

“You have seen the players, how much they appreciate it. They were born to entertain and they need a crowd to entertain and I think they are grateful. I think that is a good word to use, and so they should be. We are not quite back to normal, we are not far away, and my word there is a couple more days of fun in the Betfred World Matchplay to come.”

Before Van den Burgh’s masterful display, Krzysztof Ratajski reached the last four for the first time in his career after a 16-8 victory over Callan Rydz. Friday night sees Peter Wright, who has claimed that he is the man to lift the title, take on Michael Smith before Michael van Gerwen faces Nathan Aspinall. 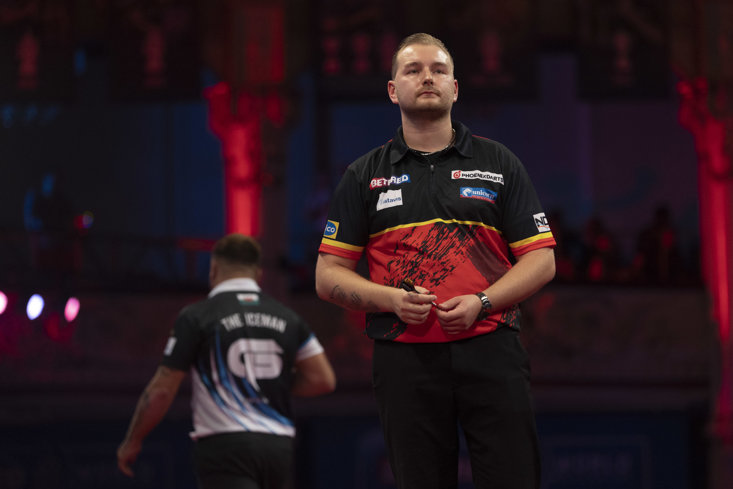 The Blackpool action is relentless and darts fans have barely had chance to pause for breath with stars of the oche providing pulsating matches on a regular basis.

It’s a format that Matchroom Sport founder Barry Hearn is fond of, and he was as excited as anyone else after another barnstormer of a night on the Lancashire coast.

“What a night of darts,” Hearn beamed. “It doesn’t get much better than that. But look at Friday, what a line-up. Van Gerwen playing against Nathan Aspinall, these games just keep coming, Peter Wright up against Michael Smith. The quality in the matchplay, you always wonder why players say this is their favourite event? You’ve only got to listen to the crowd, you’ve only got to listen to the atmosphere.”

‘Mighty Mike’ was the last player to win back to back World Matchplay titles when he followed up his 2015 triumph with a victory over Phil Taylor a year later.

After his dominant 16-9 victory over Price, Van den Burgh remains in the hunt to repeat MVG’s heroics, and Hearn believes that the Belgian has the tools to defend his crown.

“He’s a nice kid, and a smart kid,” the 73-year-old added. “He couldn’t win on the floor, he was always looking for the big stage and wanted the big stage, but he has matured.”

After mentoring his son, Eddie, in building up the boxing branch of Matchroom’s empire, Hearn knows a thing or two about a father’s influence, and can see how that has helped ‘The DreamMaker’.

“His father is a very solid influence on him, he has a very solid background, he has a brain, and now he is seeing the results of that. Look at him under pressure, Gerwen Price is an intimidating player to play against, he just coped with it and kept calm, he kept smooth, the angle of the flight and delivery of the arm looked absolutely perfect, and it is that technique that will take him on to great things.”

Betfred make Wright and van Gerwen the favourites to join van den Bergh and Ratajski in the last four, but one thing is for certain.

You don’t want to miss out.