England’s new-look Lions begin their three-match tour of the West Indies on Tuesday desperate to restore some much-needed pride.

Joe Root leads a reshuffled squad to the Caribbean in the aftermath of the winer’s Ashes debacle. Eight players were axed from the under-performing squad which suffered a humiliating 4-0 defeat at the hands of their arch rivals.

And under the new stewardship of interim Director of Cricket Andrew Strauss and stand-in coach Paul Collingwood, England have hit the ‘reset’ button after their recent failings in the longest format of the game.

It is well documented how surprising it was that stalwart seamers James Anderson, 39, and Stuart Broad, 35 — with well over 1,100 Test scalps between them — were dropped from the squad.

The fact it sparked such outrage is testament to the evergreen duo’s incredible longevity. They simply shouldn’t be as good as they are at this stage of their illustrious careers.

They have aged like a fine wine. But herein lies the problem the England hierarchy are faced with because it stunts the natural progression of the bowling attack with a huge void to be filled when they finally hung up their bowling boots. That decision may well have been taken out of their hands and if it has they deserve so much more after almost two decades of brilliance.

There are striking similarities to the 1989/90 trip to the Caribbean. Star all-rounder Ian Botham and batter David Gower were shockingly omitted after a disastrous home Ashes tour, where England probably would have lost 6-0 if they weren’t aided by the weather.

That tour was famously the first which Sky broadcast live back to the UK. It was billed as the young lions fighting fire with fire against West Indies’ great fast bowlers. Future England captains Nassar Hussain and Alec Stewart so the formula has some merit. All new stars need to be born somewhere. 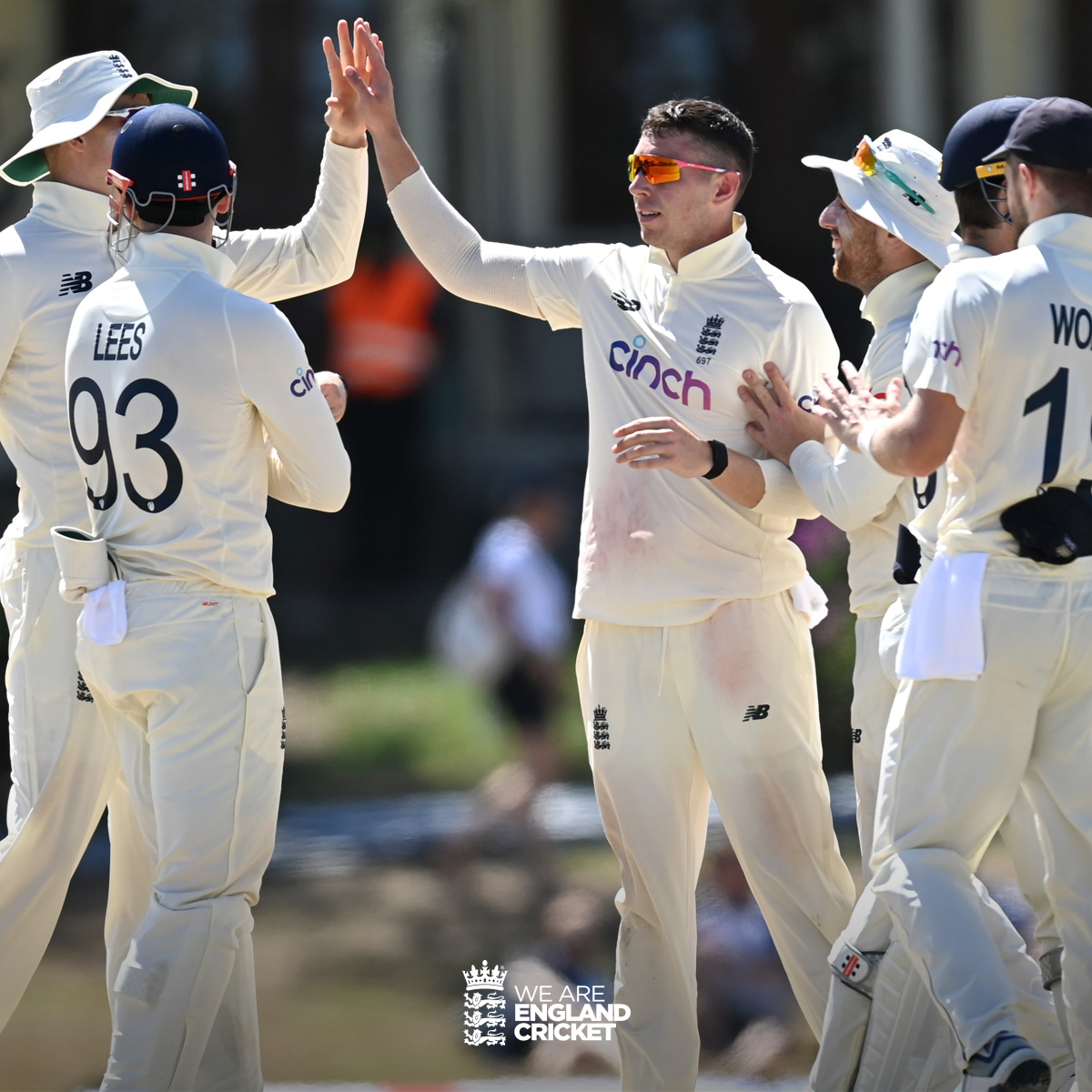 But, to call it a reset is a bit of a stretch with captain Root, Ben Stokes, Jonny Bairstow and Chris Woakes boasting over 300 Test caps between them.

And there is experience in the squad, albeit not consistently at the top level. Uncapped opening batsman Alex Lees is 28 and alongside fresh-faced bowlers Saqib Mahmood, Matthew Fisher and Matthew Parkinson were somewhat surprise inclusions as determined England look to overhaul their failing fortunes.

The quintet of seam bowlers picked for the solitary warm-up game against the President’s XI — Mark Wood, Chris Woakes, Ollie Robinson and Craig Overton — have an average age of 30. It’s not as if they are raw teenagers still learning their craft.

It would be disrespectful to the West Indies to call it a development tour, but captain Root did just that in his pre-series press call and that’s the corner the ECB have backed themselves into.

They may not be the dominant force which hammered all comers for nigh on two decades with a battery of fast bowlers, but that doesn’t hide the fact England are searching for just their second Test series victory against the proud nation in 54 years.

The early signs are good as the visiting batters got much-needed time, and runs, in the middle in Antigua. Bairstow, England’s only centurion Down Under in the winter, reached three figures, whilst Root, Zak Crawley, Lees and Dan Lawrence all got 50s.

Speedster Wood, who impressed with his hostility and ability to keep himself fit during the Ashes, frustratingly went down with a bug.

The time has come for England’s players to stand up and be counted.

Skipper Root said: “This is an opportunity for other guys to step into that space and become leaders as well. I want those guys step into that void and enjoy that challenge, and enjoy becoming more senior within the group.

“Ultimately, we've got to look after what's right in front of us. And that's this tour and making sure we get as much of that right as we possibly can.”

x
Suggested Searches:
The Sportsman
Manchester United
Liverpool
Manchester City
Premier League
More
cricket
Stokes The Skipper: However Long It Lasts, It Should Be One...
He dragged England from the brink in the 2019 World Cup final to help record the most dramatic victory [ ... ]
cricket
Joe Root's Resignation Leaves England's Men's Test Team At An...
Now what do England do? They have failed to win any of their last nine Men’s Tests, have one victory [ ... ]
cricket
Everything You Need To Know About The Hundred 2022
The Hundred is back for its second edition and with the draft having taken place earlier this week, [ ... ]
cricket
Why The Hundred Deserves The Main Billing Ahead Of Suffering...
While England’s women flew the flag proudly for the nation during the recent World Cup, England’s [ ... ]
cricket
England Suffer Final Heartbreak As Australia Win Women's World...
England suffered heartbreak on the grandest stage as history makers Australia blasted their way to a [ ... ]
cricket
Can Underdogs England Secure Most Unlikely World Cup Win vs...
England have risen like a phoenix from The Ashes and are out for redemption in the Women’s World [ ... ]
cricket
Can Heather Knight's England Complete Staggering Turnaround...
Resurgent England have produced a remarkable turnaround to keep their Women’s World Cup title [ ... ]
cricket
Root Of The Problem: Do England Need A Change Of Captain?
It’s true: England have become the laughing stock of world cricket. So, has the time come for [ ... ]
cricket
West Indies vs England Preview: Lifeless Pitches Will Kill Test...
Sir Geoffrey Boycott had it right when he said “The future of Test cricket is at stake — [ ... ]
cricket
England Once Again Fail To Find Knockout Blow In Hard-Fought...
England captain Joe Root stressed he saw plenty of “progression” from his side after a gruelling [ ... ]
cricket
Shoots Of Recovery: England Batsmen Finally Re-Pay Under Fire...
England endured an Ashes series to forget. Hammered by arch-rivals Australia, skipper Joe Root just [ ... ]
cricket
Australian Cricket Legend Shane Warne Dies At 52
Australian cricket legend Shane Warne has died at the age of 52 after a suspected heart attack. Warne, the [ ... ]
cricket
Australia, New Zealand Or England: Who Will Win The Women's...
We’re back in New Zealand for a women’s Cricket World Cup, 22 years after the last tournament [ ... ]
cricket
England's Women Can Redeem Winter Of Discontent With World Cup...
England head to this year’s ICC Women’s World Cup in New Zealand hungry to win their [ ... ]
cricket
England Cricket In Chaos: More Questions Than Answers, But What's...
England have become the laughing stock of world cricket this winter.  It was a shocking showing [ ... ]
cricket
England's Women Round Off Dismal Ashes Winter With Another Heavy...
England’s miserable Ashes came crashing to a horrible end as they were resoundingly thrashed by [ ... ]
cricket
Women’s Ashes: Australia Seal Series Win After Dismal England...
An England cricket team collapsing in a heap in Australia, it’s the recurring nightmare for English [ ... ]
cricket
England’s Ashes Over As Australia Put Them To The Sword In Canberra
England women knew they needed to win the opening One Day International against Australia to keep their [ ... ]
cricket
Should Eoin Morgan, England's Greatest Ever White Ball Captain,...
Eoin Morgan will always be revered as England’s greatest ever white-ball captain, but has the [ ... ]
cricket
England's Men Beaten Again By West Indies As Winter Of Discontent...
England’s sorry winter went from bad to worse as they suffered a shock 3-2 T20I series defeat [ ... ]
cricket
More Test Matches Please! Women's Ashes Thriller Leaves Us Wanting...
The enthralling finish to the women’s one-off Ashes Test highlights the need for the sport to [ ... ]
cricket
England And Australia Draw In One Of Best Test Matches In Women's...
WOW. Just wow. What a game of Test cricket! England’s men really put us through the ringer when [ ... ]
cricket
Moeen Ali Inspires England To Keep T20 Series Well And Truly...
Take a bow Moeen Ali! England’s stand-in skipper stood up and produced when it really mattered [ ... ]
cricket
Rain Washes Away Chances Of Unlikely England Victory In The...
Captain Heather Knight and veteran bowler Katherine Brunt set up an unlikely shot at victory in the [ ... ]
cricket
Women's Ashes: Heather Knight's Superb Century Keeps England...
England skipper Heather Knight constructed a stunning unbeaten century on the second day of the Ashes [ ... ]
cricket
Women's Ashes: Australia Take Control As England Let Early Advantage...
Australia are in command of the solitary Women’s Ashes Test after England were made to rue their [ ... ]
cricket
England's Woeful Winter Continues As West Indies Secure 20-Run...
England’s woeful winter continued as Rovman Powell’s devastating history-making hundred [ ... ]
cricket
10 Days After A Broken Jaw, Beth Mooney Wants To Terminate England's...
Australia’s cricket culture has long been built on being hard and they don’t come much tougher [ ... ]
cricket
England Edge West Indies By One Run As They End Miserable Losing...
Finally! Finally England have given their loyal fans back home something to cheer about.  It’s [ ... ]
cricket
It’s Not The Ashes, But England’s Men Are Embarrassingly Hammered...
Optimism. Hope. Belief. Please give us something England! What a torrid winter it’s been for our [ ... ]