Cricket
News
‘The Thin White Line’ illuminates one of the most shocking examples of corruption ever seen in sport
Jack Porter
09:00, 02 Sep 2020

It has been nine years since the News of the World ceased publication. Nine years. Doesn’t time fly?

The year before its ignominious ending however, the British newspaper, despite all its controversies, had one last hurrah, one last ball-buster of a story that exposed corruption at the highest level. Almost exactly a decade ago the cricketing world exploded. In August 2010, News of the World reporter and undercover journalist Mazher Mahmood posed as the infamous ‘Fake Sheikh’ in order to expose a cricket bookie named Mazhar Majeed, who claimed Pakistani cricketers had committed spot-fixing during Pakistan's 2010 tour of England. It was a scandal in the highest echelons of the sport.

A new book guides you through the irrefutable evidence of fixing, in a Test between two major nations, at the home of cricket, with all those involved subsequently sent to jail. It takes the reader through the back-handers, back-biting, and back-stabbing, from defendants turning on each other, perceived entrapment, and sports-stars legacies completely eradicated. A transcontinental journey from the cricket pavilion to the court-room. And despite the controversial publication that announced the news to the world, this fresh account pays due tribute to the ‘gold-standard’ of journalism involved, a story that swept the board at the UK Press Awards and hasn’t been emulated since :“No one who has gone down this path since has even come close to hitting that sweet spot.” 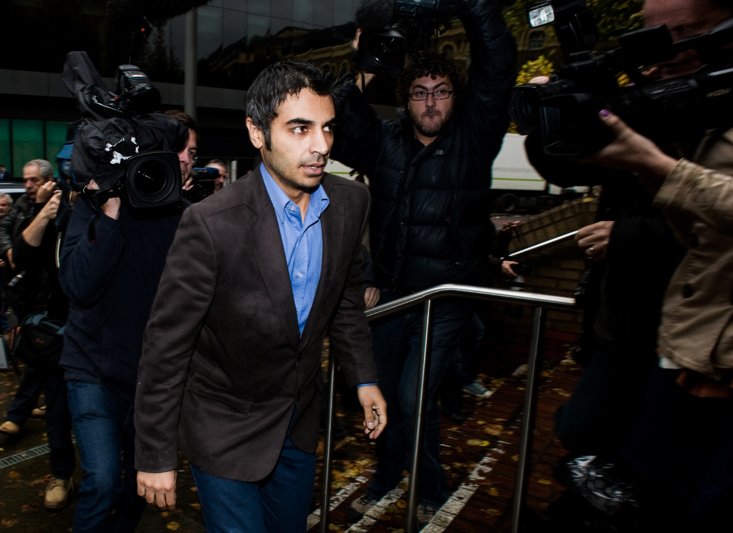 “CAUGHT!’ the NotW front page was typically bombastically emblazoned, depicting the match-fixer pocketing a stonking £150,000 for the Test at Lord’s. A year later, in November 2011, the cricketers Salman Butt and Mohammad Asif were found guilty by a London court on criminal charges relating to spot-fixing. Their teammate, fast bowler Mohammad Amir, and Mahjeed had entered guilty pleas on the same charges.

Spies, agents, it was espionage on the Oval. Now, in ‘The Thin White Line’, an hour-by-hour account has been excellently compiled to illuminate once-again one of the most shocking examples of corruption ever seen in sport, let alone cricket. The book, expertly written by the deputy sport editor of The Sunday Times, Nick Greenslade, features testimonies by the reporter who broke the earth-shattering story, the man known as the ‘Fake Sheikh’ and who would himself end up behind bars.

We may think of it as a ten-year-old saga relegated to the past, but in the final pages of this excellent study by a journalist at the top of his game, this book reaffirms that this shouldn’t be considered a blemished middle chapter in a long illustrious historical sport. Rather, it possesses the sinister undertones of being both a warning and a precedent, which may still prevail in the game.

x
Suggested Searches:
Manchester United
Liverpool
Manchester City
Marcus Rashford
Premier League
More
cricket
Sophia Dunkley Is England's Newest Cricketing Icon That Can...
Sophia Dunkley is a history maker. She became the first black woman to play Test cricket for England’s [ ... ]
cricket
ECB Right To Suspend Ollie Robinson As Cricket Looks To Learn...
Culture Secretary Oliver Dowden joined a number of outspoken critics of the ECB’s suspension of [ ... ]
cricket
New Zealand Bring Desire, England Are Just Dire As First Test...
When New Zealand could have batted for a draw, they went hell for leather on the final day at Lord’s. [ ... ]
cricket
''I Can Still Improve'' Jimmy Anderson Part Of Resurgent Older...
Whisky. Fine wine. Jimmy Anderson. Just three things that get better with age. England’s highest [ ... ]
cricket
World's Best Cricketer Ben Stokes Has Become England's Imperfect...
If there is one thing the British public love more than an underdog story, it is a tale of redemption. [ ... ]
cricket
England Just Fall Short Against India Despite Sam Curran Heroics...
England came up short against India, losing by just seven runs in an absolutely thrilling ODI decider [ ... ]
cricket
England’s Aggressive Batting Pays Off As Bairstow And Stokes...
When England’s top three bat like this, there is simply no side in the world that can stop them. [ ... ]
cricket
Three Years On, Steve Smith Deserves Big Praise For His Response...
On this day three years ago the entire sporting world collapsed on Steve Smith’s shoulders. In [ ... ]
cricket
Root's Calm Head Missed As England Collapse To 66-Run ODI Loss...
India have defeated England by 66 runs in the first one-day international in a game that will once again [ ... ]
cricket
India T20 Win Over England Could Be Perfect Precursor To 2021...
England have lost the T20 series in India 3-2 having been comprehensively beaten in the final match. [ ... ]
cricket
Blistering Buttler Leads England To Bounce-Back T20 Win Over...
England showed their resilient side on Tuesday as they bounced back from Sunday’s defeat in the [ ... ]
cricket
Kohli Takes Centre Stage As England Come Up Short Against India...
England came up short in the second T20I match v India, losing by seven wickets as Virat Kohli proved [ ... ]
cricket
Archer And Roy Star As England Sweep India Aside In Opening...
England began Twenty20 World Cup year in emphatic fashion as they hammered India by eight wickets in [ ... ]
cricket
Weather No Excuse, England Must Learn From Woeful Batting Performance...
How quickly things can change. England’s 227 run win in the First Test v India feels like a lifetime [ ... ]
cricket
Why A Massive Fourth Test Against India Could Define England's...
England’s whole year might well ride on the outcome of Thursday’s Fourth Test against India. [ ... ]
cricket
Brittle England Beaten Inside Two Days As India Survive The...
It was one of the most chaotic days of Test cricket ever but by shortly after tea on day two in Ahmedabad [ ... ]
cricket
Sidebottom Wants To See Both Broad And Anderson Play Third Test...
Former England bowler Ryan Sidebottom says England ought to select both Stuart Broad and Jimmy Anderson [ ... ]
cricket
The Hundred Can Help Revolutionise Women’s Cricket And Inspire...
The long-awaited The Hundred competition is set to revolutionise cricket and will finally kick off this [ ... ]
cricket
Should Test Cricket Lose The Toss After India's Battering Of...
England have nobody to blame but themselves for the manner of their 317-run mauling at the hands of [ ... ]
cricket
Sidebottom Hails ''Fantastic'' Root And ''Stunning'' Anderson...
Ryan Sidebottom has heaped praise on both Jimmy Anderson and captain Joe Root following England’s [ ... ]
cricket
Fantastic Jimmy Anderson Wraps Up A Statement England Win In...
England wrapped up a dominant First Test win over India on Tuesday, with Jimmy Anderson collecting three [ ... ]
cricket
100 Up! Joe Root's Timely Form Could Be The Difference For England...
He is the baby-faced batsman who slotted into England’s line-up in India in 2012-13 and immediately [ ... ]
cricket
Tailenders Is The Easy-Listening Pod That Takes An Alternative...
At the moment, we’re all enamoured with cricket, thanks to India digging in and out-saucing the [ ... ]
cricket
How Botham And England Revived The Spirits Of A Nation At The...
In the summer of 1981 a combination of spiralling unemployment and racial tension had led to riots in [ ... ]
cricket
Ben Stokes Inspires England Victory In Five-Day Test Classic
This was five-day test match cricket at its finest. Ben Stokes took the final three wickets on Tuesday [ ... ]
cricket
Batting Legend Tendulkar Warns ICC Five-Day Tests ''Should Not...
If you’re looking for a cricket batting record, odds on Sachin Tendulkar probably owns it. The [ ... ]
cricket
England Head To South Africa Test In Search Of Answers And A...
England end a historic 2019 by taking on South Africa in the First Test in Centurion this week. But [ ... ]
cricket
England World Cup Winner Moeen Ali's Conscious Uncoupling From...
“I just want to get that buzz back”. England’s Moeen Ali has continued to put [ ... ]
cricket
England Fail To Win A Test Series In A Calendar Year For First...
England have lost another Test series in 2019, which brings to a close a difficult 12 months that has [ ... ]
cricket
Joe Root Double Century Gives England A Glimmer Of Hope Against...
Joe Root hit a stunning double century to give England a slight hope of victory against New Zealand [ ... ]