On this day three years ago the entire sporting world collapsed on Steve Smith’s shoulders. In a Test Match against South Africa on 24 March 2018, he, along with Cameron Bancroft and David Warner were involved in the sandpaper scandal that would shake cricket to its core, but it was captain Smith who took the brunt of the blame.

After lunch on that fateful day, in what was already a heated series due to the exchanges between Warner and Quinton De Kock, Bancroft was caught tampering with the ball with a small piece of yellow sandpaper, even if he tried to pass it off as a bit of tape when questioned in the press conference that followed.

It is difficult to remember a time in recent years where the sporting world has unified together in the condemnation of cheating quite like this. Even the Australian Prime Minister at the time, Malcom Turnbull, said it was a “shocking disappointment” as a team who were praised so heavily having just won the Ashes now faced the full consequences of their actions.

Then-captain Smith was rightly seen as the figurehead of this entire cheating scandal. He and Warner were both banned from cricket for 12 months as he was hammered from all angles for his knowledge of ‘Sandpapergate’. His teary press conference at Sydney airport was perhaps the defining image of this entire scandal for Smith.

Here, in front of the world’s media, was a man who had gone from hero to zero. His emotions spilled out in front of us and, while his tears were mocked at a time, his words of remorse seemed genuine. “I know I will regret this for the rest of my life. I am absolutely gutted. I'm sorry and I'm absolutely devastated,” Smith said. "To my knowledge this has never happened before. This is the first time I've seen this happen and I can assure you it will never happen again.”

Despite his ban, and his staying out of the spotlight for a year, cricket fans don’t forget things like that. As he made his return to the Australian squad as part of the tour of England for the 2019 Ashes series, the reception he got was brutal. Sandpaper was waved at him wherever he went, crowds would boo him at every turn, and Jofra Archer was intent on roughing him up on the pitch. At Lords, every brutal bouncer to his body was cheered, until he eventually had to go off injured. It was a hostile environment to try to play cricket in. 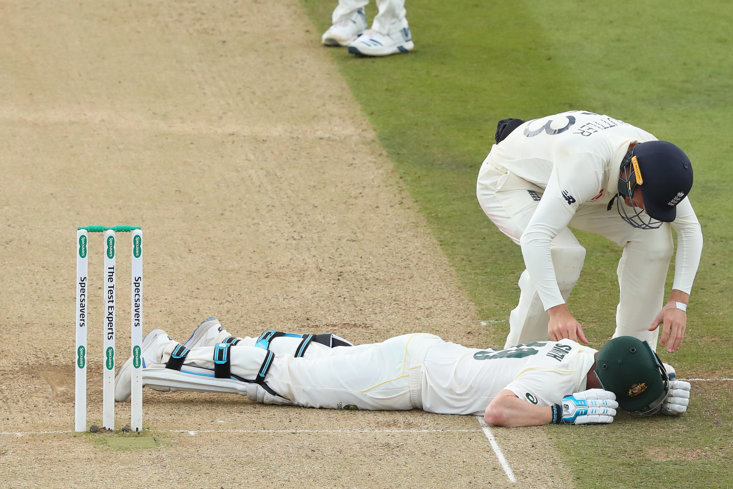 SMITH IS INJURED BY A JOFRA ARCHER BOUNCER

Smith, as we saw in the excellent documentary series ‘The Test’ on Amazon Prime, never complained about this treatment, and was intent on letting his cricket do the talking. He hit back-to-back centuries at Edgbaston, before smashing a crucial 211 at Old Trafford in a win which ensured that Australia retained the Ashes.

By that fourth Test in Manchester, following the brutal treatment he had received both on and off the field, he was applauded by the entire stadium as he raised his bat for the second time. Smith had not only proved himself to be the best batsman in the world, becoming the first player to register 10 successive scores of 50 or more against a single opponent in Test history, but he’d also showed a mental resilience and toughness that made him so irritatingly impressive.

He took his punishment and came through the other side of the episode having regained the respect of cricket fans worldwide, and since then he has just kept on performing with the bat. England will look to regain the Ashes when they travel down under in December this year, but Smith will have another big say in who gets their hands on that famous little urn.

He will never be completely forgiven for his role in a scandal that tarnished the reputation of cricket just as it had seemed to have recovered from the Pakistan spot-fixing of 2010, but what we can do is simply stand and admire a wonderful batsman who has come back from the brink to dominate Test cricket once again.

Steve Smith. His name may now be forever tarnished, but his status as a brilliant batsman can never be questioned.

x
Suggested Searches:
Manchester United
Liverpool
Manchester City
Marcus Rashford
Premier League
More
cricket
Ryan Sidebottom: The Hundred Is ''Off To A Great Start'' After...
Ryan Sidebottom believes cricket's divisive new tournament 'The Hundred' proved [ ... ]
cricket
Ryan Sidebottom: Why The Hundred Is A Game Changer For Women's...
For women in particular, The Hundred is huge. Ahead of the first ball being bowled it has had its doubters [ ... ]
cricket
England Can Dream Of Another World Cup Win, Two Years On From...
“By the barest of all margins.” The inimitable Ian Smith couldn’t have summed it up [ ... ]
cricket
The Newcomers Looking To Help Fire England To An ODI Win Against...
An inexperienced England are facing a huge test as they have been forced to name a brand new 18-man [ ... ]
cricket
Perennial Finalists New Zealand Finally Come Good To Win World...
New Zealand finally got the job done. In 2015 they were the entertainers of the tournament at the Cricket [ ... ]
cricket
Sophia Dunkley Is England's Newest Cricketing Icon That Can...
Sophia Dunkley is a history maker. She became the first black woman to play Test cricket for England’s [ ... ]
cricket
ECB Right To Suspend Ollie Robinson As Cricket Looks To Learn...
Culture Secretary Oliver Dowden joined a number of outspoken critics of the ECB’s suspension of [ ... ]
cricket
New Zealand Bring Desire, England Are Just Dire As First Test...
When New Zealand could have batted for a draw, they went hell for leather on the final day at Lord’s. [ ... ]
cricket
''I Can Still Improve'' Jimmy Anderson Part Of Resurgent Older...
Whisky. Fine wine. Jimmy Anderson. Just three things that get better with age. England’s highest [ ... ]
cricket
World's Best Cricketer Ben Stokes Has Become England's Imperfect...
If there is one thing the British public love more than an underdog story, it is a tale of redemption. [ ... ]
cricket
England Just Fall Short Against India Despite Sam Curran Heroics...
England came up short against India, losing by just seven runs in an absolutely thrilling ODI decider [ ... ]
cricket
England’s Aggressive Batting Pays Off As Bairstow And Stokes...
When England’s top three bat like this, there is simply no side in the world that can stop them. [ ... ]
cricket
Root's Calm Head Missed As England Collapse To 66-Run ODI Loss...
India have defeated England by 66 runs in the first one-day international in a game that will once again [ ... ]
cricket
India T20 Win Over England Could Be Perfect Precursor To 2021...
England have lost the T20 series in India 3-2 having been comprehensively beaten in the final match. [ ... ]
cricket
Blistering Buttler Leads England To Bounce-Back T20 Win Over...
England showed their resilient side on Tuesday as they bounced back from Sunday’s defeat in the [ ... ]
cricket
Kohli Takes Centre Stage As England Come Up Short Against India...
England came up short in the second T20I match v India, losing by seven wickets as Virat Kohli proved [ ... ]
cricket
Archer And Roy Star As England Sweep India Aside In Opening...
England began Twenty20 World Cup year in emphatic fashion as they hammered India by eight wickets in [ ... ]
cricket
Weather No Excuse, England Must Learn From Woeful Batting Performance...
How quickly things can change. England’s 227 run win in the First Test v India feels like a lifetime [ ... ]
cricket
Why A Massive Fourth Test Against India Could Define England's...
England’s whole year might well ride on the outcome of Thursday’s Fourth Test against India. [ ... ]
cricket
Brittle England Beaten Inside Two Days As India Survive The...
It was one of the most chaotic days of Test cricket ever but by shortly after tea on day two in Ahmedabad [ ... ]
cricket
Sidebottom Wants To See Both Broad And Anderson Play Third Test...
Former England bowler Ryan Sidebottom says England ought to select both Stuart Broad and Jimmy Anderson [ ... ]
cricket
The Hundred Can Help Revolutionise Women’s Cricket And Inspire...
The long-awaited The Hundred competition is set to revolutionise cricket and will finally kick off this [ ... ]
cricket
Should Test Cricket Lose The Toss After India's Battering Of...
England have nobody to blame but themselves for the manner of their 317-run mauling at the hands of [ ... ]
cricket
Sidebottom Hails ''Fantastic'' Root And ''Stunning'' Anderson...
Ryan Sidebottom has heaped praise on both Jimmy Anderson and captain Joe Root following England’s [ ... ]
cricket
Fantastic Jimmy Anderson Wraps Up A Statement England Win In...
England wrapped up a dominant First Test win over India on Tuesday, with Jimmy Anderson collecting three [ ... ]
cricket
100 Up! Joe Root's Timely Form Could Be The Difference For England...
He is the baby-faced batsman who slotted into England’s line-up in India in 2012-13 and immediately [ ... ]
cricket
Tailenders Is The Easy-Listening Pod That Takes An Alternative...
At the moment, we’re all enamoured with cricket, thanks to India digging in and out-saucing the [ ... ]
cricket
The New Book Shining A Light On The Biggest Scandal In Cricket...
It has been nine years since the News of the World ceased publication. Nine years. Doesn’t time [ ... ]
cricket
How Botham And England Revived The Spirits Of A Nation At The...
In the summer of 1981 a combination of spiralling unemployment and racial tension had led to riots in [ ... ]
cricket
Ben Stokes Inspires England Victory In Five-Day Test Classic
This was five-day test match cricket at its finest. Ben Stokes took the final three wickets on Tuesday [ ... ]