The Cheltenham Festival is on the horizon, and as you start to look at the early card it is worth making a note of the Non Runner No Bet offer from Betfred on all 28 races at this year’s festival. It means that if you have a bet on a horse now for Cheltenham, and they don’t make it or run in a different race, you will get your money back. With lots of targets still undecided for many horses, this added insurance gives the punter peace of mind that their money will not be lost on an ante-post market.

As for the weekend just gone, there was plenty happening as early as Friday, with some really nice performances at Warwick.

Firstly, Cabot Cliffs made all and ran clear of his rivals to record an impressive 17-length success, and he will now head to the Boodles Fred Winter Juvenile H’cap Hurdle at the festival, for which he is a 12/1 shot. It will be difficult to replicate those tactics, but he is clearly in grand heart, loves decent ground and the Skeltons went close in this with Nube Negra a couple of seasons ago.

The next race saw Jay Bee Why win the novice hurdle in different style, though equally impressive. He had tracked the pace before taking it up down the back straight, and quickened up well when challenged between the final two flights. It may not have been a great race, but Alan King wanted to get some more experience into him after he had run well in G2 company over track and trip in January and welcomed this easier opportunity. He will not be going to Cheltenham, and while we may see him at Aintree or Ayr, it is novice chasing next year that the team are most looking forward to. Note his name in your trackers.

On to Saturday at Kempton and Tamaroc Du Mathan was the first novice winner of the day for Paul Nicholls. He travelled well and allayed any trip fears, coming home nicely clear of the duelling leaders Ga Law and Coole Cody. Although he was cut to 8/1 for the Grand Annual, Ayr has been suggested as his next target and the Future Stars Novice Chase at the Scottish Grand National meeting on 17 April. 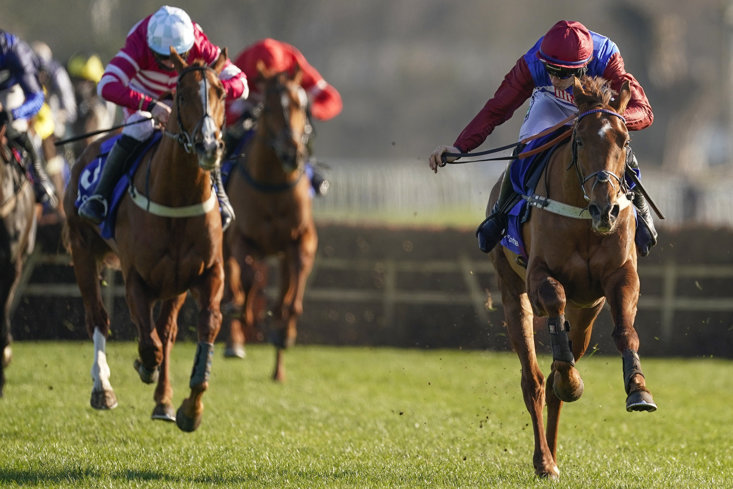 TRITONIC SET OUT HIS CLAIMS FOR A TRIUMPH HURDLE SPOT

Then it was time for talking horse Tritonic to set out his claims for a Triumph Hurdle spot and he delivered in style. He extended his superiority over his Ascot victim Casa Loupi by nine lengths and sprinted away from the last to mark himself down as the leading contender for the juvenile crown on these shores. He will need to brush up on his jumping, although there are only two flights in the final three quarters of a mile on the new course at Cheltenham and we know he stays well from his days as a useful flat performer. He was cut to 4/1 for the opening race on the Friday on the back of this eye-catching display and is a major player for Alan King, who won the race In 2007 with subsequent Champion Hurdler Katchit.

If you were taken with Tritonic, then you will also be keeping an eye on Cape Gentleman for the future after his win in the Dovecote. Both he and Calico travelled well throughout, and when the disappointing favourite Atholl Street wilted on the turn for home it was clear these two would fight out the finish. Calico was in prime position stalking the Irish raider, but he could never get past. The race was run half a second quicker than Tritonic, and Cape Gentleman carried 4lb more. He is not entered in the Supreme but is 20/1 for the Ballymore. However, I would imagine connections may wait for Aintree, or even Punchestown, where he won his maiden effort at the beginning of the season.

That links us nicely to Ireland, where there was a trial for the Champion Hurdle on Saturday at Fairyhouse, and it went to Jason The Militant. Racing presenter Tanya Stevenson had mentioned this horse to us at The Sportsman as a possible outsider for the Champion Hurdle, and he put his name in the mix by giving 9lb and a beating the admirably consistent Petit Mouchoir.

Considering the runner-up was only beaten five lengths in the big two-mile G1 at Christmas, this form entitles Jason The Militant to plenty of respect and is 33/1 for the Champion Hurdle, although soft ground may be important to him to show his best.

At Fontwell on Sunday, Brewin‘upastorm continued his reputation recovery over hurdles when winning the National Spirit at Fontwell. His chasing career never really took off as anticipated, but this win, on the back of a good success at Taunton, will set him up for a tilt at the Aintree Hurdle next month. He comfortably accounted for McFabulous, who was giving the winner 6lb, and I expect the pair will clash again at the Grand National meeting.

Just two weeks and counting now to the Greatest Show on Turf, and with the Non Runner No Bet offer at Betfred, if you have a bet now and your selection does not run or goes in a different race, you will get your money back.