It’s the morning after the night before and newly crowned double world champion Peter Wright woke up next to something truly special. Not just the Sid Waddell trophy that he had won after an impressive 7-5 win over Michael Smith, but also his wife Joanne - mother to his three children.

Snakebite has an awful lot to thank his wife for. She is his inspiration, his manager and of course, his famous hairdresser. “Obviously she is the biggest thing that makes me go and play darts,” Wright tells The Sportsman after winning his second PDC World Championship.

“She tells me to go and practice, she is there for me when I lose, to pick me up and she is there for the great moments of winning. We make a special team. My father-in-law Paul as well, behind the scenes, he does all of the stuff looking after me and that as well. It is one big team with all the people at home as well.” 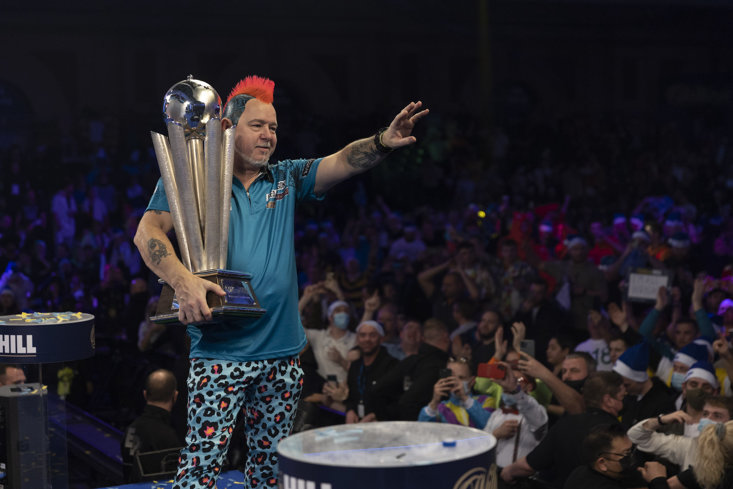 It was Joanne who convinced Wright to give darts another go in the mid 2000s, when they were sitting on the sofa at home.

“It was just watching the darts, the Grand Slam at the time, watching some of the darts players there,” the 51-year-old explains. “I was just playing league darts and stuff like that, and gave it a little dabble in the past. I said to her: ‘I can beat him, I can beat him, blah blah blah’ not everybody obviously.

“Then I was working in a garage and stuff like that, and she said ‘why don't you give it a try then?’ Obviously I did with Jo and her dad's backing. First year was absolutely terrible,” he laughs, recalling some of his early experiences.

Learn from those defeats he certainly did and the win against Smith, who had been phenomenal throughout the entire tournament, netted him a cool £500,000 in prize money. In three weeks he earnt 416 times more than he did in his entire first year on the circuit. However, the money isn’t important to Snakebite, who is just after some new underwear.

“All I want is some more socks, and some more Space Jam boxer shorts!”

However, his wife Jo is quite rightly taking some credit for where her husband is today, and he admits he wouldn’t be the two-time world champion without her. “She does drum into my head that 'I got you where you are', but I do say to her that 'I throw the darts, you don't!”

From that rough first year in 2008, in which he was handed defeat after defeat, Wright has risen through the ranks and has now won back the title he last won in 2020. But despite the setbacks, he always dreamt of this moment.

After a battling display against Bully Boy, he showed great compassion on stage to his opponent, who is still targeting a first major title. Having now won the World Matchplay and the World Championship over the past twelve months, Wright was still keen to offer some words of wisdom to the 31-year-old.