Cricket
News
The Fourth Test in Ahmedabad could be vital to England's hopes down under
Kris Voakes
16:15, 03 Mar 2021

England’s whole year might well ride on the outcome of Thursday’s Fourth Test against India. That might sound a bit dramatic, what with them having another 12 Test matches to come in the next 10 months, but when it comes to Ashes cycles, momentum and mentality can play a massive part.

After winning their series in Sri Lanka on the back of Joe Root’s brilliance with the bat and adding a First Test victory against India in Chennai on the back of more magic from the captain, the utter gubbings they have been handed in the last two matches have been a reminder of how harsh Test cricket can be. Another mauling in Ahmedabad starting on Thursday, and there could yet be some serious repercussions.

Of course, they have a whole summer to recalibrate ahead of their tour down under at the end of the year, but when it comes to England v Australia clashes, psychology usually has a big say. Going to Oz with a heavy 3-1 defeat their most recent touring memory would hardly be the greatest of preparation, even if the home season series with New Zealand and India go particularly well.

Think back to 2013, when England absolutely hammered Australia and still managed to somehow come out of the series with doubts in their minds as they headed for the reverse series three months later. Their 3-0 win at home ought to have been all the confidence-booster they needed as they looked to retain the urn for the fourth time in a row, but it was Australia who left The Oval after the Fifth Test talking up their hopes the most.

Shane Watson and Steve Smith both hit huge hundreds to put Australia in the driving seat in south London before the rain washed out a whole day, and suddenly coach Darren Lehmann was talking like a leader whose troops had just won 3-0 rather than lost by the same score, and after clinching a 2-1 win in the ODI series which followed, he was bullish about his side’s hopes back in Australia. Somehow they had seized the momentum. 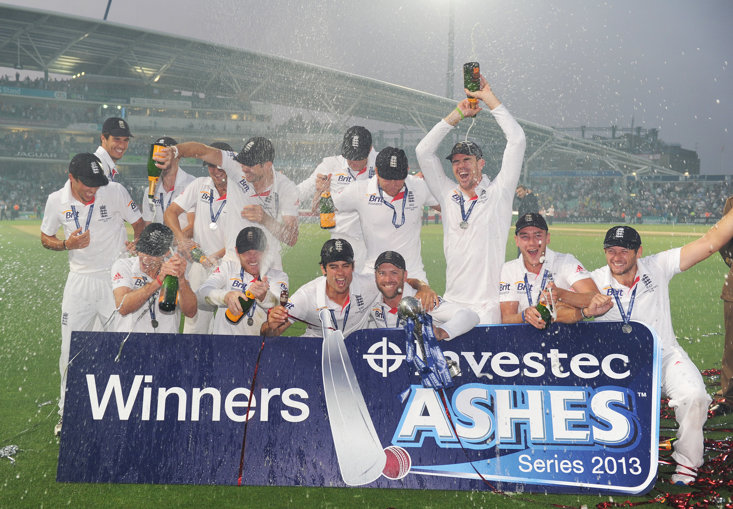 ENGLAND WON THE BATTLE IN THE SUMMER OF 2013, BUT SOON LOST THE WAR

“The way we played, especially in the last three Tests, we were very, very good except for two hours in Durham [in the Fourth Test],” Lehmann said afterwards. “We just need to be consistent and grab the big moments and we know that. It was closer than people think but at the end the result was 3-0 so we have got to improve. We know the conditions at home will probably suit us better than England.” His team promptly won the Ashes back with a 5-0 whitewash that England have never really got over.

That point that Lehmann was at between series is what England will be contemplating right now. This will be their last Test match away from home before heading down under. They can lean on favourable conditions at home this summer, but a win in Ahmedabad and a 2-2 series tie in really difficult circumstances against Virat Kohli’s in-form India – who just beat Australia in Australia, let’s not forget – would be a massive fillip for Joe Root, Chris Silverwood and the team.

It will take a number of players finding form, including the top-order batsmen who have failed with regularity this winter and the weak middle-order, but if England can show their fighting spirit and chisel out a famous win then that could really give them the momentum that great Test cricket sides thrive on.

Win it, and this has been a really encouraging winter to kick-start one of the most monumental years of England’s Test cricket history. Lose it, and the next 10 months suddenly look that much more daunting.

We will learn a lot about this England side over the next five days.

x
Suggested Searches:
Manchester United
Liverpool
Manchester City
Marcus Rashford
Premier League
More
cricket
The Greatest Test Match: England's 2005 Edgbaston Ashes Win...
It felt like the peak of Test cricket at the time. Arguably, it remains the greatest ever game in the [ ... ]
cricket
Time For Joe Root's England To Find Some Consistency - Sidebottom
Former England Test bowler Ryan Sidebottom insists that Joe Root’s side must turn in a stirring [ ... ]
cricket
Ben Stokes' Break From Cricket Highlights The Strides Made On...
It is a truly wonderful thing that Ben Stokes will not be in England’s Test squad to face India [ ... ]
cricket
Ryan Sidebottom: England's T20 Hopes Have Received A Huge Boost...
We’ve seen the likes of Jonny Bairstow, Ben Duckett and James Vince flashing the bat to great [ ... ]
cricket
Ryan Sidebottom: The Hundred Is ''Off To A Great Start'' After...
Ryan Sidebottom believes cricket's divisive new tournament 'The Hundred' proved [ ... ]
cricket
Ryan Sidebottom: Why The Hundred Is A Game Changer For Women's...
For women in particular, The Hundred is huge. Ahead of the first ball being bowled it has had its doubters [ ... ]
cricket
England Can Dream Of Another World Cup Win, Two Years On From...
“By the barest of all margins.” The inimitable Ian Smith couldn’t have summed it up [ ... ]
cricket
The Newcomers Looking To Help Fire England To An ODI Win Against...
An inexperienced England are facing a huge test as they have been forced to name a brand new 18-man [ ... ]
cricket
Perennial Finalists New Zealand Finally Come Good To Win World...
New Zealand finally got the job done. In 2015 they were the entertainers of the tournament at the Cricket [ ... ]
cricket
Sophia Dunkley Is England's Newest Cricketing Icon That Can...
Sophia Dunkley is a history maker. She became the first black woman to play Test cricket for England’s [ ... ]
cricket
ECB Right To Suspend Ollie Robinson As Cricket Looks To Learn...
Culture Secretary Oliver Dowden joined a number of outspoken critics of the ECB’s suspension of [ ... ]
cricket
New Zealand Bring Desire, England Are Just Dire As First Test...
When New Zealand could have batted for a draw, they went hell for leather on the final day at Lord’s. [ ... ]
cricket
''I Can Still Improve'' Jimmy Anderson Part Of Resurgent Older...
Whisky. Fine wine. Jimmy Anderson. Just three things that get better with age. England’s highest [ ... ]
cricket
World's Best Cricketer Ben Stokes Has Become England's Imperfect...
If there is one thing the British public love more than an underdog story, it is a tale of redemption. [ ... ]
cricket
England Just Fall Short Against India Despite Sam Curran Heroics...
England came up short against India, losing by just seven runs in an absolutely thrilling ODI decider [ ... ]
cricket
England’s Aggressive Batting Pays Off As Bairstow And Stokes...
When England’s top three bat like this, there is simply no side in the world that can stop them. [ ... ]
cricket
Three Years On, Steve Smith Deserves Big Praise For His Response...
On this day three years ago the entire sporting world collapsed on Steve Smith’s shoulders. In [ ... ]
cricket
Root's Calm Head Missed As England Collapse To 66-Run ODI Loss...
India have defeated England by 66 runs in the first one-day international in a game that will once again [ ... ]
cricket
India T20 Win Over England Could Be Perfect Precursor To 2021...
England have lost the T20 series in India 3-2 having been comprehensively beaten in the final match. [ ... ]
cricket
Blistering Buttler Leads England To Bounce-Back T20 Win Over...
England showed their resilient side on Tuesday as they bounced back from Sunday’s defeat in the [ ... ]
cricket
Kohli Takes Centre Stage As England Come Up Short Against India...
England came up short in the second T20I match v India, losing by seven wickets as Virat Kohli proved [ ... ]
cricket
Archer And Roy Star As England Sweep India Aside In Opening...
England began Twenty20 World Cup year in emphatic fashion as they hammered India by eight wickets in [ ... ]
cricket
Weather No Excuse, England Must Learn From Woeful Batting Performance...
How quickly things can change. England’s 227 run win in the First Test v India feels like a lifetime [ ... ]
cricket
Brittle England Beaten Inside Two Days As India Survive The...
It was one of the most chaotic days of Test cricket ever but by shortly after tea on day two in Ahmedabad [ ... ]
cricket
Sidebottom Wants To See Both Broad And Anderson Play Third Test...
Former England bowler Ryan Sidebottom says England ought to select both Stuart Broad and Jimmy Anderson [ ... ]
cricket
The Hundred Can Help Revolutionise Women’s Cricket And Inspire...
The long-awaited The Hundred competition is set to revolutionise cricket and will finally kick off this [ ... ]
cricket
Should Test Cricket Lose The Toss After India's Battering Of...
England have nobody to blame but themselves for the manner of their 317-run mauling at the hands of [ ... ]
cricket
Sidebottom Hails ''Fantastic'' Root And ''Stunning'' Anderson...
Ryan Sidebottom has heaped praise on both Jimmy Anderson and captain Joe Root following England’s [ ... ]
cricket
Fantastic Jimmy Anderson Wraps Up A Statement England Win In...
England wrapped up a dominant First Test win over India on Tuesday, with Jimmy Anderson collecting three [ ... ]
cricket
100 Up! Joe Root's Timely Form Could Be The Difference For England...
He is the baby-faced batsman who slotted into England’s line-up in India in 2012-13 and immediately [ ... ]