These are pretty horrendous times to follow Yorkshire cricket. The racism scandal which has rocked not only the club but the entire sport shows no signs of abating, with the findings of the investigation concerning Azeem Rafiq potentially just the beginning of the lengthy rap sheet.

At least 10 current or former Yorkshire players are believed to have been named in the investigation, and when Rafiq speaks to MPs in the coming weeks there are set to be further revelations regarding the culture of racism which was apparently rife during the 30-year-old’s spell with YCCC between 2008 and 2018.

Fans have taken to the streets outside Headingley in recent days to protest Yorkshire’s current stance, with chief executive Mark Arthur and director of cricket Martyn Moxon so far refusing to follow chairman Roger Hutton in resigning their posts.

And in the wake of ex-Pakistan bowler Rana Naved ul-Hasan telling ITV News that he was a witness to racist language used by former Yorkshire and England captain Michael Vaughan during his time at Headingley, the club and the England and Wales Cricket Board (ECB) could be set to come under further fire as the scandal deepens.

Yorkshire have moved to appoint Lord Kamlesh Patel as their new chairman, but more will have to be done to appease those who believe the sport to have been almost irreparably damaged by the findings of the Rafiq investigation.

Azeem Rafiq
@AzeemRafiq30
Some thoughts below 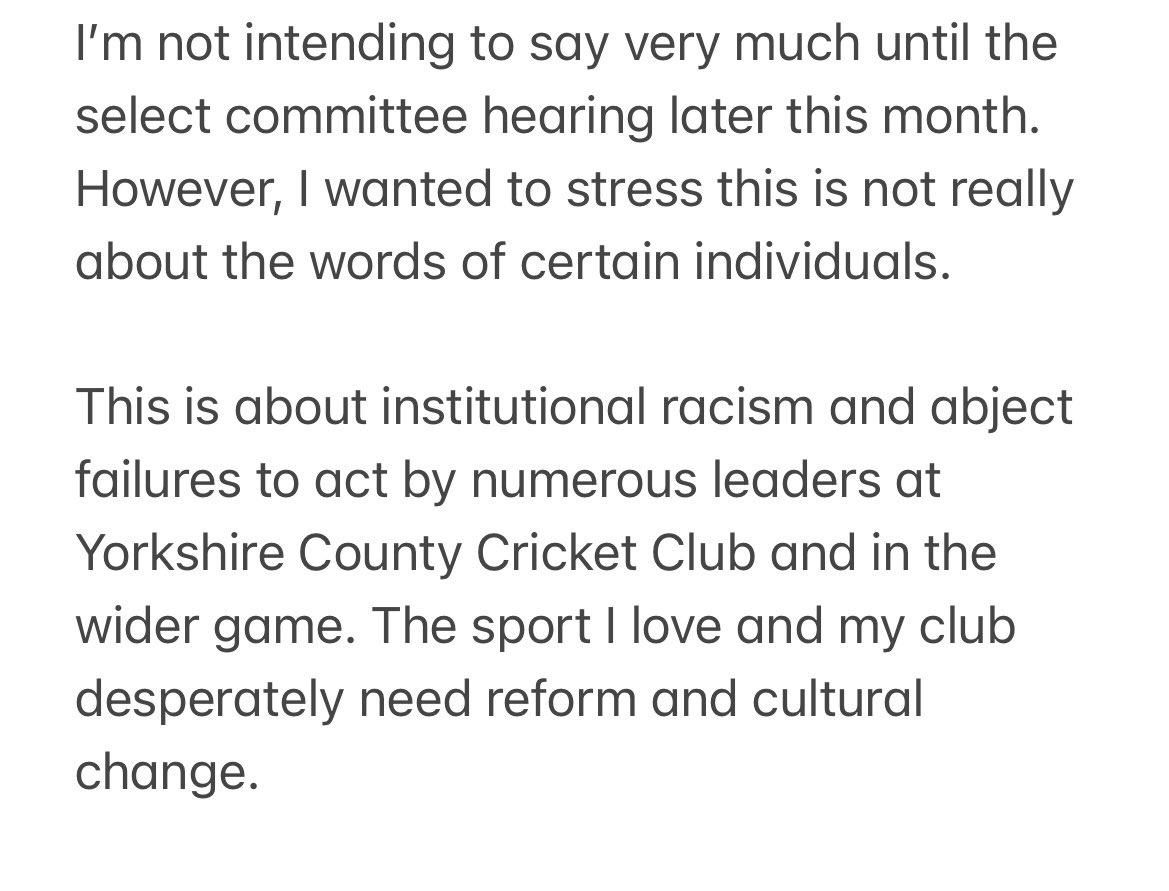 Rafiq revealed in September 2020 that he had come close to committing suicide during his time at Yorkshire, insisting there was “institutional racism” in the county dressing room, with Hutton immediately launching a formal investigation.

The former England under-19s captain later revealed that non-white players were summarily referred to as “P***s” and “elephant washers”, and also filed a legal claim against his former employers under the Equality Act.

Yorkshire released a summarised version of an independent report and apologised for what they found to be “racial harassment and bullying” against Rafiq, yet less than 20 per cent of the player’s allegations were upheld and as a result Yorkshire refused to accept the claim of institutional racism.

Then last week ESPNCricinfo reported that Yorkshire had claimed that incidents in which the word “P**i” was used were nothing more than acts of “friendly banter”, and former England player Gary Ballance spoke publicly about having used a racial slur against Rafiq but only as part of conversations with “things said privately to each other which were not acceptable”.

Yorkshire were suspended from hosting international fixtures amid the fallout, while Ballance was indefinitely suspended from England call-ups, and the club began to lose sponsors and partners at a rapid rate. Emerald Group Publishing, Nike, Anchor Butter, Yorkshire Tea, Tetley’s Beer and more pulled out of their existing deals with the club, and yet there was more to come as Rana Naved’s revelations led to Vaughan being stood down from his BBC Radio show despite a very public denial from the 47-year-old that he had never used such language.

“It is a very wrong word for any Asian player,” Naved said of Vaughan’s alleged use of the P-word. “So that is racism, I feel that.” 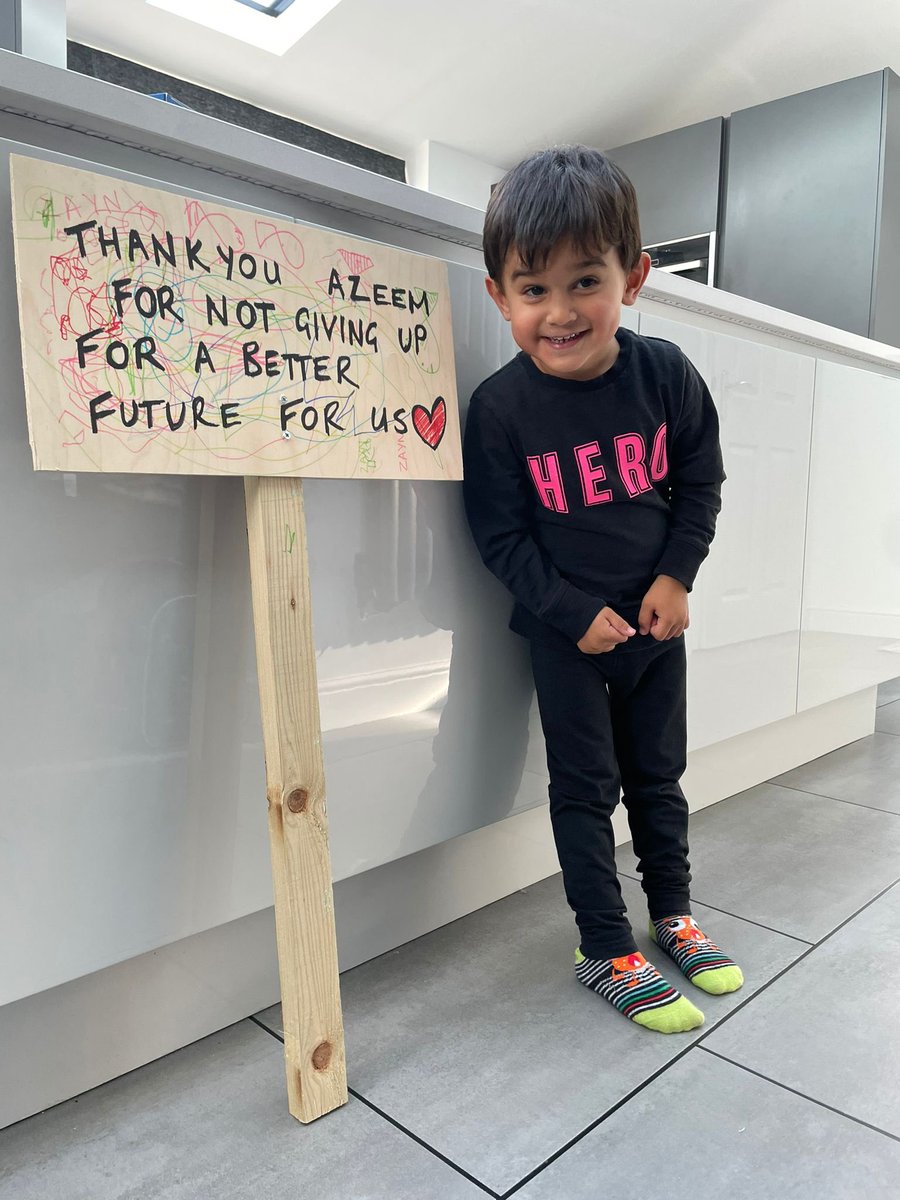 This is a matter which feels like it has a long, long way to run. Azeem Rafiq’s discussions with the Department for Culture, Media and Sport's select committee are bound to publicise further revelations. Some former Yorkshire officials have already claimed that other counties have the same problem with racism inherent in their ranks, while an unnamed player has been said to have made further accusations against YCCC.

Whatever the rest of the fallout, Yorkshire clearly has many years of hard work ahead. Nobody will consider the club a credible organisation for as long as executives, staff and players who have propagated, or been party to, such a culture of racial bullying remain in post. Claims that Yorkshire sought, but were refused, the help of the ECB over problems with racism also need to be thoroughly investigated.

Cricket has been knocked sideways by the way Yorkshire have handled this episode, but now is the time for the club and the sport to prove it has learned a lesson. Without full disclosure, acceptance and consequences over what has taken place, there will simply never be a just conclusion. And that is the least Azeem Rafiq and the whole British Asian community deserve.

x
Suggested Searches:
Manchester United
Liverpool
Manchester City
Marcus Rashford
Premier League
More
cricket
Cummins Takes Australia Captaincy Just When Cricket Needs Leadership...
As expected, Pat Cummins is the new Australia Test cricket captain ahead of the forthcoming Ashes series. [ ... ]
cricket
Cricket Faces A Long Road Back After Azeem Rafiq Revelations
To call the revelations that have rocked cricket over the last few weeks ‘damaging’ would [ ... ]
cricket
The Ashes Preview: England Relishing Battle With Australia Down...
Sport gets the juices flowing – and none more so than a mouth-watering Ashes series to savour. [ ... ]
cricket
Road To Redemption: Australian Cricket Can Finally Put 'Sandpapergate'...
Australian cricket was brought to its knees by the now infamous ball-tampering scandal.  ‘Sandpapergate’, [ ... ]
cricket
Mitchell Marsh Inspires As Australia Beat New Zealand To Clinch...
Mitchell Marsh delivered the performance of his life to secure Australia's first ever T20 World [ ... ]
cricket
England Dumped Out Of T20 World Cup By New Zealand As Mitchell...
England suffered a gut-wrenching defeat in their World Cup semi-final as New Zealand, inspired by Daryl [ ... ]
cricket
England's Semi-Final Vs New Zealand To Be Decided ''By The Barest...
“England have won the World Cup, by the barest of margins! By the barest of margins!” Two [ ... ]
cricket
Brilliant Buttler Ton Moves England Tantalisingly Close To Men's...
A sensational century from Jos Buttler inspired England to a vital 26-run victory over Sri Lanka in [ ... ]
cricket
New Zealand Hammering Leaves India Heading For Early Exit From...
India are already on the verge of elimination from the Men’s T20 World Cup thanks to a humbling [ ... ]
cricket
England Are The Early Pace Setters At T20 World Cup After Bangladesh...
It is still early days at the T20 World Cup, but from what we have seen so far, Eoin Morgan’s [ ... ]
cricket
Influential Ben Stokes Is Back - But Can He Inspire England...
If there is one man that can save England Down Under, it is Ben Stokes. He is the beating heart of Joe [ ... ]
cricket
Double King Or Old News? England & Morgan Face Moment Of Truth...
Oh, how quickly sport moves. As England approach their first major white-ball tournament since that [ ... ]
cricket
Moeen Ali Retires From Test Cricket Having Broken Down Barriers...
After 64 matches, five centuries and 195 wickets, Moeen Ali has called time on his England Test career [ ... ]
cricket
England's All Too Predictable Batting Collapse Costs Them Test...
Another inevitable England batting collapse. On a strangely sunny Monday morning in early September, [ ... ]
cricket
Consistency Now Key As England Look To Repeat Headingley Heroics
“Just when I thought I was out, they pull me back in…” There was a moment there where [ ... ]
cricket
England's New Look Line-Up Already On The Back Foot As India...
In the week that saw Lord Ian Botham appointed trade envoy to Australia, England’s current crop [ ... ]
cricket
Without Everyone Playing Their Part, England's Cricketing Struggles...
Former England Test cricket bowler Ryan Sidebottom believes England can enjoy success again if the whole [ ... ]
cricket
England's Batting Line-Up Is Shoddy, But The Lack Of Depth Is...
An Englishman with a bat in front of three sticks of wood has now become as nervy of a spectacle as [ ... ]
cricket
England's Final Day Defeat To India Was Inevitable, And Root...
A disaster. A shambles. An embarrassment. Several words have been used to describe England’s fifth [ ... ]
cricket
Rain And Root Deny India, But England Can't Keep Relying On...
In the end, the rain finished off the job Joe Root had started. The First Test between England and India [ ... ]
cricket
The Greatest Test Match: England's 2005 Edgbaston Ashes Win...
It felt like the peak of Test cricket at the time. Arguably, it remains the greatest ever game in the [ ... ]
cricket
Time For Joe Root's England To Find Some Consistency - Sidebottom
Former England Test bowler Ryan Sidebottom insists that Joe Root’s side must turn in a stirring [ ... ]
cricket
Ben Stokes' Break From Cricket Highlights The Strides Made On...
It is a truly wonderful thing that Ben Stokes will not be in England’s Test squad to face India [ ... ]
cricket
Ryan Sidebottom: England's T20 Hopes Have Received A Huge Boost...
We’ve seen the likes of Jonny Bairstow, Ben Duckett and James Vince flashing the bat to great [ ... ]
cricket
Ryan Sidebottom: The Hundred Is ''Off To A Great Start'' After...
Ryan Sidebottom believes cricket's divisive new tournament 'The Hundred' proved [ ... ]
cricket
Ryan Sidebottom: Why The Hundred Is A Game Changer For Women's...
For women in particular, The Hundred is huge. Ahead of the first ball being bowled it has had its doubters [ ... ]
cricket
England Can Dream Of Another World Cup Win, Two Years On From...
“By the barest of all margins.” The inimitable Ian Smith couldn’t have summed it up [ ... ]
cricket
The Newcomers Looking To Help Fire England To An ODI Win Against...
An inexperienced England are facing a huge test as they have been forced to name a brand new 18-man [ ... ]
cricket
Perennial Finalists New Zealand Finally Come Good To Win World...
New Zealand finally got the job done. In 2015 they were the entertainers of the tournament at the Cricket [ ... ]
cricket
Sophia Dunkley Is England's Newest Cricketing Icon That Can...
Sophia Dunkley is a history maker. She became the first black woman to play Test cricket for England’s [ ... ]