It was like watching a bad movie, except this was one you’d seen 10 times before and had hoped that it might magically deliver a different ending this time.

Scotland’s oh-so-familiar travails in major tournaments are long and varied, and at Hampden Park on Tuesday their pre-match promise gave way to that same old pain as Croatia won 3-1 to knock Steve Clarke’s side out of Euro 2020.

In their eight World Cups and two previous appearances at European Championships, Scotland had always conspired to exit at the group stage. This time could have been different. They knew pre-match that a win would guarantee them a spot in the uncharted territory of the knockout phase, but Luka Modric’s second-half stunner and an assist for Ivan Perisic’s late clincher ensured this was the same old story.

There was no Patrick Kluivert goal to take things out of their hands this time as at Euro 96, though neither was it the lifeless repeat of their 0-0 draw against 10-man Uruguay at Mexico 86. Instead this was a decent effort that was lacking in quality against World Cup finalists who finally came to the party.

Scotland had started well, and when John McGinn sent over a floated left-wing cross in the opening minutes, Che Adams just failed to reach the ball with his right foot when he might have been better advised to throw himself into a header. 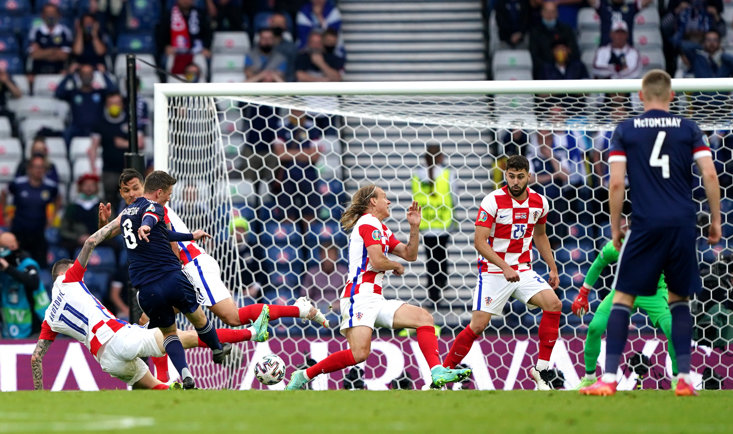 By midway through the first half Croatia were ahead, Ivan Perisic guiding a back-post header down for Nikola Vlasic to sweep home from 12 yards. At 1-0, there appeared little chance of a revival. Croatia finally looked more like their 2018 version rather than the lifeless outfit which had shown up against England and the Czech Republic. Meanwhile, Hampden had had the life sucked out of it.

But then shortly before the break Scotland attacked through Stuart Armstrong, Croatia twice failed to clear the danger and Callum McGregor fired home an arrow of a low shot from 20 yards. Suddenly, the stadium had been brought to life again, Scotland were buzzing and the dream of making it 11th time lucky was alive once more.

There were chances to take the lead in the second half, most notably when McGinn attacked a cross at the far post but went with his left foot instead of his right and skewed his effort wide. It was a moment the home side would come to rue.

After a period during which it felt like Croatia were getting the upper hand, the ball dropped for Modric 20 yards from goal. The Real Madrid star responded with a sumptuous shot with the outside of his right boot which left David Marshall with absolutely no chance.

To add insult to injury, Modric then teed up Perisic from the left wing as the Inter star flicked home a headed third to well and truly expunge any modicum of hope Hampden had for a comeback. This was the night that Croatia finally played like Croatia, while for Scotland it was the same experience that 10 Scotland teams of years past have had to come to terms with.

There is hope for Scotland in the progress this side has made and the youngsters they have, all of whom will benefit from having played in or seen this tournament. There is new belief, of sorts, but for the next few days there will also be that same old overwhelming pain.