Football
News
We look at the stats and facts that make the Norwegian's £51 million transfer fee look like an absolute bargain
Kris Voakes
12:35, 01 Jun 2022

Judging by their success in recent years, Manchester City are about the only club in England that don’t need to worry too much about strengthening their playing roster right now. Four Premier League titles in five seasons, along with an FA Cup win, four EFL Cup successes and annual trips to the latter stages of the Uefa Champions League says plenty about the ability of Pep Guardiola’s squad to fight on all fronts.

So the official announcement of Erling Haaland’s arrival from Borussia Dortmund on Wednesday will have been met with sighs of resignation all around the English game as City’s dominance threatens to get stronger rather than weaker in the years to come.

Still only 21, Haaland is a phenomenon in the making. Since rising to prominence with Red Bull Salzburg in the latter half of 2019, the Norwegian has tallied some incredible numbers in front of goal. Looking at the below facts and stats, there’s no wonder some people have labelled his £51 million transfer fee an absolute bargain.

·  Scored a first-half hat-trick on his Champions League debut for Salzburg against Genk in 2019, eventually outscoring nine clubs in the group stage by netting eight times.

·  Hit a hat-trick in his Dortmund debut against Augsburg and went on to score eight goals in his first four games for BVB.

·  Struck two or more goals in a game 14 times in 2020-21 season alone, including a treble for Norway against Romania and a four-goal haul in a 5-2 Dortmund win against Hertha Berlin 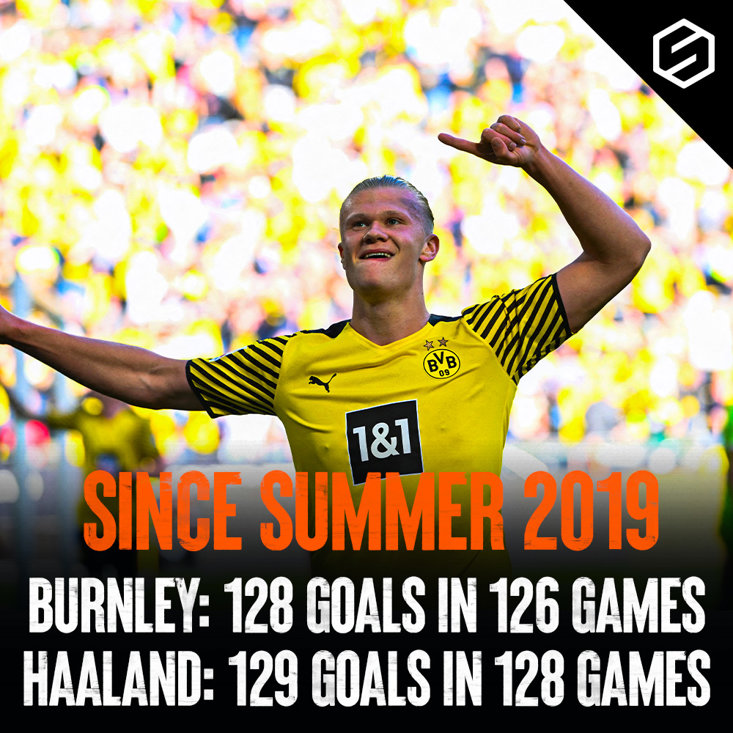 ·  Haaland has totalled 129 goals in 128 games in all competitions for club and country since the summer of 2019. Over the same time span, Burnley have scored 128 in 126 matches and Norwich City 124 in 122 league games even accounting for their 2021 Championship title-winning campaign

·  He has a career tally of 1.31 goals and assists per 90 minutes at club level, with that figure rising to 1.6 in the Champions League