Only three other clubs now have a better record of completing the route to the European Cup final as Liverpool enter their ninth this weekend against their seventh different opponent; Tottenham Hotspur, in the first all-English final in 11 years.

Expectations are high for a Liverpool side that has been delicately assembled by Jürgen Klopp, as they bid to go one better than last year, when they reached their first Champions League final in over a decade.

This season, Liverpool are looking to go someway to eradicate not only that defeat to Real Madrid but also the disappointment of being agonizingly beaten by a single point to the 2018/19 Premier League title by Manchester City, to once again assert themselves as the most successful British team in European competition history.

Klopp’s record in finals, however, is well-documented, with the German having lost six of his last seven with both Liverpool and - preceding that - Borussia Dortmund.

However, the Liverpool gaffer is buoyant; "I have never been part of a final with a better team than this," Klopp said (via BBC), and after an exceptional season when they’ve been far and away one of the two best teams domestically and have claimed the scalps of Barcelona and Bayern Munich, the possibility of Liverpool making it six European Cups - moving back up to third ahead of both of those aforementioned teams in the all-time rankings - is a distinct possibility.

Klopp will have the extra incentive of avoiding the ignominy of becoming only the second manager  - after Marcello Lippi - to lose three Champions League finals. Impressively, the manager has reached at least one final in every single season in the past eight, bar one, though the record doesn’t make for pleasant reading:

The first - and so far only - all-German Champions League final, Bayern Munich bounced back from being beaten in the previous two Bundesliga campaigns by Klopp’s Dortmund side to complete the continental treble in Jupp Heynckes’ last season.

At Wembley Stadium, it took an hour for the deadlock to break, with Munich’s Mario Manduzkic taking advantage of Arjen Robben’s tenacity. Though Ilkay Gundogan equalled for the BVB from the spot after Dante brought down Marco Reus, it was Man of the Match Robben to take the glory in the dying minutes of the 90.

Football on BT Sport
@btsportfootball
ðŸ“† OTD in 2013...
Bayern saw off Dortmund at Wembley to be crowned champions of Europe ðŸ‡©ðŸ‡ªðŸ‘‘
Jurgen Klopp has managed a team in the last two Champions League finals not to feature Lionel Messi or Cristiano Ronaldo (2013 and 2019). 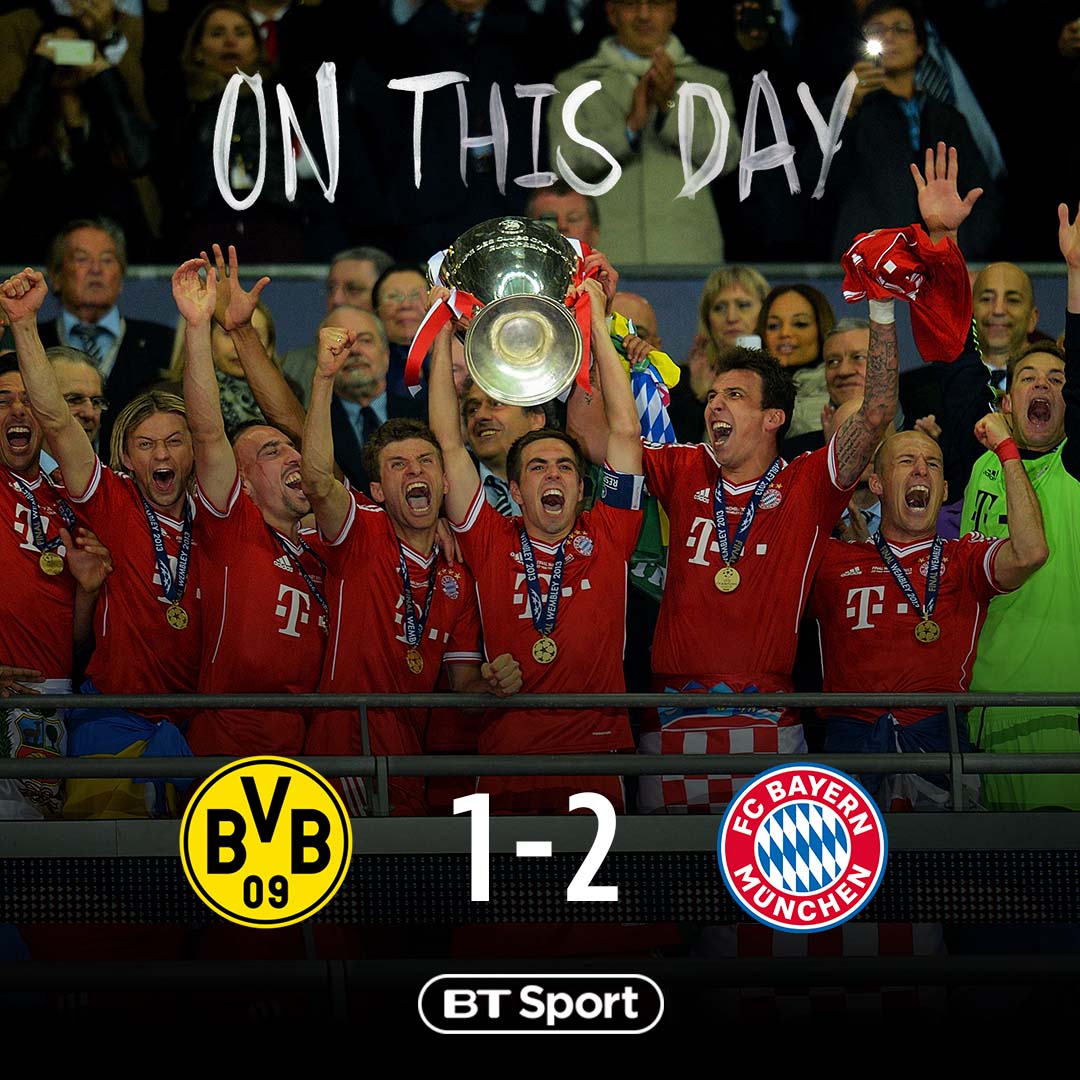 piled on the misery in the capital to increase their haul to 17 German Cups. Dortmund had won the competition two years earlier over Munich for a domestic double, with a 5-2 mauling at the Olympiastadion, with Robert Lewandowski bagging a hattrick.

In 2014, it was a valedictory defeat for the Polish striker with Dortmund, having already agreed to join Bayern in the off-season. Munich won 2-0 courtesy of Robben and Thomas Miller in extra-time. It was the first of three back-to-back German Cup finals Dortmund would reach, all ending in defeat.

Klopp would depart the club following this loss, after seven years at the helm of Dortmund. Pierre-Emerick Aubaymeyang had given his side the advantage extremely early on in the game after just five minutes, before Wolfsburg struck back with three more first-half goals for their first ever victory in the competition.

A goal for each side from two Brazilians, Philippe Coutinho and Fernandinho, and then a goalless extra time, allowed Manchester City’s shot-stopper Willy Caballero to step up and be the hero after the tie went to penalties.

It was a different story for Liverpool’s man between the sticks, Simon Mignolet, who was at fault for City’s opener; a goalkeeping issue that would continue to rear its head and prove detrimental for the Reds in the near future...

A little over three months after losing the League Cup, Liverpool went into the Europa League Final as favourites - particularly as they had seen off Man Utd and Dortmund along the way to St. Jakob-Park in Basel. Again, they took the lead but were ultimately beaten 3-1 by a Sevilla side, led to their third straight trophy by Unai Emery.

A replay of Liverpool’s 1981 meeting with Real Madrid, this was a real game of heroes and villains in Kiev; Liverpool’s Premier League Golden Boot winner Mo Salah was carted off early thanks to Sergio Ramos’ b*stardry, whilst Gareth Bale took advantage of the calamity that was Loris Karius. It was heartbreak for the travelling Reds in the Ukraine, but will they be redeemed this year?

More
football
The Numbers That Prove The Women’s Super League Is The Best...
“We can say hand on heart we are the best league because we really are. All the best players want [ ... ]
football
Podcast Review - The Glenn Hoddle Footy Show
A quarter of a century since he last kicked a football professionally, and 14 years after his last coaching [ ... ]
football
Book Review - How To Run A Football Club: The Story Of Our National...
With an extended lockdown threatening the existence of a substantial portion of the United Kingdom’s [ ... ]
football
Thiago, Kalvin Phillips And The Premier League ‘Quarterbacks’...
Thanks for reaching out. You do the math. My bad. Americanisms, you gotta love ‘em. We’ve [ ... ]
football
Wayne Barton's Book On David Beckham Highlights Golden Balls'...
When historians look back at the sports scene at the turn of the millennium, there will most certainly [ ... ]
football
Rosé For Rodriguez, A Bollocking For Bilic, Five Stories You...
Managers can’t manage masks, fans are finding new ways to hail their heroes, and Jurgen Klopp [ ... ]
football
The Covid Defying Smart Helmet That Could Help Unite Football...
After the longest season in history, a mercifully short reprieve for players to catch their breath has [ ... ]
football
Get An Edge On Your Rivals This Season With The Fantasy Premier...
What are you this year? ‘Lallanas in Pyjamas’? ‘Murder on Zidane's Floor’? [ ... ]
football
Neymar's Handbags, Shy Guy Jose, And Other Football Stories...
Just like that, we’re back in the room. There’s new rules (on and off the pitch), and renewed [ ... ]
football
Celebrating The Return Of The Premier League With Its Best Ever...
After the shortest pre-season on record, even if it has felt to some of us like the longest ever, Premier [ ... ]
football
Lionel Messi Teams Up With Budweiser To Inspire Tomorrow's Footballing...
Lionel Messi, for all you do, this Bud’s for you. We’ve got to admit, it’s got a certain [ ... ]
football
From 007 to 46 Million Followers, Ten Facts You Never Knew About...
Everton finally announced the signing of James Rodriguez on Monday evening, after the Colombian superstar [ ... ]
football
The New Liverpool Book With A Groundbreaking View Of The Shankly...
September should always hold a special place in the hearts and minds of Liverpool Football Club and [ ... ]
football
The Questions We Want Answering After Watching All Or Nothing:...
“You have to be a bunch of bastards!” Annnd with that, we’re hooked. The last day [ ... ]
football
Football History Comes To Life With The Guardian’s Forgotten...
For much of 2020, the general consensus amongst the sporting community has seemingly been the desire [ ... ]
football
Book Review - Close Quarters: An Extraordinary Season On The...
He has been called the luckiest journalist in the world. When award-winning sportswriter Neil Harman [ ... ]
football
Work Out Like A Chelsea Player With The Most Advanced Football...
It claims to be the most advanced football training experience ever - imagine being trained by world-class [ ... ]
football
Blue Moon, Bubbles & Delilah - How Football Clubs Got Their...
Liverpool and Celtic fans both enjoy spine-tingling versions of ‘You’ll Never Walk Alone’ [ ... ]
football
The Lionesses Who Helped Lead The Charge In Lyon's Coupe De...
For the second time in less than a fortnight, Olympique Lyonnais and Paris Saint-Germain faced off in [ ... ]
football
Five Premier League New Boys That Are Set To Take Next Season...
A swift summer transfer window is on the cards, with just 48 days between Premier League seasons due [ ... ]
football
Bobby Robson And The Most Glittering Chapter In Ipswich Town’s...
Few in Ipswich could have predicted what was to come when Bobby Robson replaced Bill McGarry at the [ ... ]
football
How Tearing Down The Twin Towers Destroyed The Magic Of Wembley
On July 26, 1998, plans for a new Wembley were revealed to the world, promising a national stadium [ ... ]
football
Here's To The 2019/20 Premier League Season: Five Moments That...
It all began on August 9, 2019. 353 days later, a fortnight shy of a full entire year, the 28th Premier [ ... ]
football
Why Figo To Madrid Is Still Football's Most Controversial Transfer...
We’ve had Neymar, Sol Campbell and Carlos Tevez but on this day in 2000, Luis Figo completed the [ ... ]
football
Remembering Laurie Cunningham: The Football Pioneer Whose Legacy...
In 2016 the English Heritage scheme erected a blue plaque in Stroud Green, North London to celebrate [ ... ]
football
Book Review - King Eric: Portrait Of The Artist Who Changed...
Leeds. Irwin. £1million. Title. Double. Palace. Kick. Ban. Seagulls. Return. Liverpool. Double. [ ... ]
football
Replacing Rapinoe And Morgan? The Ladies Who Can Light Up The...
Write off 2020. The best thing about it is remembering how good 2019 actually was. One of the undeniable [ ... ]
football
Wembley Woe: When England Lost To Germany At Euro ‘96
In the summer of 1990 England tasted their first ever penalty shootout heartbreak when they went out [ ... ]
football
Get Ready For A Nostalgia-Fest With Italia '90 Podcast Vincerà!
Hosted by Mark Godfrey and running from June 8th to July 8th, Vincerà! is a 24-part podcast series [ ... ]
football
Harry's Heroes, Vinnie Jones And Revenge At The Battle Of San...
When Vinnie Jones started crunching San Marino players left, right and centre, it was clear the friendly [ ... ]