In 2004 Sepp Blatter, the then president of football’s world governing body, said:

"Let the women play in more feminine clothes like they do in volleyball,” in quotes via The Guardian.

"They could, for example, have tighter shorts. Female players are pretty, if you excuse me for saying so, and they already have some different rules to men - such as playing with a lighter ball. That decision was taken to create a more female aesthetic, so why not do it in fashion?"

Now, fast-forward 15 years, and the eighth edition of the Women’s World Cup takes centre stage this summer as 24 countries do battle in France. Participation, attendance and viewing figures continue to rise as the game’s current catalogue of stars, including Brazil's Marta, Aussie Sam Kerr, American Lindsey Horan, and England’s very own Lucy Bronze bid to conjure up moments of magic, and in turn elevate the game to new heights over the course of the next month.

Below we take a look at three pioneers of the women’s game in Britain, women that overcame huge hurdles to instigate change and inspire future generations through their remarkable achievements on-and-off the pitch.

Goalscoring phenomenon Lily Parr hit the headlines this week after she became the first ever female player to be commemorated with a statue, unveiled at the National Football Museum in Manchester.

Parr, widely regarded as the first superstar of the women’s game, enjoyed a stunning goal-drenched career spanning 32 years, during which she challenged and changed preconceived perceptions, broke barriers, and mesmerised thousands with her unique talent.

Parr started her career at St Helens Ladies, before she was poached from the dominant team of the time - Dick, Kerr’s Ladies who later became Preston Ladies - and went on to blast home 980 goals in 833 appearances, 43 of which were scored at the age of just 14.

In 1921 the English FA - ran by men - inexplicably banned women’s football. A brutal ban that lasted for a staggering 50 years, while it took a further 37 years for the FA to issue an apology. Parr continued to play on village greens, while she toured America with Dick, Kerr Ladies.

She was part of the first recognised international women’s football match against France - a 4-0 win in front of 15,000 - and during her time playing for Dick, Kerr’s Ladies a whopping 53,000 spectators flocked to see Parr and her teammates at Goodison Park. To put that figure in perspective, Everton men’s average home attendance last season was 38,780.

Six foot Parr was openly gay, rare at this time period, her pay was supplemented in cigarettes and it’s reported that the ferocity of one of her thundershots even broke a man’s arm. Parr would later train as a nurse, and worked at a mental hospital. 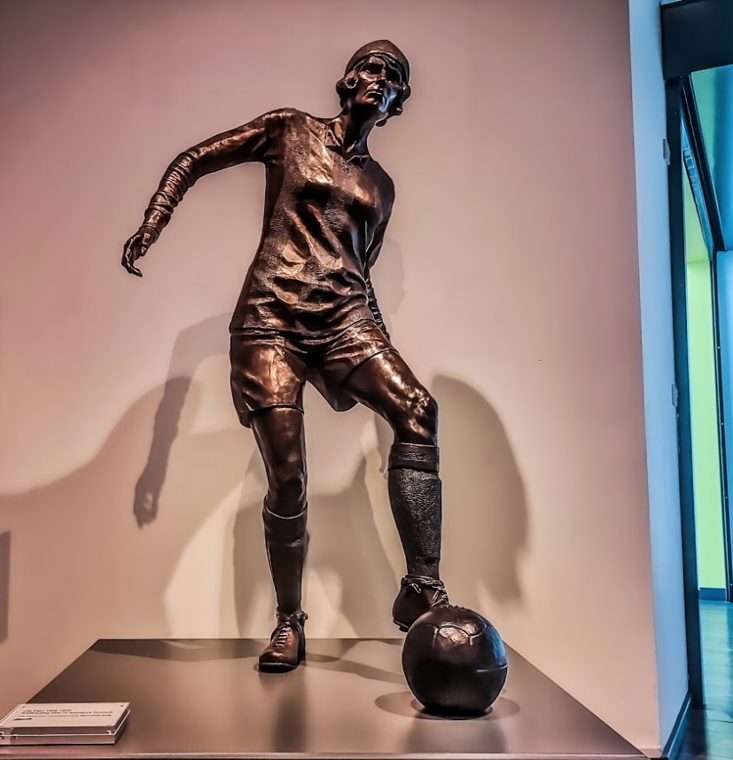 Prior to Lily Parr’s arrival on the scene, two women opened new avenues in 1895 through the establishment of the first ever women’s association football club: British Ladies' Football Club. Lady Florence Dixie was the President, and Nettie J Honeyball - whose real name is believed to be Mary Hutson - was the club captain.

A year before the club’s foundation medical professionals called for women to be banned from football, however Dixie was an “ardent believer in equality between the sexes,” (History Extra) and despite not playing football herself, the passionate sports lover worked tirelessly to organise a series of matches for charity, and there were tours to Scotland, all the while encouraging women to get involved in the sport.

Hope Powell is a true inspiration and groundbreaking figure in the women’s game. When she was 12-years-old rules forbid Powell to play football for her school, but four years later she won her first England cap. Powell went on to play in England’s first ever World Cup, passed her first coaching course at 19, then later became the first ever female England manager - also the first full-time, and non-white boss - a position she held for 15 years between 1998 and 2013.

Powell was the first woman to achieve the Uefa Pro coaching licence, a sizeable moment, and she oversaw the introduction of centralised contracts so players could focus on football full-time. After leaving her post at England Powell worked for Uefa, Fifa and the Professional Footballers’ Association, and since she has been managing the Brighton women’s team.