It’s not so much Super Sunday as ‘Solo Sunday’ in the Premier League this week as Leicester City welcome Newcastle United to the King Power Stadium, with the Foxes heading into the game as one of the top flight’s form teams.

Brendan Rodgers’ side began the weekend in third, albeit by virtue of superior goal difference to Arsenal and West Ham United, with only last year’s one-two of Manchester City and Liverpool ahead of them. Newcastle currently languish above the relegation zone as the Rafael Benitez mourning continues.

For Leicester, it’s all positive.

It’s a dynamic, attractive squad prepared to go tête à tête, or more appropriately toe to toe, with any of the EPL’s behemoths. A top-six berth at the conclusion of the 2019/20 season looks a real possibility based on current evidence.

There are echoes of Mauricio Pochettino’s Tottenham Hotspur in the side but this Leicester City under former Liverpool and Celtic boss Rodgers, has a clear identity. It is an approach which has a clear and solid infrastructure based on honing youthful talents, encouraged by a productive academy set-up that stands up with the best England has to offer.

The academy’s mandate, provided on the club’s website, reads: “Leicester City Football Club’s Academy is committed in its endeavour to identify talented young players and to provide quality coaching, combined with a relevant education package in order to produce young men of integrity with the ability to play professional football at Premier League and Football League level.

“Through our player-centred focus and the implementation of our ‘Committed to Excellence’ technical programme, we are fully committed to providing a top-quality experience to all of our players aged between eight and 21-years-old, in order to provide the best chance of eventually making the First Team at Leicester City.

First-teamer Hamza Choudhury is the latest in a long line of esteemed graduates, a strong vein that stems back beyond even the days of legendary former England goalkeeper Peter Shilton. The 21-year-old midfielder from Loughborough is still being eased into Rodgers’ set-up but recently made the most of a six-minute cameo against Spurs with an assist for James Maddison’s match-winner.

That was a game which demonstrated to many Leicester’s current standing as a challenger to the Premier League elite. At 22, Ben Chilwell is a fellow Fox who has made the grade from academy product to the first team, with a legitimate claim to be the best left-back in the league and eight international appearances now under his belt.

Leicester City
@LCFC
@jamesjustin98 @Gerry_Taggart @DanBatesTV "Training with the group day in, day out is improving me as a player. I've just got to keep working hard and keep level-headed." ⚖
@JamesJustin98 🦊 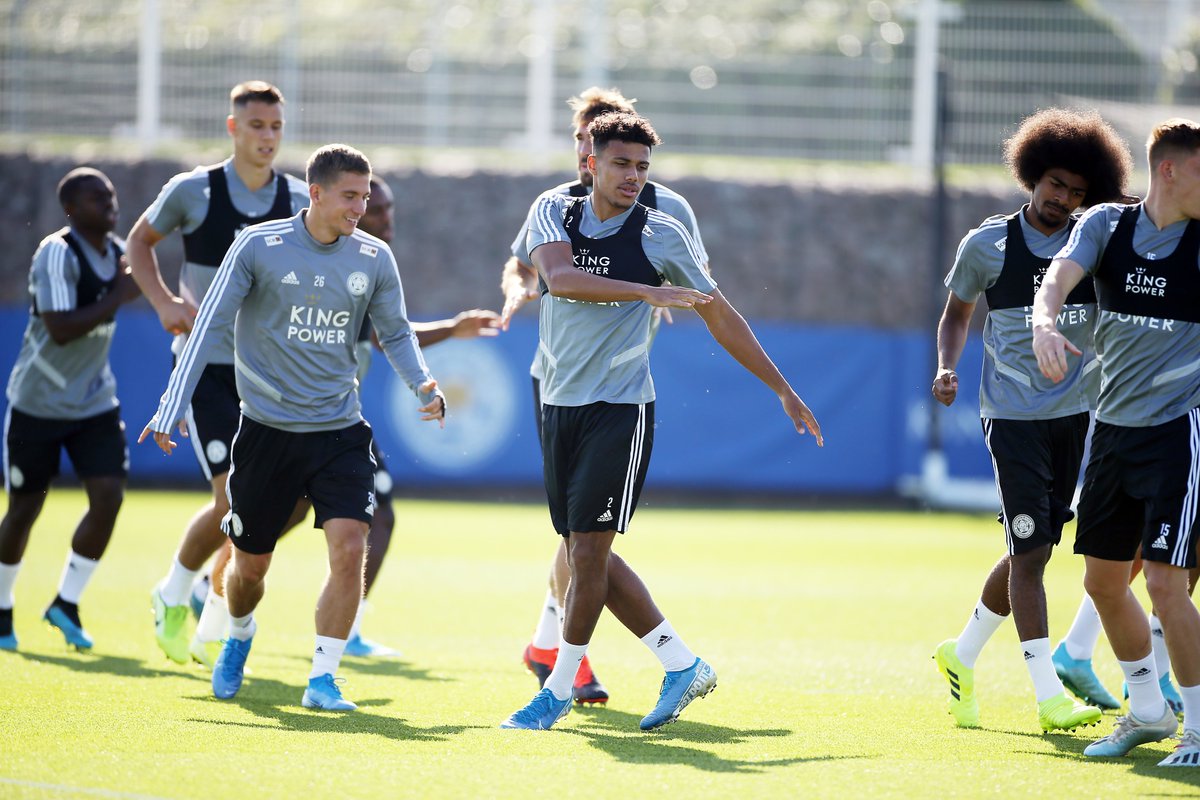 This season Leicester can boast the eighth-youngest squad - at an average of 26.1 years old - in the Premier League, and that is with the joint-second largest number of players available.

The youngest XI they have fielded this season was in the 1-0 defeat to Manchester United at Old Trafford, with an average age of 25.7 years old; with nobody across the midfield quintet older than 23.

The 32-year-old stalwarts at opposite ends of the pitch in goalkeeper Kaspar Schmeichel and evergreen talisman Jamie Vardy increase the mean number but also help to demonstrate the tried-and-tested method of pairing experience with youthful energy which permeates this Leicester side. Jonny Evans (31) supports the Harry Maguire-shoe-filling Çağlar Söyüncü (23), while Vardy is usually flanked up-top by James Maddison and Demarai Gray, both in their early twenties.

Securing Youri Tielemans on a permanent deal from AS Monaco still has to be considered a credential-enforcing coup, even if the Belgian hasn’t exactly hit the ground running for the new campaign. Tielemans - 22 - enjoyed an eye-catching second half of the season on loan from Les Monégasques, leading him to become a familiar face heading into the current campaign.

The previous summer had seen the attention-grabbing arrival from Norwich City of the exciting Maddison, a player whose on-pitch assurance belies his tender years. He is becoming widely-accepted as one of the most exciting young footballers currently in the Premier League.

It’s still severely early days to predict Leicester’s ultimate position - they still only have a 50% win ratio so far - but placing faith in youth is rewarding the club, fans and neutral observers alike.

Excitement for what this young team can do is rightly becoming heightened.