Utter the name Paolo Rossi and there is one game everybody immediately thinks of. It remains one of the greatest World Cup matches of all time, and Rossi’s wonderful hat-trick continues to be rightly heralded as one of the great virtuoso performances on the global stage.

Even 40 years on, there has arguably never been a match – nor a story – like it in any World Cup. Rossi went from disgraced and suspended match-fixer to underperforming striker before becoming a hat-trick hero for Italy against Brazil in a crucial second-round group win. He went on to score six in a week as the Azzurri lifted a third World Cup.

It truly was one of the most astonishing turnarounds in football history.

·  Why City takeover has lost Palermo at least one fan

Rossi was one of 20 players implicated in the Totonero betting scandal of 1980 and while he always maintained his innocence, he was banned for three years for his involvement. The suspension ruled him out of Euro 80 and should have barred him from the 1982 World Cup too, but, after Juventus resigned him one year into his ban, the authorities reduced his exile by 12 months to make him available for selection in the finals in Spain.

He didn’t start the finals particularly well, and perhaps it was to be expected given his lack of football over the previous two years. The Azzurri scored only twice in three draws and Rossi’s lack of firepower had many calling for head coach Enzo Bearzot to drop him for the fixtures against Argentina and Brazil in the second group stage. But Italy beat the reigning champions 2-1 and Rossi, despite again failing to find the net, was given the nod for the clash with Brazil in Barcelona on July 5. 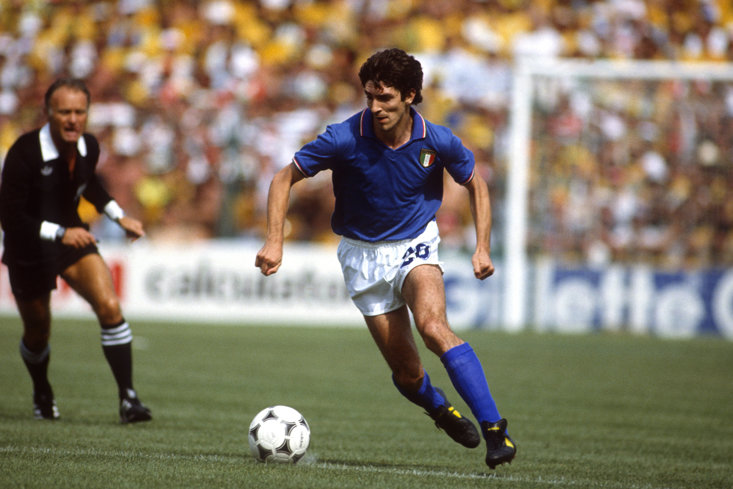 With Brazil only needing a draw to progress to the semi-finals at Italy’s expense, it was imperative that the Italians took the game to the best Brazilian team since Pele’s final tournament in 1970. And so it was that they matched the silky football of their opponents from the start.

Just five minutes in, Rossi was off the mark. From Antonio Cabrini’s cross, the striker ghosted off the back of his marker to head across Waldir Peres into the far corner. The lead didn’t last long, with Socrates equalising seven minutes later, but by the mid-point of the first half Italy were back in front and again it was Rossi finding the mark.

Pouncing on a loose pass from Toninho Cerezo, Rossi charged through and finished with aplomb. From rusty and goal-shy, he was suddenly confident and clinical.

Again, the favourites fought back. Falcao driving home a fantastic shot from the edge of the area from a flowing move which pulled the Italian defence this way and that. But again, Rossi had an answer. From a right-wing corner, Marco Tardelli shot goalwards and Rossi turned to divert the shot home from the six yards out.

An instant classic of a football match had its compelling storyline. From national shame to national hero status, Rossi was the face of one of the great World Cup encounters.

He didn’t stop there. He netted both goals in La Nazionale’s 2-0 semi-final win over Poland and opened the scoring as Italy beat West Germany 3-1 in the final in Madrid. Rossi returned to the Bel Paese as somebody inextricably linked with the events of that tournament. Never again did he reach such heights, but at no point has his name been anything other than revered in Italian football circles since his exploits in Barcelona on this day in 1982.

Call it the Paolo Rossi game, the Italian renaissance, the defeat of one of the greatest international teams of all time. Whatever you want to call it, it was one of the best football matches you could ever wish to see.