Nine years at Old Trafford. Manchester United club captain. He played right-back, left-back, right-wing, left-wing and even up front for Louis van Gaal at one point. This weekend he returns to Manchester with the club where he was transformed from promising young talent into an England international. We are of course talking about the incredibly underrated Ashley Young.

This weekend, he will line-up for Aston Villa against a Manchester United side who have made so much progress under Ole Gunnar Solskjaer, but for all the mega-money signings, Young’s contribution to their cause over the past decade should not be forgotten. For many he was the punchline of a bad joke that was United’s decline.

But Young doesn’t deserve that tagline. At United, he won every single domestic trophy available and even lifted the Europa League. The only trophy missing from his club collection is the Champions League, but he still boasts an impressive haul from his spell in the red of Manchester United.

As one of the league’s liveliest wingers, he certainly deserved his move to United. Sir Alex Ferguson spotted his talent a mile off and although competition for places was fierce, he scored six in his first season and played an important role as United regained the title from Manchester City the following campaign.

Just a month into his spell with his new side he delivered one of his, and the club’s most iconic performances. That 8-2 win over Arsenal is still talked about to this day and Young scored his first goal and second goals for the club in front of the Old Trafford crowd. They were both absolutely superb long-range efforts which showed just how talented he was as a winger during that period.

The United side at the time, featuring Tom Cleverly and Anderson in midfield, and Danny Welbeck up front, was a sign of the times. Sir Alex Ferguson had managed to paper over these obvious weaknesses, but his retirement in 2013 sparked a rough spell for the club so used to dominating English football. 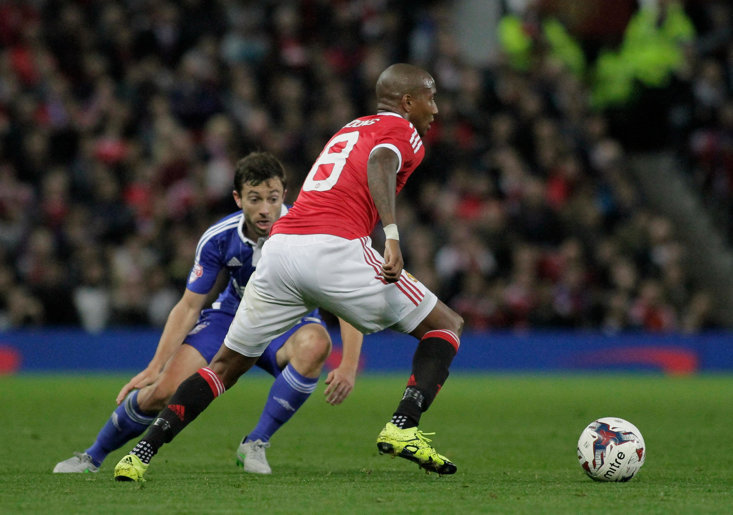 David Moyes’ era was unsuccessful for all involved but Young’s reinvention as a player came under Louis van Gaal. LVG tried him as a wing-back and although the football was often seen as defensive, Young took to his new defensive role dutifully. His versatility and attitude would be the reason he stayed at the club for as long as he did, even if Van Gaal’s experiment of playing him as a sole striker against Spurs drew ferocious backlash from the United following.

An FA Cup win followed under the Dutchman and when Jose Mourinho came in, Young once again proved his worth. Now playing as a standard full-back in a flat back four, with the ability to play on either side, Mourinho had an experienced man that he could completely rely on. Injury robbed him of a Europa League final appearance but he still did his job dutifully for the team.

His displays at the back were so solid that Gareth Southgate even chose him to play at left wing-back in England’s run to the World Cup semi-finals, which ended a five year absence from the national set up for Young.

Under Ole Gunnar Solskjaer he was appointed club captain, a testament to his experience, longevity and service to the club and although his departure, for some critics marked the club taking a step forward, he still had a lot to prove.

At Inter Milan, he became just the third Englishman in history to win the league title, following in the footsteps of the late Jimmy Greaves and Gerry Hitchins. When he returns to Old Trafford with Villa the reception may be mixed. He is still seen as the face of the side that regressed over a difficult decade following Sir Alex Ferguson’s departure, but for United he was a loyal servant who gave them some special moments, and his experience, flexibility and ability to perform under five different managers shouldn’t be overlooked.

Manchester United to beat Aston Villa is 4/11 with Betfred