Do you remember that time Manchester United were battered 6-1 at Burnley and barely anyone noticed? No? Well, it happened, we promise you.

It happened, in fact, on Boxing Day 1963. You know that screenshot that does the rounds at this time every year, with all the big scores on? Well, there’s a ‘Burnley 6-1 Manchester United’ hidden amongst the carnage of the 10-1, 2-8 and more threes, fours, fives and sixes than we can count without removing our socks.

A total of 66 goals were scored on that most ridiculous of days in the First Division, the forerunner to the Premier League of today, with barely any of the scorelines finishing anything close to sensible.

There were notable names starring as part of the drama, too. Long before they became football TV’s greatest-ever double act, Saint and Greavsie were entertaining the fans on the field.

Ian St John scored one of Liverpool’s glut of goals in a 6-1 win over Stoke City at Anfield, while Jimmy Greaves netted twice in a wonderfully daft 4-4 draw for European Cup Winners’ Cup holders Tottenham Hotspur at West Bromwich Albion, with the visitors coming back from 4-2 behind late on.

The highest-scoring game of the day saw a future England manager making his mark against a team reeling from the loss of the reigning Three Lions boss. Ipswich Town headed to Fulham having conceded 58 goals already that season, just 18 months on from winning the title under Alf Ramsey, who by this stage had become England boss ahead of a certain big day at Wembley in 1966.

And at Craven Cottage, Ipswich went down to a Christmas stuffing, losing 10-1 as Graham Leggat grabbed four goals, Bobby Howfield three, and a certain Bobby Robson also got in on the act as Fulham ran riot. 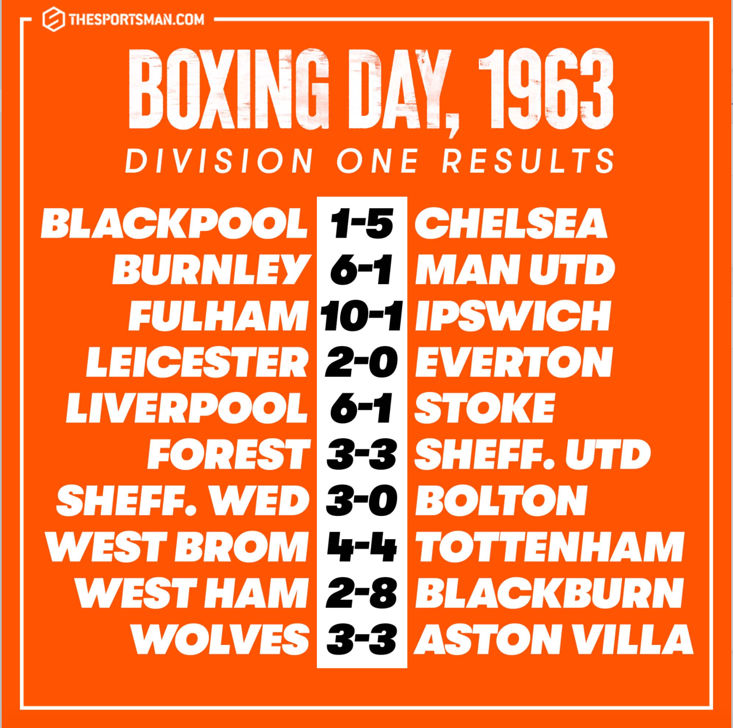 That was by no means the end of the madness. Blackburn Rovers went to West Ham and won 8-2, with Fred Pickering and Andy McEvoy bagging hat-tricks, Wolves and Aston Villa scored six second-half goals between them in a 3-3 draw, Fulham and Sheffield United also drew 3-3 and Terry Venables – another England boss of the future – scored one of Chelsea’s goals in a 5-1 away win against Blackpool.

As for that 6-1 Man United loss, Andy Lochhead scored four for the Clarets as they swept Matt Busby’s FA Cup holders aside. Scottish winger Willie Morgan got Burnley’s other two goals before eventually signing for the Red Devils, but United would get their revenge two days later by winning 5-1 at Old Trafford in the return fixture.

The utter nonsense going on around the top division made Leicester City’s 2-0 win over Everton and Sheffield Wednesday’s 3-0 cruise against Bolton Wanderers seem all so very boring. I mean, what is this clean-sheet voodoo of which you speak?

It was tradition in those days that the return fixtures for all Boxing Day clashes were played on another day over the festive period, but there were a mere 37 goals scored on 28 December, with still no goalless games and only six teams scoring three or more times. Pathetic, eh?

Sixty-six goals, six hat-tricks and even an 8-1 in the Second Division? If only every Christmas was like 1963.