When you thought it couldn’t get worse for Erik ten Hag’s Manchester United, it got worse. A lot worse. A 4-0 loss to Brentford on the face of things is embarrassing, but it was the manner of the performance that left United fans reeling and the manager stunned.

The first half performance was reminiscent of Brazil’s 7-1 World Cup semi-final defeat to Germany. United were pressed, harried and out of their depth against a buzzing Bees side that simply bullied their opponents.

Erik ten Hag seemingly picked the smallest team available to him, starting with Lisandro Martinez at the back and Christian Eriksen in midfield. Without Scott McTominay or Raphael Varane, both of whom were introduced at half-time, United were completely out-fought.

This defeat brings further questions about Erik ten Hag. We all know the playing style he is trying to implement at the club, but the players simply aren’t capable of it at this moment in time. None more so than David de Gea, whose deficiencies we pointed out ahead of kick-off.

He can’t play from the back, but he took the headlines today with a shambolic error for Josh Dasilva’s opener. Cristiano Ronaldo, back in the team, lost the ball in midfield and the Brentford man struck a low effort from range that shockingly squirmed under De Gea.

From that moment, United completely lost their heads. The weight of the world crashed onto their shoulders and they shrunk on the pitch. Given their distinct lack of height, that was a difficult thing to do, but what is so concerning is that after the Brighton defeat, we all saw this gameplan coming.

After Danny Welbeck had run rings around United’s defensive duo, thoughts turned to what Ivan Toney and Bryan Mbeumo would do to them. Toney always bullies defenders smaller than him while Mbuemo’s pace was going to cause Maguire issues. Ten Hag clearly believed he could implement his passing style without having to worry about Brentford’s threats. He was wrong.

The Sportsman
@TheSportsman
🐝 Brentford have ripped Manchester United apart in this first half...
📹 @SkyFootball
#BREMUN | #BrentfordFC 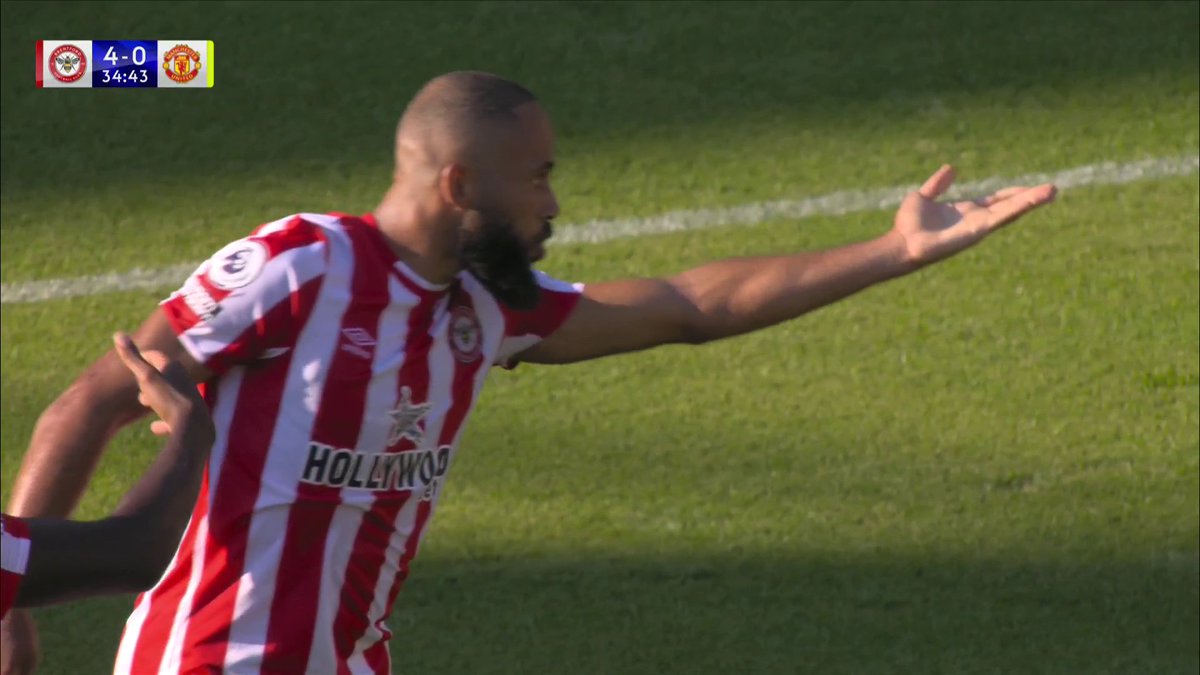 The second goal was nothing to do with physicality, but it did show the issues Ten Hag has. He wants to pass out from the back, but his players aren’t good enough to do so. De Gea attempted top play a goal kick to Christian Eriksen and the former Brentford man was caught under a press from Mathias Jensen, who kept his composure in the box to finish.

A few minutes later, United were bullied again, this time from a set piece. Dasilva won the header at the back post and played it across the six-yard box and Ben Mee was left to challenge for a header with Martinez. There was only one winner there. It is still too early to write off the 5ft 9in centre-back, but his height is a glaring weakness in the Premier League.

Gary Neville described it on commentary as men vs an under nines team, and he was bang on. The players were completely outfought, which is an utter disgrace that United fans have become all too accustomed to over the past 18 months.

Brentford and Thomas Frank deserve huge credit for their performance, which was encapsulated by a truly wonderful fourth. One long ball down the wing and Ivan Toney was in behind Harry Maguire, before he squared to the onrushing Mbeumo, who took one touch and slotted it home.

It was game over by 36 minutes and even if Ten Hag realised his mistake by bringing Scott McTominay, Tyrell Malacia and Raphael Varance on at half-time, it was too late. The stats paint a picture of arguably the worst United team we have seen in the Premier League.

This was their seventh straight away league defeat, something that hasn’t been seen since 1936. The last time Brentford beat Manchester United was in 1938. The last time United started a league season with two consecutive defeats was in 1992. They are bottom of the Premier League table. You’d think this was a new low for this football club, but somehow it always gets worse.

With Liverpool up next at Old Trafford and memories of that 5-0 hammering fresh in the mind, next week has the potential to be just as harmful, but perhaps Ten Hag has learnt a painful lesson at Brentford tonight. It was brutal, but it might just help him adapt.