Rugby League
News
The talented back has again left a club under a cloud and is now searching for one more shot in Yorkshire
George Riley
09:30, 23 Apr 2022

His list of off-field discretions is as long as his career honours list, so who will offer Zak Hardaker one final shot at redemption?

Wigan Warriors announced the “extremely disappointing” end to Hardaker’s four years at the club with immediate effect on Friday, leaving the 30-year-old seeking another last chance to resurrect a career that promised the world but has been hamstrung by controversy.

The electric talent of the 2015 Man of Steel has never been in any doubt. At Leeds Rhinos he played a major role in winning three Grand Finals, three League Leaders’ Shields, two Challenge Cups and a World Club Challenge. He made the Betfred Super League Dream Team three times in four stunning seasons. At his best he was unplayable.

But sadly, and so frustratingly for everyone who has backed Hardaker, for every high there has been a major off-field setback.

A starring role with England at the 2013 World Cup never happened as he left the squad after “acting unprofessionally” and was fined by Leeds. Six months later he apologised publicly and was banned heavily for homophobic comments during a game.

The following year in 2015 he was questioned over an alleged assault that prompted more disciplinary action and a further apology. He refocused and rebuilt that year and produced a sensational run of form that led to the Rhinos winning the treble and Hardaker being named Man of Steel. This appeared to be the rebirth, of a more mature man who had learned painful lessons. But Leeds would lose patience. 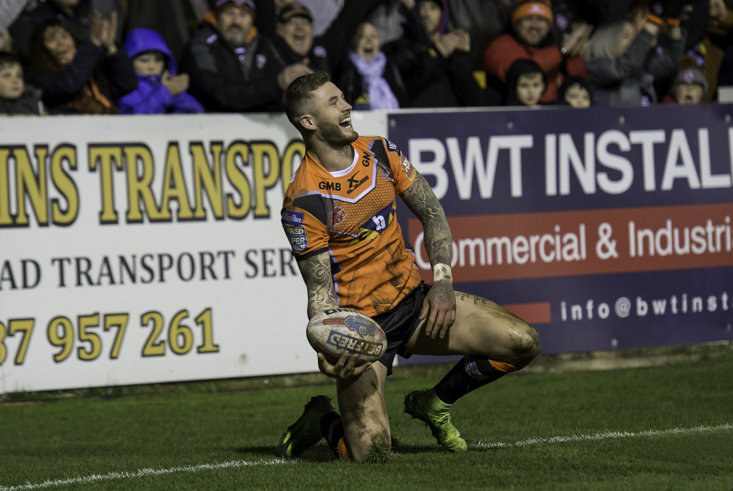 The chance at redemption would come with his next club Castleford, against Leeds, in the 2017 Grand Final. But Hardaker was sensationally dropped days before the Old Trafford final after testing positive for cocaine. No Grand Final against his former club, and again no World Cup as he served a 14-month drugs ban.

The following year, after his Castleford sacking, and just days after starting training on an olive branch from new club Wigan, came a drink-driving ban. But the Warriors stood by their star man and he went on to excel on a four-year deal to put everything right. The rebuild was again impressive, helped by fatherhood, and a seemingly deeper outlook on life. Until the latest setback, that is, and Wigan’s eventual loss of patience having “done everything they could to provide him with the platform he needed to shine at the highest level”.

I’m told the recent final straw came when Hardaker missed a recovery session after going out with his Wakefield pals following Wigan’s Challenge Cup win there.

The Warriors are on a huge culture drive this season and I’m told the coaching staff place a higher value on culture, standards, respect and behaviour than individual on-field performance.

The natural talent is exceptional, but has Hardaker finally run out of last chances?

Wigan almost tore up his contract after that overnight stay in a police cell that Hardaker at the time labelled a defining moment in his life. The player agreed in the autumn of 2018 to undergo alcohol rehabilitation at Tony Adams’ Sporting Chance Clinic to both change his life and save his career.

He spoke publicly, indeed admirably, about his struggles with lifelong Attention Deficit Hyperactivity Disorder, drink and that social drugs ban. But there have been similar setbacks to every rebirth, and even the most casual of social media users would have raised eyebrows at Hardaker’s drinking and socialising during the lockdown months that followed. He may now find himself running out of both options and allies.

That said, such is his talent, he is highly likely to get his wish of playing on, back home in West Yorkshire.

I understand Hardaker has already personally reached out to his old mentor at Leeds Brian McDermott, now head coach of ambitious Championship leaders Featherstone Rovers, where a young Hardaker enjoyed a blistering start to his career on the doorstep of his Pontefract home.

McDermott, though, is a strong disciplinarian for whom maximum commitment is a minimum requirement, and will seek concrete assurances from the player before being comfortable with adding him to his star-studded promotion-chasers.

Interim Leeds boss Jamie Jones-Buchanan has also spoken to Hardaker, with their struggling squad vastly depleted at the wrong end of Super League. The imminent arrival of a new head coach in Rohan Smith makes any permanent deal unlikely but a short-term move a possibility. Former club Castleford are also keen subject to space on their wage bill, while Hull FC are monitoring a slightly less likely deal.

Had Wigan not moved to release Hardaker this week I would have backed a permanent move home to Featherstone from next season, when his contract was due to expire and when Rovers will hope to be playing in Super League for the very first time.

If there is to be a final shot at redemption then it seems Post Office Road would provide the ideal opportunity. Back where it all started, and under the stewardship of McDermott who is as well placed as any coach in the game to ensure Hardaker’s vast array of qualities finally overwhelm the personal demons that have so muddied his professional career.