The Grand National is here, one of the greatest and most anticipated days in the sporting calendar. On Saturday, millions of eyes around the globe will be transfixed by the famous race.

However, it's not the only event taking place at Aintree on Saturday. We have you covered on all of the runners and riders.

Grand National day gets underway with a three-mile handicap hurdle.

Unowhatimeanharry is a dual course winner including over this trip in November. He may be rising thirteen but his fire still burns brightly and wasn’t totally disgraced at Cheltenham. He finished mid-division there but has been dropped 2lb, has Kevin Brogan back on board, loves it at Aintree and the yard are in much better form now.  He is there to be shot at under top weight and while I think he will run a big race, he keeps the weights down for plenty of young stayers.

J’Ai Froid is on a roll, searching for a five-timer but after hacking up at Warwick he has been put up 13lb. He has risen a total of 37lb for his wins and will find the ground much quicker than he has been facing.

Further down the weights, the likes of Come On Teddy, Ballybegg and Southfield Harvest all have clear chances. Come On Teddy ran a cracker in the Pertemps Final at Cheltenham when a fast finishing third and expect him to play a leading role while Ballybegg, who was entered in Fridays Grade 1 Hurdle, is on a hat-trick after running down Papa Tango Charley at Wetherby and steps into handicap company for the first time. He too is of interest along with Southfield Harvest who represents the red-hot Paul Nicholls team and was a solid third in a good handicap ay Newbury seven weeks ago.

I will side with HOMETOWN BOY here though for Stuart Edmunds. He made all to win a Kempton six weeks ago and was not stopping at the line.  He is 7lb higher here but fourteen months ago was only beaten three lengths by McFabulous trying to give him 5lb at Market Rasen. He loves decent ground and speed tracks, and this test should suit him well. 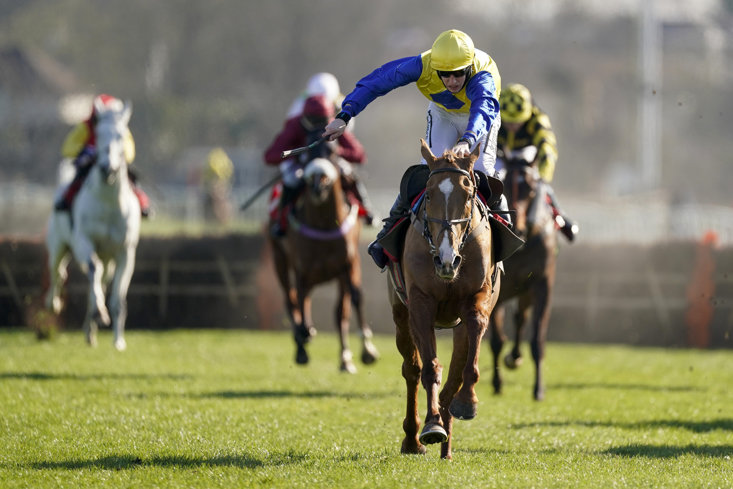 The Mersey Novices Hurdle is a Grade 1 over two and a half miles.

My Drogo has quickly developed into a useful performer after only making his debut at Cheltenham in October. He has won all three hurdle starts with increasing superiority as he climbs the ladder and was very impressive at Kelso five weeks ago. Connections were never interested in tackling Cheltenham and he looks the one to beat.

BALLYADAM gets the vote though on the back of his well beaten second in the Supreme Novices Hurdle. That does not tell the whole story as he made an horrendous blunder two out as the taps were truly turned on and did remarkably well to pick up again and chase Appreciate It. He beat the rest off well and the better ground will be to his liking.

With a couple of front runners in here, including Adrimel, there should be a decent pace on and that will suit Ballyadam.

Dreal Deal missed Cheltenham through illness but is searching for a five-timer and landed a Grade 2 in Ireland last time, sweeping from the back of the pack to score at 22/1. That was impressive and he started life off in low grade handicaps. This would be some story if he completed the transition to Grade 1 winner.

At a bigger price I think Jay Bee Why could have a say. His three hurdle runs have all come at Warwick, a similar speed track to Aintree and was only beaten three lengths behind Adrimel in heavy ground in January. That was Grade 2 company and he had little trouble landing odds of 2/7f back there at the end of February. He won his point-to-point on better ground and is worth considering each way.

SHISHKIN. Do we need to say anymore? Nine races, eight wins (fell on only other run) and has few peers in the novice ranks. Should be easy pickings but we won’t get rich baking him.

Fifteen of the best staying hurdlers in the country will line up for the Liverpool Hurdle at 3.35.

Richard Johnson’s retirement last weekend caught a few unawares with THYME HILL regarded as having a huge chance this weekend. He was amongst the top staying novices last season and proved he belonged in top company when beating Paisley Park at Newbury on decent ground in November. The former Stayers Hurdle winner got his revenge at Ascot on softer ground, but conditions have tilted back in the favour of the younger horse and Tom O’Brien can cement his new job as No.1 to Phillip Hobbs with a Grade 1 success.

He missed Cheltenham due to an eleventh-hour setback, but that means he comes here fresher than Paisley Park and Roksana who both had tough races at the Festival. Roksana has been runner-up on all three visits to Aintree and was not beaten too far at Ascot in the aforementioned Long Walk Hurdle.

The others all have a little bit to find on the figures, mainly stepping up from handicap company and I expect Thyme Hill, Paisley Park and Roksana to re-enact that Ascot contest and fight out the finish. 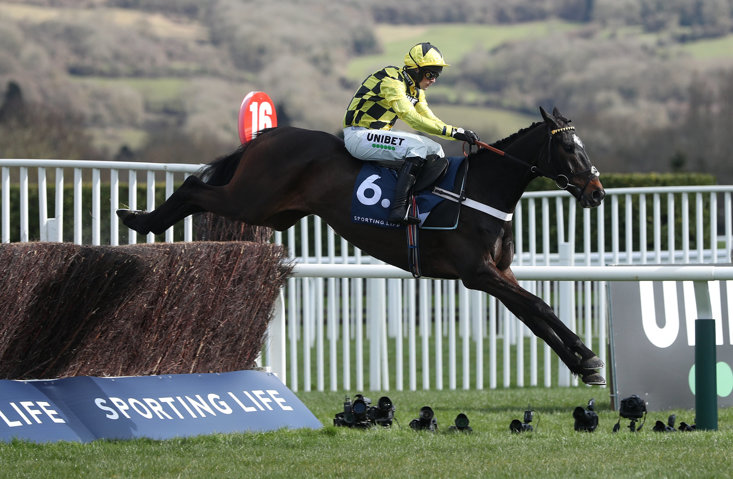 The race that precedes the National at 4.15 is almost as competitive as the big one itself but in a similar vein, may have a standout at the head of the market.

HAPPYGOLUCKY was only having his eighth career start when sent off as favourite for the Ultima at Cheltenham and he ran well to be second to Vintage Clouds. He travelled strongly and prominently, traits which are suited to Aintree and if that effort hasn’t taken its toll on the 7yo, he is certainly the one to beat.

Cloudy Glen carries the Trevor Hemmings colours of Cloth Cap and also owns Vintage Clouds who conquered Happygolucky at Cheltenham. Cloudy Glen was also second at Cheltenham, in the Kim Muir and like the favourite incurred a 2lb rise. The Ultima did look the stronger event though and Cloudy Glen was certainly exceeding expectations in a return to form.

Top Notch was placed in the Plate behind The Shunter at Cheltenham which is solid looking form while Spiritofthegames ran credibly in the Pertemps Final, but has run poorly on both his visits to Aintree so is passed over.

Tom Lacey won the race in 2018 and saddles Johnbb who steps up to three miles for the first time. He looked beat when falling at Wetherby last time but won well there on his previous run and the step up in trip could bring about improvement for another lightly raced seven-year-old

You may need to be sectioned to be taking 4/1 about any runner in the Grand National, but CLOTH CAP stands out like a sore thumb. Jumps well, stays longer than the mother-in-law and looks chucked in on his recent effort. Ticks every box and granted clear round he will we be involved at the business end. Burrows Saint is another who I strongly fancied last year before Covid struck. He too has a good record on decent ground and is worth siding with. At a bigger price Anibale Fly is worth a small play. Lots of back class and well treated on his two Grand National efforts so far. Can easily sneak into the frame.

The twenty first and final race of the Aintree Grand National Festival is a bumper with twenty lightly raced runners heading to post with all but one already tasting victory.

The market has Balco Coastal in as a relatively short priced favourite considering the unexposed nature of the entire field, but it was hard not to be impressed by his seventeen length demolition of the field in a Kempton bumper two months ago. He was second in an Irish point-to-point to a subsequent Grade 1 second and while he has claims, he is far too short in the betting at around 6/4.

The Gossiper heads a host of challengers, trained by Emmet Mullins. Having fallen in both his point-to-points, he made a winning bumper debut at Wexford on heavy ground as a well backed favourite and although he tackles very different conditions here, Patrick Mullins keeps the ride with his dad, Willie, not sending a runner over for the race.

It has been a good week for Paul Nicholls and he can end it in the best fashion with victory for his KNAPPERS HILL with his daughter Megan taking the ride. He won easily on good ground at Chepstow in October on debut and won a listed contest at Ascot beating his stablemate, Stage Star who reopposes, while the third home ran well for a long way in the Champion Bumper and was not beaten too far.

Plenty of the others have shown lots of promise in victory too in a very difficult conclusion to the meeting.