Whitehaven know that absolutely nobody will give them a chance when they welcome Super League champions St Helens and The Sportsman cameras in the Betfred Challenge Cup on Saturday afternoon.

But coach Jonty Gorley’s part-timers also know that nobody gave winless Toulouse any hope against the unbeatable Saints last weekend, and the French side produced a sensational upset to claim their first ever top-flight win.

The Sportsman is ready to show a proper Cup tie, one with all the romance and potential of a monumental shock, against the backdrop of a likely walloping for the underdogs if Saints turn up hungry.

“This is my biggest challenge as a coach so far, it is the pinnacle and doesn’t get much bigger,” says Gorley, whose side sit 10th in the early Betfred Championship table, with two wins from six.

“You don’t get any bigger than St Helens in this country. It is a different level and will be a good experience for everybody involved.

“Saints have proved they are the best team in the last few years and the best team now so it is going to be a big ask for our lads to compete with them. All I can ask is for 100 per cent effort and commitment.

“It is a massive opportunity for the lads to say they have played against the best in the world.” 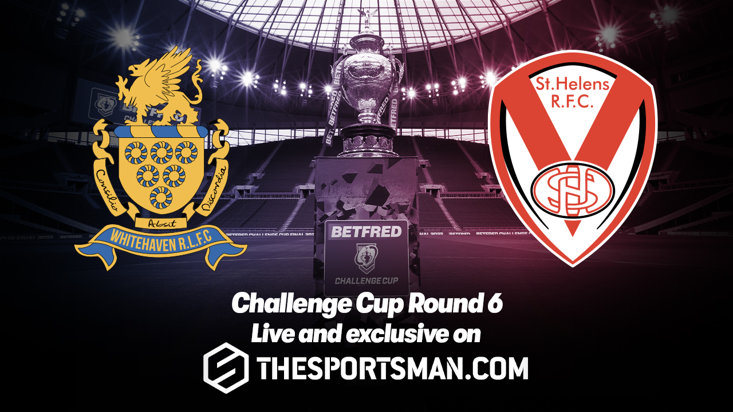 A massive opportunity for the Whitehaven players yes, but a massive chance too for the region to tap-in to its thirst for rugby league. Cumbria is a league hotbed brimming with talent and supported by a huge network of community clubs. Having the best club side in the northern hemisphere in town is likely to get the place bouncing.

“It’s 20 years since St Helens have been here so hopefully with the best team in the country coming to the county you would like to think that we can get five thousand and make it a good atmosphere for the lads. “

One of those lads who is desperate to shine is half-back Alex Bishop, enjoying his first season in British rugby league after moving from Australia.

“I’ve spoken to him this week and he’s pretty excited,” he says. “He still has the Saints accent. In the last few years I’ve been looking at what he has done and the footprint he left.

“He told me Whitehaven is the most beautiful part of the UK to live, apart from St Helens apparently.  I’m not sure about that – Brisbane is quite nice. He told me it was beautiful and nice here then I arrived and it was hailing.

“Grandad told me to take Saints on and be as fit as you can be. If you are fit enough and give it your all then something will happen around you.

“This is the biggest game I’ve had. I’ve played against some big sides back in Queensland but this is by far the biggest.

“I can’t wait to test myself against the best. There is no better opposition than the three-times champions. We have to give it a red-hot crack and see what happens.”

So what could happen? What chance The Sportsman cameras witnessing the mother of all Cup upsets?

“Anything can happen. If our 17 players have the best game they’ve ever had and St Helens are a bit off form then who knows what happens. I just want commitment and attitude and I’ll be happy with whatever comes from that.”

Former Scotland captain Andrew Henderson joins me for live and exclusive commentary of Whitehaven v St Helens in the Betfred Challenge Cup 6th Round, Saturday from 1:45pm only on The Sportsman.