Horse Racing
News
The heavy favourite won by a distance in the first race on Tuesday
Simon Lillicrap
13:52, 16 Mar 2021

Willie Mullins got the punters off to a flyer at the Cheltenham Festival, with Appreciate It winning the Supreme Novices’ Hurdle by 24 lengths on day one of the famous meeting. The pre-race favourite put in a flawless performance to win the opener as Paul Townend guided him to victory with relative ease.

The virtual Cheltenham roar and the empty stands certainly provided a different backdrop than we saw 12 months ago, but the excitement on the track still remained. Across the 2m½f race, over eight hurdles, the huge Appreciate It showed his class as Mullins won his record seventh Supreme Novices’ Chase.

It could have been a one-two for the Irish trainer as Blue Lord was clear in second before falling at the last, but luckily both rider and horse got up unscathed. For Pleasure, as expected, led the way early on, with Appreciate It sat in second place over the opening few furlongs. The 40/1 outsider put five or six lengths between himself and the chasing pack early on, before the pack reeled him in with four hurdles to go.

Blue Lord, Soaring Glory and Ballyadam all gathered behind For Pleasure but it was Appreciate It, unbeaten over hurdles, who was guided perfectly by Townend and looked set to pounce all race, before striking with two furlongs to go. He sat on the shoulder of the leader before taking control of the race and blowing the field away.

As Appreciate It made a push for the line, Ballyadam made a huge mistake on the second last which cost him ground, although he would recover to come home in second. Blue Lord was attempting to close the gap on his stablemate before coming down under little pressure on the last, but by then Appreciate It was streaking away from the rest of the field. 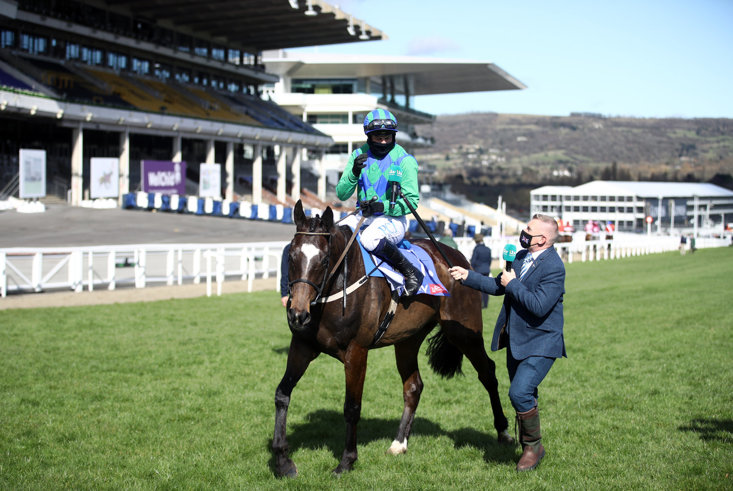 Victorious jockey Townend commented to ITV on board the winner: “That was more like it from this lad. It was well documented that he was more workmanlike the last day but this was more like it. It was a proper performance, wasn’t it?"

Asked what it was like to ride the first Cheltenham winner in front of no fans, he added: “It was different, very different, but we are so lucky to be here and take part. It was very different but I could hear the Irish boys in the corner so it was OK."

Keep up to date with all the results from day one here.