Football
News
The Gunners barely had to leave second gear to beat a Leicester side with one eye on Thursday's European tie
Joey Mills
18:22, 13 Mar 2022

Arsenal were the victors against Leicester City, in a meeting of two teams who have one eye on Europe. The Gunners are jockeying for a position in the top four, and they returned to the Champions League places with this win. The Foxes have a crunch clash with Stade Rennes in the Europa Conference League on Thursday. The shadow of this upcoming match left Leicester in the shade, as they lost 2-0 to an Arsenal side that never needed to leave second gear.

Vulnerability at set pieces has been a grim theme of Leicester’s season, and once again Brendan Rodgers will be left tearing his hair out over these failings. Gabriel Martinelli’s whipped near-post delivery found Thomas Partey, who powered in a header at the front post to undo a promising Foxes start. The Ghana midfielder then tried to bend one in from distance, striking the corner of the woodwork as Leicester struggled to settle.

A Kiernan Dewsbury-Hall cross was unconvincingly pawed out by Aaron Ramsdale, and the ball reached James Maddison. The England midfielder was brilliantly closed-down by Ben White, but a first-time strike could have brought Leicester level.

Alexandre Lacazette hit a long-range strike straight at Kasper Schmeichel, but the away side began to take control from here. A big chance arrived when Marc Albrighton’s floated ball found the head of Harvey Barnes. Ramsdale was on hand to make a top-drawer save, but Leicester were beginning to show potency.

Rodgers’ side used the width of the pitch to stretch Arsenal, switching the play to try and create openings. Leicester had failed to settle into a passing rhythm early, but after the half-hour mark they were finding each other with precise medium-range balls. The Foxes enjoyed 75% possession over the last 15 minutes of the half, giving Mikel Arteta plenty to think about at the break. 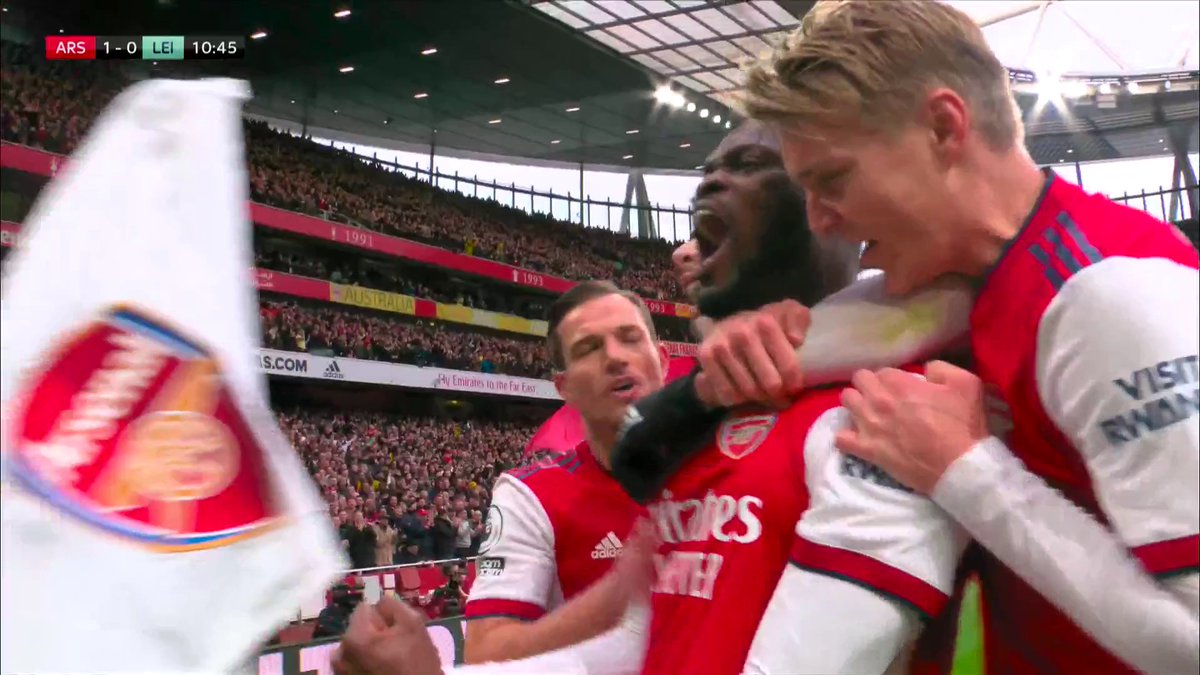 Arsenal started the second half quickly. Slick one-touch passing opened up space for Martinelli to run past two defenders out wide. The Brazilian played the ball across goal, eventually reaching Bukayo Saka, who forced a dive out of Schmeichel. It was an exhilarating move from Arsenal, personifying the verve, speed and invention they are capable of at their best.

Lacazette then forced Schmeichel into a point-blank save, before Luke Thomas heroically cleared the ball off the line. There were handball shouts, as Caglar Soyuncu’s arm looked to prevent a chance for Partey on the follow-up. A long deliberation followed, as VAR was consulted. Referee Anthony Taylor was summoned to the touchline screen, and the penalty was awarded.

Lacazette fired hard into the top corner, and Schmeichel immediately ran to Taylor to complain about the Frenchman’s method. The goalkeeper objected to a pause in the run-up, but the goal was awarded. The strike snapped a nine-game goalless streak for Lacazette, and it was a goal he deserved for his role in so many blistering Arsenal attacks this afternoon.

Just as they had in the first half, Leicester eased into their passing game as the second period wore on. At this point though their efforts felt toothless, lacking the urgency befitting of a team 2-0 behind. Rodgers will need to see more fight from his players if this season is to be elevated from listlessness.

The confidence with which Arsenal were operating was perhaps best displayed by Martinelli, when attempting to juggle the ball in the Leicester box. His attempt was unsuccessful, with the ball quickly cleared, but the fact he even tried was indicative of the “last day of term” feel at this point. Leicester weren’t willing or able to pressurise Arsenal, and the Gunners were happy to spin their wheels and have fun doing it, safe in the knowledge their lead wasn’t under threat.

It was an entertaining and effective display from Arsenal, but their Champions League credentials will be thoroughly tested on Wednesday. Jurgen Klopp’s Liverpool are the visitors in that game, in a game that will have a crucial bearing on both the race for the top four, and the two-team shootout for the title between the Merseyside club and Manchester City. If Arsenal wish to dine at the top table of European and domestic football again, it is the sort of match they need to win.