Eyebrows were raised when Leeds United cashed in on Kemar Roofe earlier this month, his £6.5million move to Anderlecht coming after Pontus Jansson had been sold to Brentford for a similarly hefty fee.

Roofe top-scored for Marcelo Bielsa's side last season, netting fifteen times as they finished third in their best campaign for years.

Roofe thrived under Bielsa, benefiting as much as anyone from a gruelling pre-season which saw players pushed to the limit by their Argentinian head coach.

The former Oxford United striker won the Championship Player of the Month for August following his blistering start to the campaign and kept Patrick Bamford - at £11million Leeds' biggest arrival since Robbie Fowler in 2001 - out of the side.

Roofe scored some memorable and indeed vital goals last season; the deadly double which downed Derby at Pride Park in the second week of the season, the dramatic 95th-minute winner at Aston Villa which put Leeds top at Christmas.

On Boxing Day, he repeated the trick with two late strikes which gave Leeds a 3-2 home victory over Blackburn Rovers. Roofe missed eight games with a knee ligament injury between February and April but returned to action and scored the winner in Leeds' play-off semi-final first leg win at Derby.

The strike, a clinical finish from Jack Harrison's delightful cross from deep, underlined Roofe's importance to Leeds but he missed the second leg with a calf injury as Derby claimed a 4-2 win to progress 4-3 on aggregate.

All in all, it was the best season of Roofe's career so his sudden departure, coming as it did with the player entering the final year of his contract and Leeds under pressure to meet Financial Fair Play requirements, understandably led to supporters demanding he be suitably replaced.

A 20-year-old loanee from Arsenal was perhaps not what many had in mind, but in Eddie Nketiah, Leeds may have found the player who can help them return to the Premier League after a 16-year absence.

In just four appearances for Leeds, Nketiah has scored three times. He claimed the opening goal on his debut in a 3-0 win at Salford City in the League Cup.

Eight days later, Nketiah made his first league appearance for Bielsa's men, stepping off the bench in the 78th minute at home to Brentford. Within three minutes, his predatory instinct was clear to see as he tucked away Helder Costa's low cross to secure a precious 1-0 win for his new team.

As Nketiah wheeled away to roars of "Eddie, Eddie, Eddie" around Elland Road, Arsenal legend Ian Wright, a spectator in the crowd, filmed himself joining in the chants.

Eddie Nketiah
@EddieNketiah9
Disappointing result, but proud of the way the team fought tonight. Always nice to get another goal for @LUFC . ⚽📞 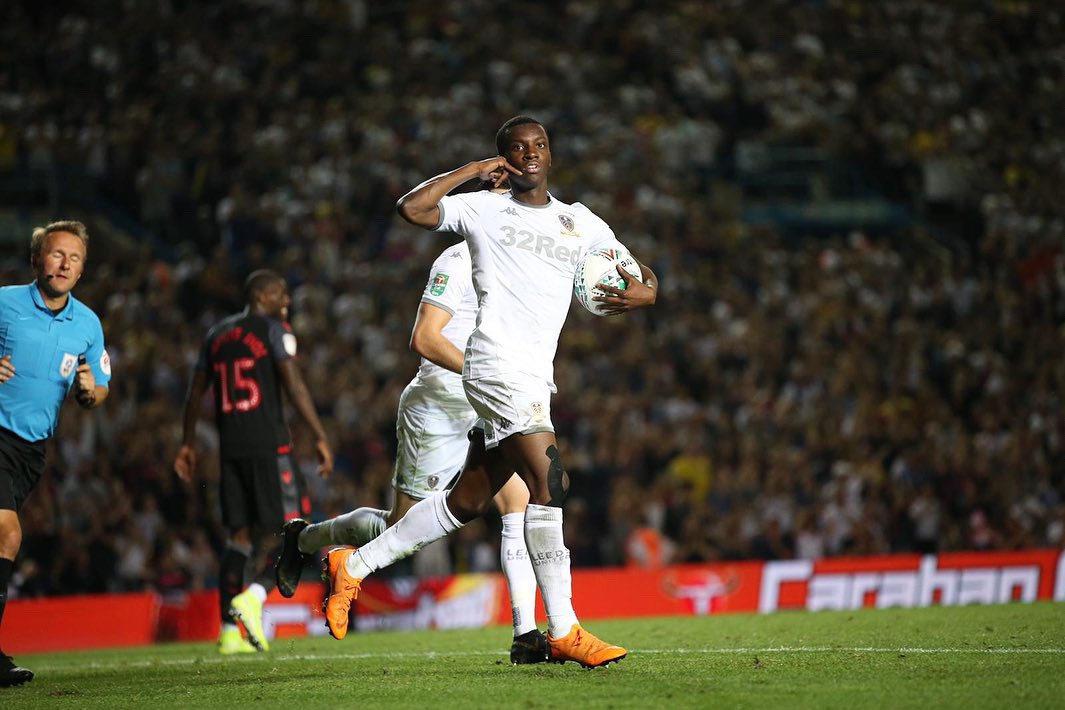 Nketiah further endeared himself to the Elland Road faithful when he scored his third goal for the club during Tuesday's League Cup tie at home to Stoke.

Leeds lost on penalties, but there was no shame in that.

Many of their first-choice players did not feature and it has to be remembered that Bamford is Bielsa's number-one striker - yet Nketiah is proving a very worthy addition to their squad.

In 197 minutes of first-team football for Leeds, he has scored three times to average a goal every 65.6 minutes. At this level, that is an impressive statistic.

Before heading north, Nketiah had a terrific pre-season with Arsenal, becoming the breakout star of their tour of the United States.

He scored a late winner against Bayern Munich before netting twice more against Fiorentina. Leeds fought off competition from Bristol City and Fortuna Düsseldorf to sign Nketiah and have committed a substantial sum in wages and loan fee to secure his services this season.

The relationship between The Whites' director of football Victor Orta and Arsenal manager Unai Emery, acquaintances from their time together at Sevilla, helped broker the deal.

Nketiah has the coveted knack of being in the right place at the right time but, pleasingly for Bielsa, he is not relying on the prodigious 20-year-old. Bamford has scored four times himself already this season and is in fine form, so Nketiah will, for the time being at least, be used largely as a substitute.

At Elland Road, under Bielsa's watchful gaze, his star should continue to rise.

Leeds United
@LUFC
67' GGGGGGGGGOOOOOOOOAAAAAAALLLLLLLL!!!! EDDIE NKETIAH GETS ONE BACK!!! 1-2 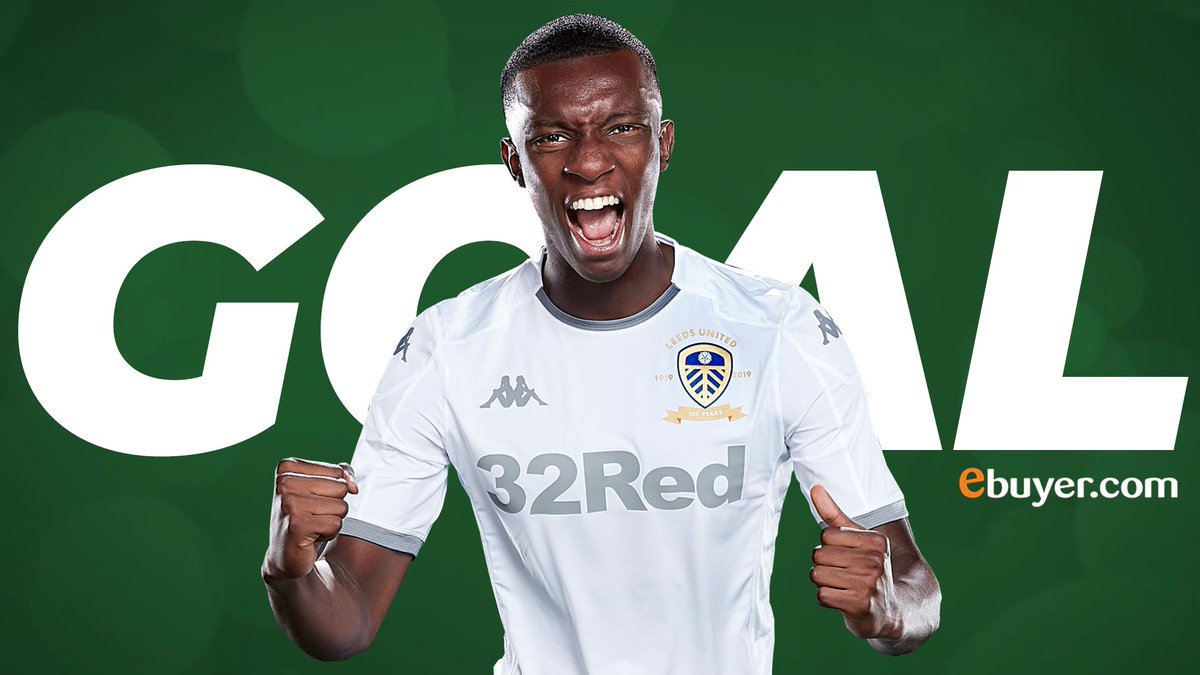 1103
9082
More
football
Thiago, Kalvin Phillips And The Premier League ‘Quarterbacks’...
Thanks for reaching out. You do the math. My bad. Americanisms, you gotta love ‘em. We’ve [ ... ]
football
Wayne Barton's Book On David Beckham Highlights Golden Balls'...
When historians look back at the sports scene at the turn of the millennium, there will most certainly [ ... ]
football
Rosé For Rodriguez, A Bollocking For Bilic, Five Stories You...
Managers can’t manage masks, fans are finding new ways to hail their heroes, and Jurgen Klopp [ ... ]
football
The Covid Defying Smart Helmet That Could Help Unite Football...
After the longest season in history, a mercifully short reprieve for players to catch their breath has [ ... ]
football
Get An Edge On Your Rivals This Season With The Fantasy Premier...
What are you this year? ‘Lallanas in Pyjamas’? ‘Murder on Zidane's Floor’? [ ... ]
football
Neymar's Handbags, Shy Guy Jose, And Other Football Stories...
Just like that, we’re back in the room. There’s new rules (on and off the pitch), and renewed [ ... ]
football
Celebrating The Return Of The Premier League With Its Best Ever...
After the shortest pre-season on record, even if it has felt to some of us like the longest ever, Premier [ ... ]
football
Lionel Messi Teams Up With Budweiser To Inspire Tomorrow's Footballing...
Lionel Messi, for all you do, this Bud’s for you. We’ve got to admit, it’s got a certain [ ... ]
football
From 007 to 46 Million Followers, Ten Facts You Never Knew About...
Everton finally announced the signing of James Rodriguez on Monday evening, after the Colombian superstar [ ... ]
football
The New Liverpool Book With A Groundbreaking View Of The Shankly...
September should always hold a special place in the hearts and minds of Liverpool Football Club and [ ... ]
football
The Questions We Want Answering After Watching All Or Nothing:...
“You have to be a bunch of bastards!” Annnd with that, we’re hooked. The last day [ ... ]
football
Football History Comes To Life With The Guardian’s Forgotten...
For much of 2020, the general consensus amongst the sporting community has seemingly been the desire [ ... ]
football
Book Review - Close Quarters: An Extraordinary Season On The...
He has been called the luckiest journalist in the world. When award-winning sportswriter Neil Harman [ ... ]
football
Work Out Like A Chelsea Player With The Most Advanced Football...
It claims to be the most advanced football training experience ever - imagine being trained by world-class [ ... ]
football
Blue Moon, Bubbles & Delilah - How Football Clubs Got Their...
Liverpool and Celtic fans both enjoy spine-tingling versions of ‘You’ll Never Walk Alone’ [ ... ]
football
The Lionesses Who Helped Lead The Charge In Lyon's Coupe De...
For the second time in less than a fortnight, Olympique Lyonnais and Paris Saint-Germain faced off in [ ... ]
football
Five Premier League New Boys That Are Set To Take Next Season...
A swift summer transfer window is on the cards, with just 48 days between Premier League seasons due [ ... ]
football
Bobby Robson And The Most Glittering Chapter In Ipswich Town’s...
Few in Ipswich could have predicted what was to come when Bobby Robson replaced Bill McGarry at the [ ... ]
football
How Tearing Down The Twin Towers Destroyed The Magic Of Wembley
On July 26, 1998, plans for a new Wembley were revealed to the world, promising a national stadium [ ... ]
football
Here's To The 2019/20 Premier League Season: Five Moments That...
It all began on August 9, 2019. 353 days later, a fortnight shy of a full entire year, the 28th Premier [ ... ]
football
Why Figo To Madrid Is Still Football's Most Controversial Transfer...
We’ve had Neymar, Sol Campbell and Carlos Tevez but on this day in 2000, Luis Figo completed the [ ... ]
football
Remembering Laurie Cunningham: The Football Pioneer Whose Legacy...
In 2016 the English Heritage scheme erected a blue plaque in Stroud Green, North London to celebrate [ ... ]
football
Book Review - King Eric: Portrait Of The Artist Who Changed...
Leeds. Irwin. £1million. Title. Double. Palace. Kick. Ban. Seagulls. Return. Liverpool. Double. [ ... ]
football
Replacing Rapinoe And Morgan? The Ladies Who Can Light Up The...
Write off 2020. The best thing about it is remembering how good 2019 actually was. One of the undeniable [ ... ]
football
Wembley Woe: When England Lost To Germany At Euro ‘96
In the summer of 1990 England tasted their first ever penalty shootout heartbreak when they went out [ ... ]
football
Get Ready For A Nostalgia-Fest With Italia '90 Podcast Vincerà!
Hosted by Mark Godfrey and running from June 8th to July 8th, Vincerà! is a 24-part podcast series [ ... ]
football
Harry's Heroes, Vinnie Jones And Revenge At The Battle Of San...
When Vinnie Jones started crunching San Marino players left, right and centre, it was clear the friendly [ ... ]
football
Prodigal Talent Of The German Game Is Turning RB Leipzig Into...
This article first appeared in The Sportsman on 07/12/19 What were you doing at the age of 28? If it [ ... ]
football
''I Was Really Wasted'': When Jurgen Klopp Woke Up Hungover...
This article first appeared in The Sportsman on 05/09/19 Anyone watching the Amazon Prime documentary [ ... ]
football
Book Review - Yer Joking Aren't Ya?: The Story Of Middlesbrough's...
In 1997, Middlesbrough Football Club reached the finals of both the League and FA Cup, had the might [ ... ]