Less than 18 months ago Denmark were a dodgy penalty decision away from forcing a shoot-out in a European Championship semi-final, all against the backdrop of the shared horror that was Christian Eriksen’s cardiac arrest in the opening game of their tournament.

With Eriksen back to his best, there was an expectation that Kasper Hjulmand’s men might have something special in store once more at the World Cup in Qatar, but they simply never looked like picking up the win they needed from their final Group D game against Australia on Wednesday and were deservedly eliminated after their impotent performance in a 1-0 defeat. The Socceroos, justly, are the ones to progress.

They might have hoarded possession, pinned the Socceroos back and generally probed pretty well for much of their clash in Al Wakrah but in truth the Danes’ fallibilities in the final third were always likely to leave them short. In all honesty, this is a pretty bad Denmark team and Australia are simply better than them.

Denmark’s lack of a forward with any kind of instinct in front of goal was their ultimate undoing. Having come up goalless against Tunisia and gone down to a 2-1 defeat to France, the Red and Whites needed to prove they had a killer instinct.

Instead they had Martin Braithwaite, a striker with 10 goals in 64 international appearances and a tendency to find a pass rather than shoot on sight when the opportunity arises. He did exactly that early on at the Al Janoub Stadium, laying the ball off to Andreas Skov Olsen when he himself was better placed to test Australia goalkeeper Mathew Ryan.

Braithwaite, the third different player selected to lead the line for Denmark in this tournament, proved himself to be every inch the shot-shy striker whose career high goal tally in a league season is 11, and in terms of the pattern of play the tone was set. Hjulmand had proved uncertain in his selection policy, and the various forwards he’s picked have been exactly the same during their slim windows of opportunity.

Too much depended on Eriksen, a man the Socceroos did their best to keep in deeper positions more often than not. By the second half he had taken to attempting shots from impossible angles, and one could hardly blame him. 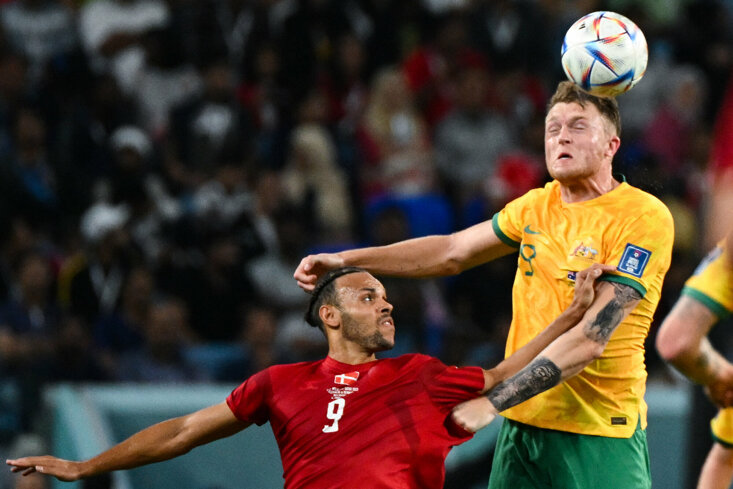 BRAITHWAITE WAS A PASSENGER UP AGAINST SOUTTAR

Graham Arnold’s side found the perfect balance of holding the Danes at bay while also threatening to cause problems on the break, and ultimately they had the game played more on their terms even if they saw a relatively small percentage of the ball. It was certainly no surprise when Mathew Leckie broke forward, turned Joakim Maehle inside and out, held his nerve and shot across Kasper Schmeichel to score the winning goal.

Kasper Dolberg, Mikkel Damsgaard and Andreas Cornelius were thrown on but it made no odds. Denmark were still short of substance, and when they thought they had a penalty for a foul on Dolberg it was quickly struck out by the sight of the assistant’s flag. They didn’t deserve a goal anyway.

Australia have come a long way to finally reach the round of 16 once more, 16 years on from their last knockout qualification. On Saturday they head to Al Rayyan to face the winners of Group C – likely Poland or Argentina – with the enthusiasm of a team who seem to be really buying into what their coach has asked for.

The Sportsman
@TheSportsman
🇦🇺🏆 WHAT A MOMENT FOR AUSTRALIA!
#AUSDEN | #FIFAWorldCup

This was the 23rd game of Australia’s World Cup campaign, 1,177 days after their first – a 3-0 win away to Kuwait on September 10, 2019, and even though there were five changes showing between that line-up and this one it is clear that this Socceroos outfit is a real unit which plays to its strength.

Braithwaite might not have been the sternest presence ever, but Harry Souttar again stood tall at the back just five weeks on from his return from an 11-month absence after ACL surgery, and the likes of Leckie, Mitchell Duke and Riley McGree regularly picked up good positions to receive an out ball whenever the Socceroos needed to relieve pressure.

This is not the 2006 team of Harry Kewell, Mark Viduka and Tim Cahill, but then that has been the best thing about this squad. They have worked brilliantly together to give the best account of themselves in every game. They’ve not relied on a star player to help them out like South Korea. They didn’t retreat within themselves hoping to get the point that might be enough, as happened with Ecuador. Instead they played on Denmark’s shortcomings and then backed themselves to grab the goal they’d need when the opportunities arose.

And that sees the Socceroos continue in the World Cup for another few days at least while the national inquiry begins in Denmark, a country which expected so much but had so little delivered. Australia couldn’t find the goals from open play to mount a challenge in Russia in 2018, and four years on they have exploited a team arguably even more clueless in front of goal to end their 16-year wait for more knockout football.