Adama Traoré has been reborn in Barcelona's colours. That youth academy player who made his debut at Camp Nou with FC Barcelona's first team one November afternoon has now returned home after a few years of exile, but this time in a very distinctive atmosphere.

On a chilly afternoon in 2013, Adama Traoré, who had played at practically every level of FC Barcelona's youth ranks, stepped onto the pitch and fulfilled a lifelong dream: to make his first-team debut for FC Barcelona and, what's more, to do so as a young prospect, replacing Neymar. Nine years after his debut, Traoré is now back at the Camp Nou, but this time as a player already established in the elite of world football.

That young striker, who grew up in the tough streets of l'Hospitalet de Llobregat, took his first professional steps at Barça at the age of 17 under Tata Martino, and now, almost a decade later, he has completed his return home alongside Xavi Hernández, an emblematic Barcelona player.

The road so far has not been an easy one and, like many other players who grew up in La Masia, Adama Traoré was forced to leave FC Barcelona due to a lack of opportunities in the first team. This is all too common, as there are very few players who, after a whole life breathing the azulgrana air, manage to make a place for themselves in the first team of one of the most demanding teams in the world. 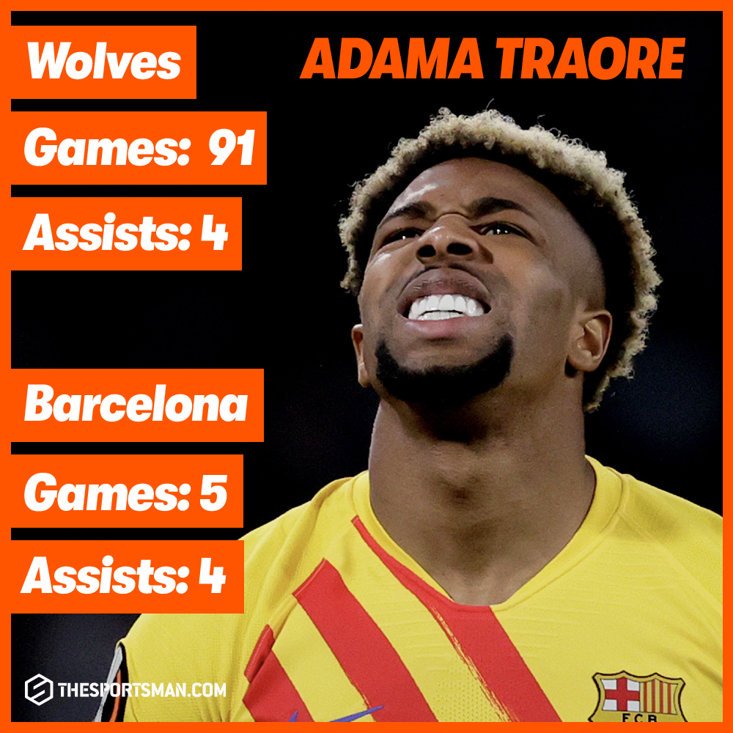 "The day I left Barcelona I set myself the goal of returning. It was very clear to me that I wanted to wear Barcelona's shirt again. It was always my dream," said Traoré in an interview with the club after the official announcement of his transfer.

Despite all these difficulties, Traoré was strong - both mentally and physically - and knew he had to pack his bags in search of opportunities. He landed in England, where he discovered the real face of football: the volatility and the cold atmosphere far away from Barcelona and his family and friends.

Despite this, Traoré never stopped fighting, with a focus on that dream that he eventually would return to the Camp Nou. Traoré is a hard-working guy, but he is especially a nonconformist who is willing to give his all to see his aspirations fulfilled. Now, after nine years of fighting away from home, he returns to Barça ready to realise many of his unfulfilled dreams.

The boy who played in the streets of Barcelona to escape from reality has returned home, as has Xavi Hernández who, under the leadership of Joan Laporta, is managing to restore Barcelona's enthusiasm.

A delightfully sweet aroma is once again wafting through the corridors of the Camp Nou and the young Traoré, with his magical electricity that reminds us of the physical and mental power of Jonah Lomu, is managing to extend a moment as sweet as a first kiss.