Football
News
If the Hammers reach the quarter final of the Europa League, it will be their best moment of an excellent era
Joey Mills
15:01, 17 Mar 2022

West Ham United face Sevilla tonight knowing they need to win by two clear goals to make it through to the quarter final of the Europa League. The fact this reads like a difficult, but not impossible prospect says everything about how far the Hammers have come under David Moyes.

The Scotsman took charge in December 2019, with West Ham sat 17th in the table and has guided them deeper than they have ventured in Europe for 40 years. The club are also still well in the hunt for continental football next season. These are good times to be a Hammers supporter, and a win tonight would be the crowning achievement of a brilliant era in the club’s history.

Despite their resurgence under Moyes, West Ham are still underdogs as they welcome Sevilla to the London Stadium. The Spanish side are six-time Europa League champions after all. The gap between the two teams is exacerbated further by some high-profile absentees in the Premier League side’s camp.

Talismanic forward Michail Antonio is facing a late fitness test having not trained on Wednesday. The Jamaica international is an indispensable part of the West Ham machine. Putting aside his goal threat, workrate and creativity, he is also pretty much the only striking option available to Moyes. Antonio has played 2,906 minutes for West Ham across all competitions this season. The recognised centre forward with the next most pitch time is 18-year-old Sonny Perkins, who has played 102 minutes across three appearances. If Antonio does miss out tonight, he leaves a gaping hole in the team.

The only man in the West Ham squad who has found the net more often than Antonio this season is Jarrod Bowen. The ex-Hull City man has had a breakout season, scoring 12 goals from his wide berth and proving an instrumental figure for Moyes. He also misses tonight’s game, as he’s still suffering from the heel injury that befell him against Liverpool earlier this month. 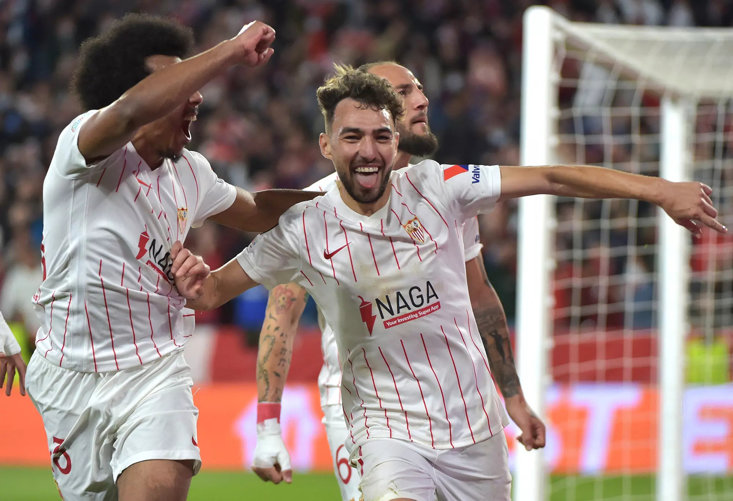 sevilla celebrate taking the lead in the first leg

It really is rotten luck that the Hammers are potentially without their two most potent attackers on such a big occasion. An injury to the ever-present Aaron Cresswell at left back is just the icing on a particularly unappetising cake for West Ham. The defender has provided the third-most assists at the club this season with seven. The two players above him in the list? Antonio and Bowen.

A team is not just built on two or three players though, and it is as a team that West Ham continue to fight domestically and in Europe. England midfielder Declan Rice would walk into arguably any starting eleven in the Premier League, and his galvanising influence could prove decisive. After a slow start to life in east London, Said Benrahma has kicked on tremendously this season. The wide man provides goals and assists at a rate not far off Antonio and Bowen, something the team will be in dire need of if they hope to overturn the 1-0 deficit.

There are plenty more reasons to be cheerful too. Craig Dawson is playing the best football of his career at 31 as the bedrock of the defence. The tricky and creative Pablo Fornals is always capable of turning a game on its head. The physically dominant Tomas Soucek is a threat at both ends of the pitch. West Ham’s team has quality throughout.

It’s this reason that they have emerged as a surprise package over the last couple of seasons. Perhaps the best way you can sum up how far they’ve come is by recognising they are no longer really a surprise package at all. In the same way he did at Everton, David Moyes has taken a traditionally big club that was enduring a low moment and solidified them as a threat to the top six. A surprise win over the Europa League’s old stagers Sevilla tonight would be the jewel in the crown.