Football
News
Before And After: Has Cristiano Ronaldo Transformed The Fate Of The Portuguese National Team?
Simon Lillicrap
10:40, 09 Jun 2019

There is no doubt that Cristiano Ronaldo is one of the greatest players to have ever kicked a football and he has been hugely influential for his club sides throughout the years. But has he transformed Portugal’s recent history or have things always been good for The Navigators? We take a look at the history of the Portuguese national team.

From 1930 until 1980, things were pretty bleak for Portugal aside from one World Cup appearance. That showing was impressive for a country making their international debut at a major tournament and they played some of the best football in the 1966 World Cup.

A side featuring Eusebio made it all the way to the semi-finals, eventually finishing third after winning five of their six games. Eusebio was the star of Portuguese football during the 60s and his nine goals that tournament were enough to bag him the Golden Boot but it was the only success the country had in that period.

It took 18 years for the country to qualify for another major tournament, the 1984 European Championships. That again proved to be a success as they reached the semi-finals once again before succumbing to a late Michel Platini goal as France won the tournament in their home country.

Their appearance at Mexico 86 was slightly more disappointing as they finished bottom of a group containing Morocco, England and Poland. Given that they beat England in their opening game and three teams went through from the group, this was the big flop of a tournament.

Once again there was a lengthy wait as they failed to qualify for the next three World Cups and two European Championships. At Euro 96 in England, they reached the quarter finals and since 2000 they have appeared at every single major tournament. They have gone from European nobodies to European Champions over the course of two decades.

Things had started to pick up before Ronaldo’s first tournament. In 2000, Luis Figo led the side to a third place finish at the Euros but two years later they were dumped out at the group stage once more in Korea and Japan 2002.

Then Ronaldo burst onto the scene. In 2004 they should have won the tournament but lost the final to Greece on home soil leaving a young Ronnie in tears. In 2006, as Ronaldo was gaining power, they finished fourth in the World Cup after another semi-final defeat. Two years later they fell at the quarter-final stage.

But progress was being made and a succession of major tournaments allowed football in Portugal to grow, as Ronaldo shone on the world stage. 2010 was disappointing as they lost to eventual winners Spain in the last 16 and in 2012 they made it all the way to the semi-finals.

The World Cup has been the sticking point for them and there was another group stage exit in 2014 before their crowning glory in 2016. The European Champions couldn't follow that up with another success in 2018 but they could achieve Nations League glory on Sunday night.

Ronaldo has been a key part of Portugal’s modern success and they have improved because of him. However, the country was starting on an upward curve and should have featured at more major tournaments than they did before 2000. 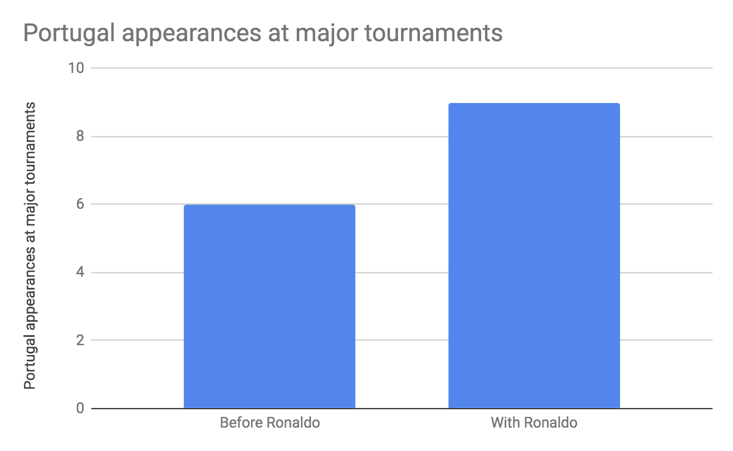