Football
News
The game was overshadowed by the mass 'Kroenke Out' protests outside the Emirates Stadium
Shane MacDermott
22:28, 23 Apr 2021

Everton won at Arsenal for the first time since 1996 in a game that was overshadowed by mass protests outside the ground. In scenes reminiscent of Stamford Bridge earlier this week, thousands of angry Arsenal fans descended the streets outside the Emirates to voice their disdain at owner Stan Kroenke.

The league system is sacred in this country and scenes outside clubs who signed up for the controversial European Super League proposal transcends club rivalries and a united front among football fans across the land.

Red smoke filled the night skies and placards were held high to further illustrate the fans’ opposing stance to the club’s role in the collapsed breakaway bid and American businessman Kroenke. The best signs read ‘Pin the fail on the Kroenke’ and ‘We wouldn’t wish Kroenke on Spurs’.

For Arsenal especially, a club that derived from munitions workers from the Royal Arsenal in South London, news of the big-money breakaway hit harder. The club came from the working class and is now run by the fiscally untouchable - who the fans vehemently urged to sell up.

The peaceful protests took a shocking turn when a fan fell from the top of the ticket office and reportedly broke his leg. 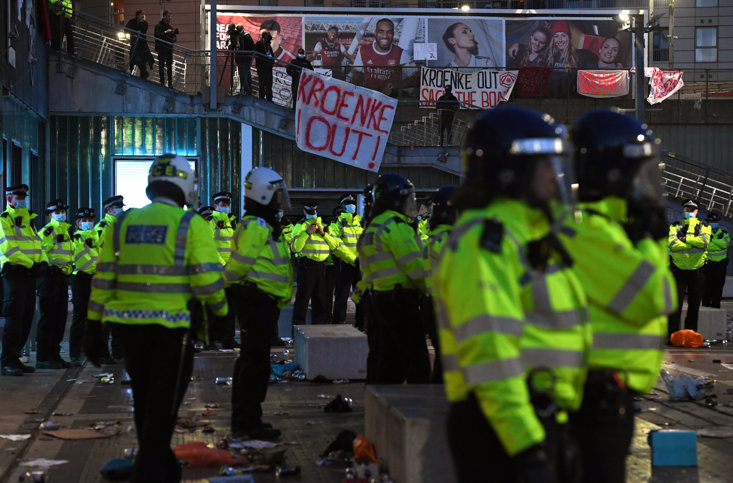 Everton even had to arrive on the East side of the ground to avoid the swathes of protestors and a potential repeat of what happened at Anfield last week when Liverpool fans vandalised the team bus, or when Chelsea fans caused their kick-off against Brighton to be delayed by 15 minutes when they blocked the team bus from entering the stadium.

On the pitch, it looked like a game between eighth and ninth in the Premier League with very few chances in the first half. Arsenal, understandably, looked like they were more focused on their Europa League semi-final clash with Spanish side Villarreal next Thursday.

Mikel Arteta was without strikers Alexandre Lacazette, through injury, and Pierre-Emerick Aubameyang who is recovering from malaria and they were sorely missed as the Gunners failed to fire in front of goal.

Everton’s influential Gylfi Sigurdsson came closest in the first half and was only denied a third goal in two games thanks to the woodwork. His brilliant strike beat the wall, the dive of Bernd Leno but couldn’t get down in time to give the visitors the lead five minutes before half time.

The one saving grace about the European Super League is it stopped VAR dominating the headlines, albeit for only a few days. Dani Ceballos seemingly earned the hosts a penalty after the restart when Richarlison was adjudged to have tripped the Spaniard.

It was cynical from the midfielder who went down after the slightest of touches and it would have been interesting to see what referee Jonathan Moss would have made of it on review, but winger Nicolas Pepe was offside in the build-up.

Mason Holgate was the luckiest man in north London as his mistimed clearance from Calum Chambers’ low cross hit the side netting.

Arsenal have only kept three clean sheets at home this season, with only Everton (two), Sheffield United (two) and Newcastle (one) with fewer. And it was a howler from Bernd Leno to gift the Toffees all three points on the road. 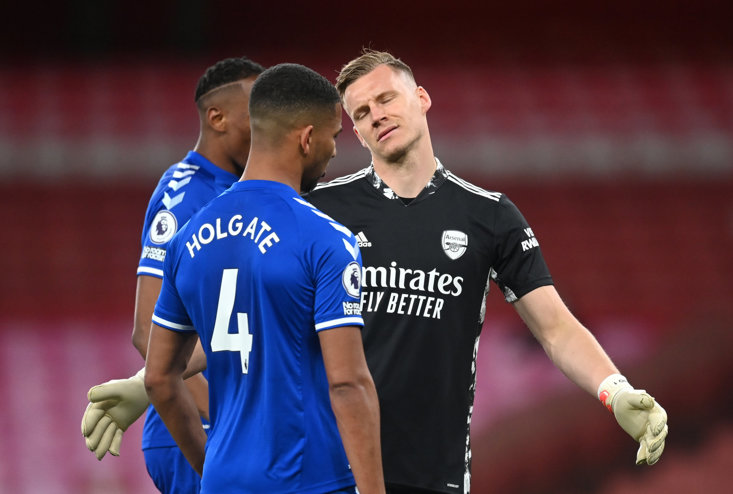 The German goalkeeper feebly flapped at Richardlison’s cross as the visitors leapfrogged Arsenal in the table.

Jordan Pickford produced a piece of magic at the end to keep out Gabriel Martinelli’s late effort to end Carlo Ancelotti’s side’s painful five-game winless spell, which curtailed any chances of European football next season.