The spotlight will be pinned directly on Ole Gunnar Solskjaer tomorrow afternoon when he takes charge of his first match as the permanent manager of Manchester United, who host Watford at Old Trafford.

During his three month spell as interim manager Solskjaer won 14 of his 19 matches, spanning across the Premier League, Champions League, and FA Cup.

United are now in contention to finish in the top-four, and face Barcelona in Europe, although they were booted out of the FA Cup by Wolves two weeks ago.

Prior to that exit, Solskjaer had only lost a single domestic game at the helm - against Arsenal - his final league game as caretaker.

That 'blip' aside, the Norwegian can look back on a superb record, having accumulated 32 points from 13 Premier League games, the most impressive of which was a 1-0 victory over Spurs at Wembley in what was viewed as his ‘first big test’.

So, how does Solskjaer’s 32 point tally compare to the Premier League’s best ever managerial starts - at a single club - after 13 games?

Well, only two gaffers have ever accumulated more points at the start of a tenure than Solskjaer.

Given the number of gaffers they’ve had in the Roman Abramovich era, you may not be surprised to hear that they both came at Chelsea.

Leading the way is Guus Hiddink who enjoyed two spells at the Blues, the first of which came back in February 2009 following the sacking of Luiz Felipe Scolari. The Dutchman roared out of the blocks with four straight wins, before losing out to Tottenham. However, after that the Blues took a whopping 22 points from a possible 24 through to the end of the season. 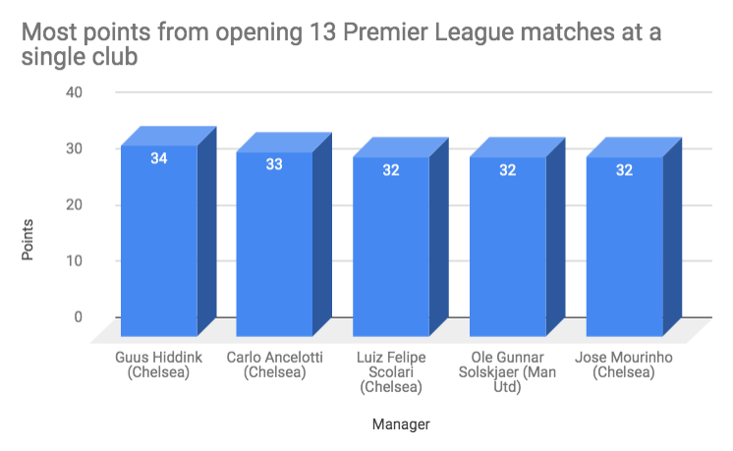 Behind Hiddink we have Carlo Ancelotti, who replaced interim boss Hiddink in the dugout that summer (2009). Like his predecessor the Italian burst out of the blocks with 11 wins from 13 top-flight games, and would go on to win the Premier League and FA Cup double.

We then have a trio of managers, including Solskjaer, who all took 32 points from their opening 13 games. Unsurprisingly, the other two were both at...yes, you’ve guessed it...Chelsea: Scolari and Jose Mourinho.

Scolari ran out of steam, losing his job in February of his debut season (see above), however Mourinho, who was then the ‘Special One’, continued to work his magic as he led Chelsea to their first Premier League title with a then-record 95 points - a tally that was topped by Pep Guardiola last season (100).

Back to Solskjaer. When United’s fourth full-time boss since Fergie enters the Theatre of Dreams tomorrow he’ll actually be hoping to avoid three consecutive defeats, having lost out to Unai Emery’s Arsenal and Nuno Santo’s Wolves (FA Cup) prior to the international break.

It would represent something of an anti-climax if he did lose, although it’s worth recalling that the likes of Sir Alex Ferguson, Louis van Gaal, and Ron Atkinson lost their opening matches following their respective appointments.