Football
News
Everything positive about City this term has gone through Silva in the middle of the park
Conor Keane
16:02, 02 Dec 2021

As a thunderous volley rustled the back of the net at Villa Park on Wednesday night, Manchester City’s Bernardo Silva had not only struck the winning goal of the game against Aston Villa, but it was his fifth in the Premier League this season and it highlighted the impact he is having in the middle of the park. The Portuguese playmaker has been a shining star for the reigning champions as they look to retain their domestic crown.

Everything positive about City this term has gone through Silva in the middle of the park where he is flourishing. What is the most surprising thing about the situation is that the midfielder looks to be loving his football following doubts over his future in the north west. The 27-year-old reportedly wanted a move away in the summer to seek a new challenge - fast forward a few months and he is 100% committed to Pep Guardiola’s cause and playing as a key component in the heart of midfield.

There has always been plenty to admire about Silva ever since he touched down on English soil in 2017 when he joined from Monaco and he has slowly worked his way up from squad player to an invaluable asset. Most of his time at Etihad Stadium has been spent on the right side of the front three, but the individual brilliance the player possessed always suggested he would play a deeper role in the years to come.

His composed and skilful nature was similar to that of club legend and namesake David Silva, and it always seemed that it was destiny for Bernardo to make that position his own, becoming part of the Spaniard’s legacy at City. His performances this season have been breath-taking and such a joy to watch and he will be crucial in this thrilling title race.

His manager has been just as entertained as the rest of us, bestowing his star midfielder with the highest compliment. After City’s victory over Aston Villa, Guardiola insisted: “He is the best [in the Premier League].

“He was the best two or three seasons ago. He was the best then too. He has a special ability to do whatever he wants with the ball. Against a good goalkeeper [Emiliano Martinez] it was an incredible finish.

“You have to go back to when we won with 98 points, review the videos, you will see the same player like this right now.”

It was also a particularly a special night for Guardiola who recorded his 150th Premier League victory, becoming the fastest manager to reach the milestone, taking just 204 games. As people continue to question City’s strength without a traditional number nine to lead the line, Guardiola’s side continue to excel with only Liverpool and Chelsea scoring more than their total of 29 goals.

Silva is currently the Citizens’ top scorer and he also boasts some impressive stats in which he ranks top in the club. The midfield maestro has attempted the most dribbles (38), which is not at all surprising because he is so gifted with the ball at his feet that it may as well be glued to him. He is also the player who has covered the most distance for City with an impressive 148.2km. Silva ranks second in the club stats for interceptions (7) and duels won (63) which shows just how much his game has evolved since he was given the responsibility and freedom to play deeper.

From the first 14 games this season, no player has stood out more than Silva than Mohamed Salah, but both have just as strong an influence on their sides, with both proving time and again to be the difference makers as the title race ratchets up over the festive period.

It takes a collective effort to win a Premier League title, especially in this competitive era with an abundance of quality on show, but a player of Silva’s ilk could prove to be the difference in a race as tight as this because there is simply no doubting he is one of the best in the world. 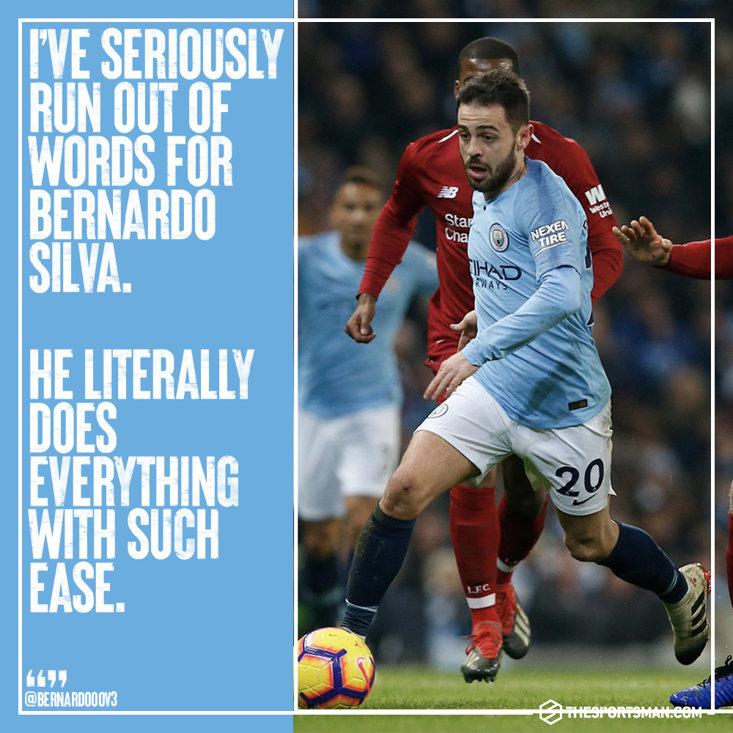