Round 16 of the Betfred Super League was a wild one. St Helens continued their dominance, Wigan put Toulouse to the sword, and Catalans faltered in Yorkshire, meaning changes at both ends of the table. Warrington managed to scrape their way above Leeds to reach ninth place and Ian Watson’s Huddersfield leap into third place impressively.

We’re here to round up the big stories we saw this weekend, so sit back, relax and read up ahead of the incoming magic weekend that’s a fortnight away.

Salford Red Devils have proudly broken their club record for biggest ever win in Super League for the second year in a row, this time defeating Wakefield at the AJ Bell Stadium 74-10. Last season saw them earn an 18-70 victory away at Castleford, but this year they pulled out the huge win thanks to efforts from Joe Burgess, Ryan Brierley and Ken Sio finishing almost every chance they had.

Prolific kicker Marc Sneyd filled his boots, converting 11 times from 13 attempts for the Red Devils, making him the highest goal converter in Super League this season with 51, seven ahead of Tommy Makinson in second.

It was a miserable afternoon for Wakefield, as reflected in Willie Poching’s post-match comments where he apologised to the Trinity’s travelling supporters, saying: “I want to apologise to our travelling fans for that performance. They stuck by us and stuck with us even though we were churning out what we did. We owe them more than what we gave them today.

“I thought we were poor. We have got to be workmanlike and we are a squad which needs a high percentage of people on the field to be performing well.”

Next up for Salford is a short trip to Warrington on Sunday, and Wakefield host Wigan hoping for a less torrid time with home support.

Tony Smith’s Hull KR were left with just two players on the bench in Sunday’s televised fixture as they suffered countless injuries in the 10-38 loss to Huddersfield Giants.

After half an hour, Ryan Hall and George King were taken out of the match, with the former having a rib injury and the latter suffering with hamstring issues. They were briefly joined by Elliot Minchella and Jez Litten who passed their respective head injury assessments to finish the game. Lachlan Coote and Mikey Lewis also sustained knocks but were not serious enough to affect their game.

The battle between the sides left gaps in the Robins’ line that Ian Watson’s disciplined side ran through with ease, with centre Henry Cudjoe grabbing a hat-trick before fellow veteran Jermaine McGillvary crossed the line for his 200th Huddersfield try. 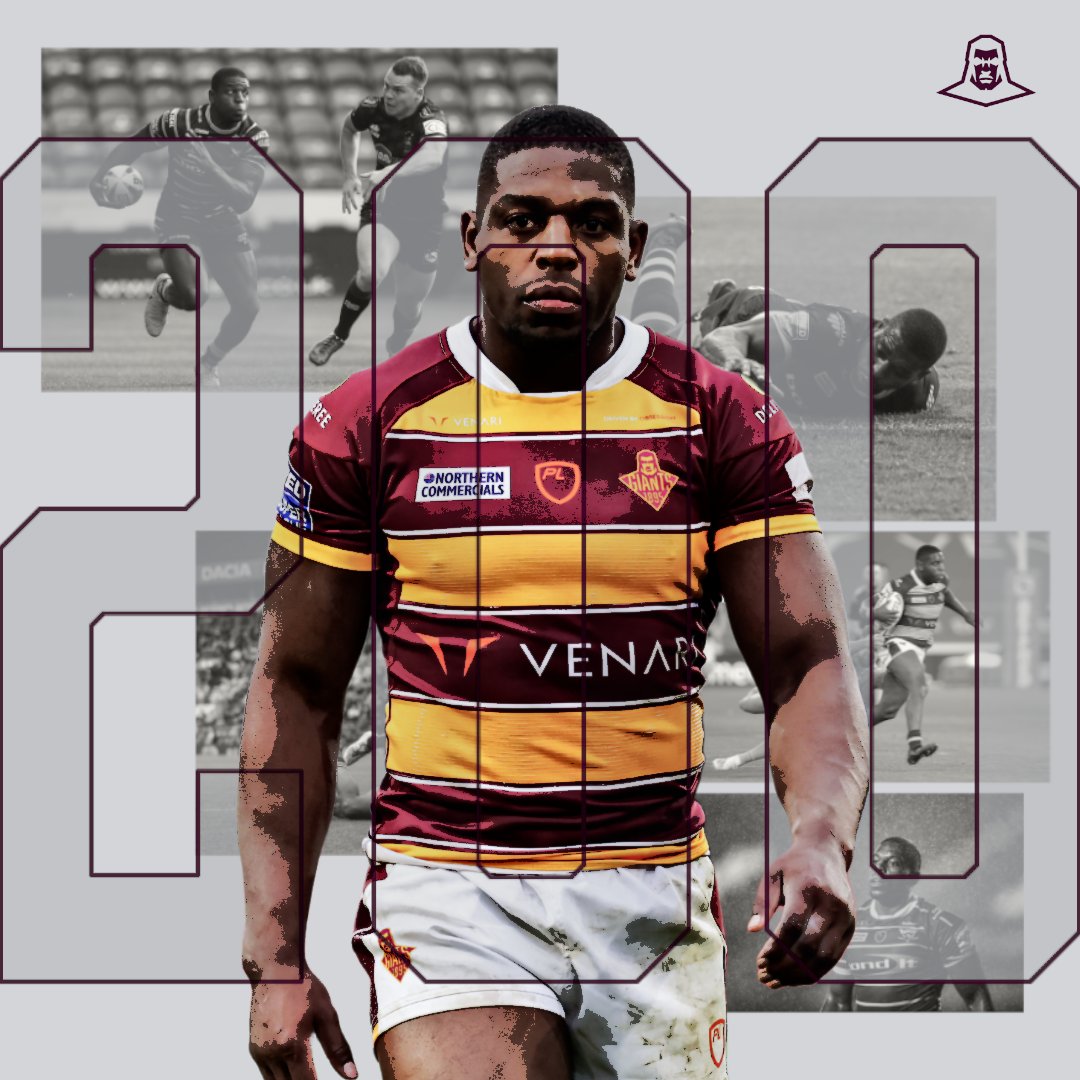 It was an emphatic victory that sees the Giants now a point above Catalans in fourth, almost confirming their status as Grand Final contenders.

Next for Huddersfield is Castleford away on Friday night, and Hull KR go to France to face Toulouse.

Danny Richardson will wake up this morning with a smile on his face after securing a much needed victory over Catalans Dragons via golden point at the Mend-A-Hose Jungle on Sunday afternoon.

A 6-6 stalemate at half-time gave Castleford the initiative to continue scoring into the second half, before Sam Tomkins levelled again for 10-10. The game was a swinging pendulum, where Catalan's next try was immediately cancelled out by a Derrell Olpherts effort and the game was heading to golden point after Michael McIlorum’s try was ruled out for a forward pass.

When the additional time arrived, the teams both had a pop at a drop-goal winner, with Jake Trueman and Sam Tomkins both missing the mark before Danny Richardson struck it home to take the win.

It’s not all rosey for Castleford, who are not without Ryan Hampshire for the foreseeable future after a knee injury. Adam Milner and Liam Watts also took knocks.

Castleford’s next fixture sees them face Huddersfield at the Mend-A-Hose Jungle, whereas Catalans have a massive game against St Helens back in Perpignan in the schedule for next weekend.

Warrington Edge Past Hull At Home

It wasn’t the prettiest game but points are desperately needed for the Warrington Wolves to stop this campaign from getting any uglier. It was 4-0 on the night, with all four points coming from two penalties converted by full-back Stefan Ratchford.

It matches the lowest scoring games for both clubs but it also marked the end of Wire’s run of five games without a win. They made more moves in the market this weekend also, offloading veteran winger Josh Charnley to Leigh Centurions on Friday, before organising a swap deal with Huddersfield’s Jake Wardle arriving at the Halliwell Jones and Toby King heading the other way.

Both teams suffered injuries, with Hull losing Luke Gale after accidentally colliding with Gareth Widdop, before Adam Swift suffered a suspected broken leg and the pair were taken to hospital. Warrington will be without Joe Philbin after suffering a bad knee injury.

Next for the Wolves is Salford at home, and Hull host Leeds.

Miski Stars As Wigan Put Toulouse To The Sword

Lebanese winger Abbas Miski was the star of the show at the DW Stadium on Friday night as Wigan cruised to a 40-6 victory over Toulouse.

Miski signed for the Warriors in the off-season from London Broncos and has featured six times for them this season, with his latest appearance being the best so far, scoring four times on the night.

A 28-0 lead at half-time allowed the side in second to relax in the second half, with Man of Steel leader Jai Field adding another try to his tally, bringing him up to 15 tries for the season, following a try for Toulouse from Cook Islands international Dom Peyroux.

Next up for Wigan is a trip to Wakefield, and Toulouse host Hull KR next Saturday.

St Helens remain atop the Super League table with a 42-12 victory over Leeds Rhinos on Thursday night, with Konrad Hurrell and Alex Walmesley working hard to claim the two points against a Leeds side that continues to lack discipline.

Betfred Super League
@SuperLeague
Round 16 in the books 📚
Which result surprised you the most? 🤔 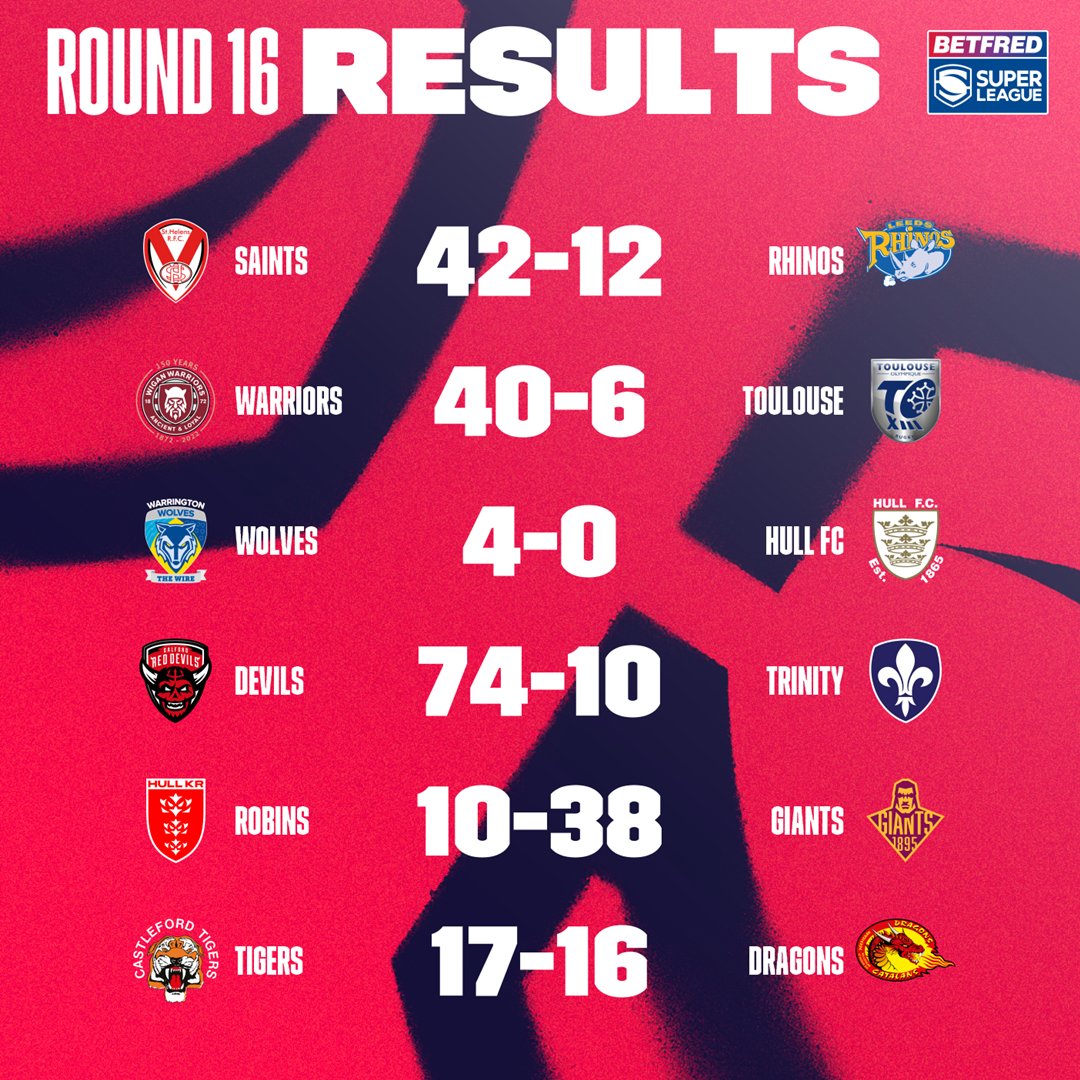 A close first half ended 16-6 in the home side’s favour, but Leeds remained in the game thanks to a try from Harry Newman. Sam Walters nearly brought the scores level at 12-12 but dropped the ball when crossing the line. That woke up the Saints who went on to score again before half-time and began a dominant second half with Hurrell, Agnatius Paasi, Joe Batchelor and Dan Newman all getting on the scoresheet.

Leeds continued to have discipline issues, with Bodene Thompson sin-binned for a trip, before Zane Tetevano was sent off for a high shot on Konrad Hurrell. James Bentley completed the hat-trick, getting his fourth card of the season when he delayed a Saints play of the ball. Rohan Smith has his work cut out for him already.

Next up for Saints is a trip to Perpignan to face Catalans and Leeds face Hull FC at the MKM Stadium.