Football
News
The Arsenal forward struck twice in the second half to give the Gunners victory
Kris Voakes
14:25, 05 Sep 2021

Beth Mead, Vivianne Miedema and Mana Iwabuchi starred for Arsenal as two-time reigning champions Chelsea were beaten 3-2 in the opening game of their Women’s Super League season in a thrilling encounter at the Emirates Stadium

Mead scored a pair of second-half goals to send the majority of the 8,705 fans home happy after an earlier goal from Miedema had been ruled out by Erin Cuthbert’s strike on the stroke of half-time.

The defeat comes as an early blow for Emma Hayes’ Chelsea side, who lost a single game – at home to Brighton & Hove Albion in February – in the entirety of 2020-21. And with Arsenal, Manchester United and Manchester City all having taken three points on the opening weekend, the champions are playing catch-up already in what is likely to be an unforgiving title race this term.

The Gunners were excellent for much of the first half and deservedly had the lead on 14 minutes. Miedema escaped down the left, held the ball well and took an inside track towards goal before firing low past a wrong-footed Ann-Katrin Berger at the near post.

Chelsea were level against the run of play shortly before the break when a right-wing corner fell to Millie Bright, whose shot was deflected into the path of Melanie Leupolz, the German’s cool pass giving Cuthbert the chance to slam in an equaliser. 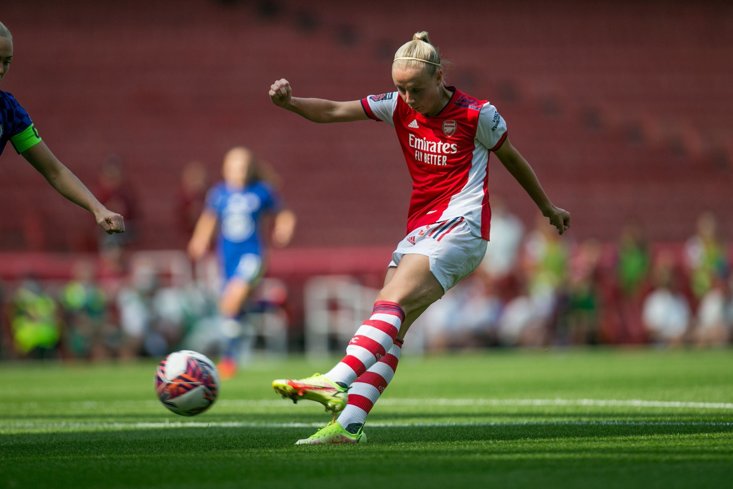 Less than four minutes into the second half Arsenal found themselves back on top with a wonderful second goal. Miedema weighted a through-ball for Mead around the halfway line, and the England international ran through on goal, kept her composure and then drilled a fantastic left-foot effort across Berger and into the far corner from 16 yards.

Chelsea boss Hayes threw on Sophie Ingle, Fran Kirby and Sam Kerr in a bid to gain a bit of an attacking foothold in the game, but Arsenal’s front players soon worked their magic to give the home side a two-goal advantage.

Miedema got free on the right and fed a ball down the line to the onrushing Iwabuchi, whose first-time reverse pass found Mead bearing down on goal to round Berger and tap home. While Mead appeared to have come from an offside position, it was no less a lead than the Gunners deserved.

Back came Chelsea within four minutes, as Pernille Harder rose highest to head home from an Ingle cross and put the champions right back in the game. But Jonas Eidevall’s first game in charge of Arsenal after replacing Joe Montemurro was destined to end in a home win, with the Blues’ frantic late attempts to snatch an equaliser coming to nothing.