For anyone who has ever donned the Dayglo or wrapped themselves in Reusch, Glove Story will have you diving in muddy puddles with joy thanks to more than a handful of memories and memorabilia that shine a light on the concerns and obsessions of those who proudly call themselves a goalkeeper.

From the team responsible for the extremely popular Got, Not Got series this is the perfect stocking filler for anyone who has ever taken their place between the sticks or simply goes wobbly at the knees at the mere mention of Uhlsport, Sondico or Coffer and fully justifies its self-styled description of being the number one book for every goalkeeper, past and present.

Written by former Waterlooville number one and now avid collector of ‘keeper collectables, Rob Stokes, who will donate all of his author royalties from the book to the Willow Foundation, along with Got, Not Got stalwarts Derek Hammond and Gary Silke, it’s clear that this ex-stopper hasn’t lost his passion for a position that anyone who has played or watched the game will always have the upmost respect for.

With more exclusive interviews and anecdotes from some of the game’s goalkeeping greats than you could throw your hat on, Glove Story is more than just a trip down memory lane, it’s an encyclopaedia for ‘keepers everywhere and goes some way to explaining just what makes those who love being in the nets so different, if not dangerous.

Lavishly designed with hundreds of stunning pictures and magnificent illustrations by Doug Nash Glove Story has all of its angles covered and tells it from the perspective of one of the most specialised and isolated roles in sport which only those brave (or stupid) enough have ever dared to do. 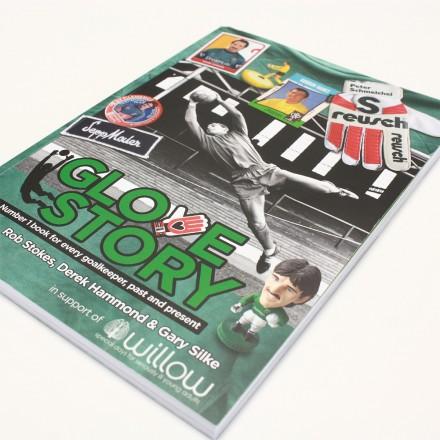 With stories of goalie gear through the ages going hand-in-glove with tips and tales from stoppers who have been there and done it all this is a bible for anyone bonkers enough to go in goal and has everything you’d ever want to know about this ancient art firmly in its grasp, as well as being a visual feast when it comes to brands, kits and characters from the past 40 decades and beyond.

And don’t worry if you’ve never seen the fascination which connects anyone who has ever pulled on the green (or red, or purple, or blue, or silver) jersey, there is something here for football fans of all ages and all positions with fascinating insights into toys, memorabilia and collectables, as well as old ads, coaching techniques, penalty preparation and strange superstitions.

Among the 148 beautifully laid out pages we are informed that Sir Arthur Conan-Doyle, Che Guevara,  Julio Iglesias and David Icke were all once members of the game’s most exclusive of clubs, proving once again, if it were ever needed, that ‘keepers will never really be normal like the rest of us.

However, membership of the goalkeeper’s union is certainly not essential when it comes to getting both hands on this thoroughly enjoyable and visually stunning publication just in time for Christmas.