In 1997, Middlesbrough Football Club reached the finals of both the League and FA Cup, had the might of Emerson in midfield, the dynamism of Juninho Paulista, experienced eye-catching names such as Viv Anderson, Clayton Blackmore and player-manager Bryan Robson, and and of course the goal scoring prowess of The White Feather himself, Fabrizio Ravanelli.

It was a campaign that began with one of the season’s best matches, a thrilling 3-3 draw against Liverpool with Ravanelli scoring a hat-trick on his debut. The season, however, also saw Boro gain the ignominy of becoming the first team to finish in the last two of both major cup competitions whilst also being relegated.

The debut book from British sportswriter Tom Flight, Yer Jokin Aren’t Ya? recounts the quite frankly baffling narrative of that bizarre Boro campaign, driving down to Wembley for the first time since the 1990 Full Members Cup Final, forcing a replay to see where the eventual destination of the League (Coca-Cola) Cup would be, and a final day dramatic drop down to the old First Division..

A season that took place just four years after the inauguration of the new Premiership, it remains one of the most interesting and defining stories of that era’s first chapter. It was created thanks to the dream of a Middlesbrough businessman Steve Gibson aiming to turn an untrendy team from a bleak North-East town into one of Europe’s elite, building a brand new stadium and appointing Bryan Robson as player-manager.

Memorably, Robson was unveiled on Teeside wearing half suit, half kit, and waving a Boro scarf. 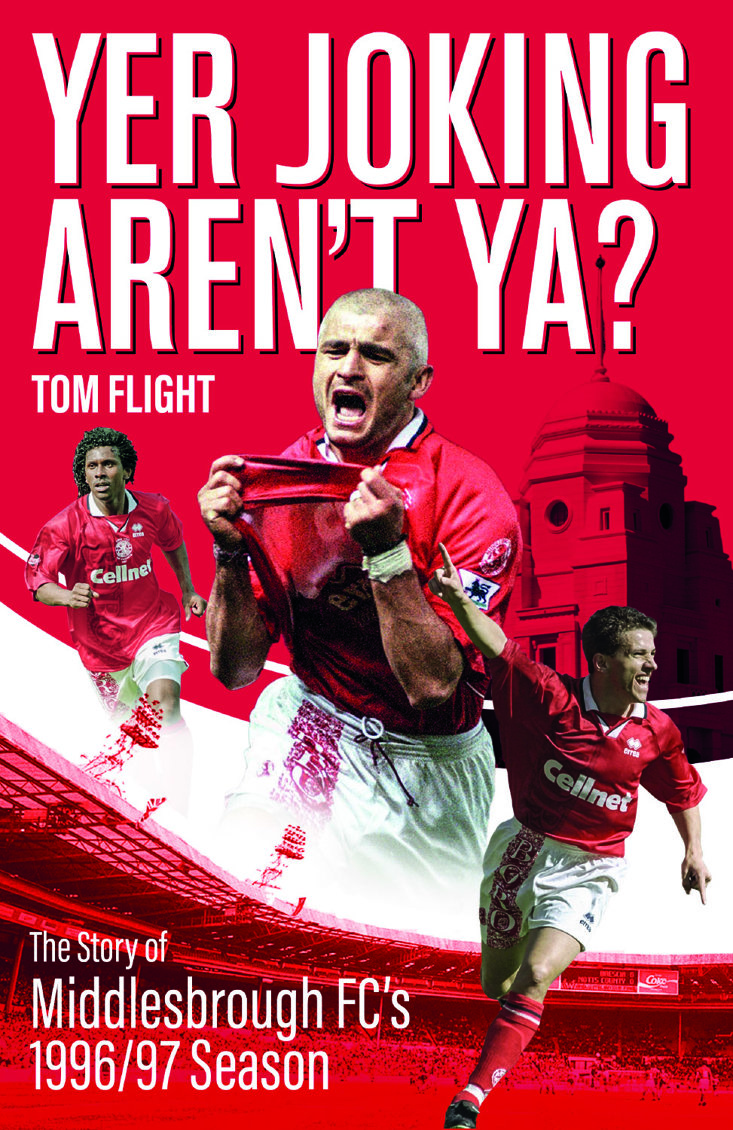 The cups, chaos and calamity are retold by Flight in the timeless tale of a beautiful disaster.

in  a very public and ignominious treble heartache,” informs Flight, “It doesn’t sound like much of a touchstone moment.

“And, whatever Boro fans have persuaded themselves about the quality of the football, the reality is that for long spells an unbalanced and faction ridden Boro team were awful.”

The drama they created still resonates- this wasn’t a team trying to tread water. This is the first Icarus tale in the Premier League of a club aiming high, being burnt and falling.

“Yet time and again, armies of Boro fans cite it as their favourite’ season, their most important season, the

season that shaped their relationship with the club, one that can still stir glowing memories, quicken the

pulse, swell the chest and bring a flush of excitement,” Flight explains, “A lot of that is to do with the sporadic outbreaks of swashbuckling football that fostered genuine optimism and excitement.”

Step-by-step, game-by-game, Flight chronicles the season as it unfolded, and ultimately unravelled.

It covers the blockbusting transfer of the mercurial Ravanelli from Juventus, the Italian striker a recent Champions League winner with the Old Lady, and helps illuminate the impact of the move and the significance of the signing for Middlesbrough, for both those familiar and new to this part of the club and English football’s history.

Flight also describes the drama of the dual cup runs, the detrimental points deduction incurred in the January, and sinking down to the second-tier on the final day of the season.  Yer Jokin’ Aren’t Ya? is an entertaining escapade of an oft-forgotten parable, that Tom Flight has meticulously researched, lovingly recalled, and brilliantly presented.